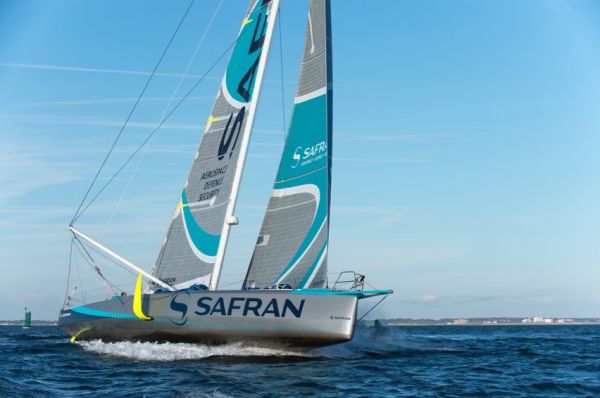 Morgan Lagraviere and Nicholas Lunven's IMOCA 60, Safran at the of the SNSM in Saint Nazaire, France © Olivier Blanchett/DPPI

One reason the Rolex Fastnet Race is the world's biggest offshore yacht race - at present 390 boats are entered - was the decision of the Royal Ocean Racing Club to include non-IRC offshore classes: Volvo Ocean 65, the Class40, IMOCA 60, Multihulls, the latter three have their origins or being most popular in France.

The IMOCA 60s' participation this year will be particularly special as it will be the first time some of the newest generation boats destined for next year's Vendée Globe will line up. Of the 13 IMOCA 60s racing, four are new, built to the latest iteration of the IMOCA rule requiring one design masts and keels. But their most discussed feature is their giant new L-shaped foils, designed to not only to in prevent leeway, but also to operate like Dynamic Stability System-style foils, ie protruding from the leeward side of the boat to create vertical lift, added righting moment and ultimately enhanced performance

This will be Lagravière's first ever Rolex Fastnet Race and the 28 year old former Figaro sailor is excited: "It is a really famous race and this time will be interesting because it will be a test against the other new IMOCA boats." He is also looking forward to being on the start line among such a huge pantheon of top offshore racing boats from around the world.

Of the new Safran, he says: "It is between a Moth and a classic boat. It is not a flying boat - it is still an eight ton boat! It is too early to say anything about the foils because they are so new. We feel the boat is faster off the wind."

Then there is Tanguy de Lamotte on Initiatives Coeur, sailing his third Fastnet: "I have done it twice and I've won it twice - I am undefeated!" he muses, having won in the Class40 comfortably in 2009 and less so in 2011 when his boat was first of four boats that finished within one minute.

"It is great once in a while to mix big boats, small boats, professional and semi-amateurs - because people doing the Fastnet aren't amateur: It is a broad section," says de Lamotte, whose 2008 generation Farr design, was originally PRB. "The Fastnet Race is very famous in France. It is highly regarded, which is why so many people from outside of England come to do it."

Unusually the normally French-dominated multihull and Class40 classes on this occasion aren't French dominated, in numbers at least. For example in the former, Route du Rhum legend Lionel Lemonchois on the 80ft trimaran Prince de Bretagne will be up against three MOD70s, but none French. They include Musandam-Oman Sail, winner of the RORC's Sevenstar Round Britain and Ireland Race last year, the electric lime coloured Phaedo 3 of American Lloyd Thornburg and the latest recruit to Tony Lawson's Team Concise stable, Concise 10, skippered by Ned Collier Wakefield.

Team Concise is also fielding two Class40s, their Ker-designed Concise 8, being skippered by the young talented Jake Trigger, while Concise 2 has been rebranded Hed Kandi, after the Ministry of Sound's record and events company. She will be campaigned by round the world sailor Phillippa Hutton-Squire and an all-girl crew, including former 420 World Champion Annabel Vose.

Surprisingly only seven of the 20 entries are French, the favourite being Marc Lepesqueux on the Pogo S3 L'Express-Les Conquérants de Normandie. The strongest competition includes the two Concise boats, plus Dragon of American Michael Hennessey, the Kiwi 40 Visit Brussels of Belgium singlehanded round the world sailor Michel Kleinjans and the Mach 40 Stella Nova of German Burkhard Keese, all currently competing in the Transatlantic Race from Newport, RI to the Lizard. Then there is Gonzalo Botin's Tales II from Spain, which nearly won in 2013.

"We're amateur sailors with tough demanding professions, only allowing so much time for sailing," explains Franssens. "This will be our fourth Fastnet in the Class40, which we love! With our busy lives it is just manageable and in the Class40 you always have a nice fleet with hot competition. Once you have raced offshore in a Class 40, you'll never go back to the weather rail!"

In the last race they finished seventh and hope to do better with their new boat.

Last but not least are two of the Rolex Fastnet Race's latest entries: both Volvo Ocean 65s, fresh from the recently finished round the world race in Dongfeng Race Team, with its Franco-Chinese crew led by Charles Caudrelier, and the all-women's crew on Team SCA.