Languishing off the Lizard 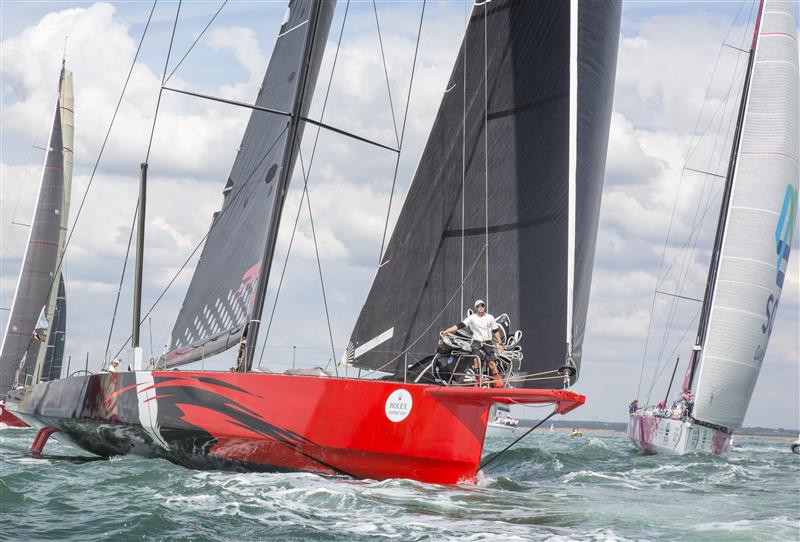 Progress overnight in the Rolex Fastnet Race has been better than expected with the majority of the fleet having been lured out into the middle of the Channel following the temptation of stronger winds.

At 0800 this morning the leading multihulls had passed Land’s End and were tackling the south side of the Traffic Separation Scheme east of the Scillies. Inevitably the larger 40m Spindrift 2 had edged into the lead overnight, but was only seven miles ahead of American Lloyd Thornburg’s MOD70 Phaedo³, tightly bunched in with Musandam-Oman Sail and the Multi 80, Prince de Bretagne. At the time Spindrift 2 was sailing into pressure, making 14 knots while the boats behind were managing only 8-10. At the time Seven Stones light vessel off Land’s End was recording 8-9 knots of wind from the ESE.

The big monohulls in the fleet were doing an impressive job hanging on to the coattails of the multihull frontrunners, which by this stage of the race have normally performed a horizon job on their single hulled rivals. However at 0800 Jim Clark and Kristy Hinze Clark’s 100ft Comanche was just 12 miles astern of Spindrift 2. But the most impressive performance among the big monohulls is that of German Dieter Schon’s Maxi 72 MOMO, second on the water, ahead of both George David’s Rambler 88 and Mike Slade’s 100ft Leopard.

At present the southerly lobe of an area of high pressure is extending across Cornwall and south into the Channel this has slowed the group of boats that has just passed the Lizard. This has principally penalised the IMOCA 60s, which are making just 2-4 knots with the 2013 Rolex Fastnet Race IMOCA winner SMA (previously MACIF) sailed by Paul Meilhat and two time Vendée Globe winner Michel Desjoyeaux nominally out in front. Also in this group of boats going nowhere slowly is the VO70 Camper, the VO65 Team SCA and the 63ft trimaran Paradox.

While it is too early at this stage to consider handicap results, at present Peter Harrison's TP52 Sorcha is leading overall under IRC (and IRC Zero) while in the Canting Keel class it is the Cookson 50 Privateer of American Ron O'Hanley that is ahead, indicating that the first 20 hours have favoured boats of this size. At 0800 Privateer was 12 miles east of the Lizard with Sorcha six miles ahead of her, both boats making 6.5 knots.

Just behind them in the Class40s, it is Tony Lawson’s radical Forty(1)Design Concise 8, being skippered on this occasion by young Jack Trigger, that is leading ahead of Belgium round the world sailor Michel Kleinjans' Kiwi 40 Visit Brussels – Roaring Forty 2 and the favourite, Tales II of Spain's Gonzalo Botin. At 0800 Concise 8 was still 20 miles from the Lizard making 6.4 knots.

“It’s been a tricky - not the easiest of nights. We got pushed a bit down into a Traffic Separation Scheme and got headed with quite a lot of tide while trying to keep the boat going in what breeze we had. The girls have been great; pushing really, really hard, lots of sail changes, lots of sleep, so all good.

“On the course we are doing pretty well. We’ve got 9-11 knots of wind from the northeast, which is more than forecast and so we are pushing along nicely under the big pink Hed Kandi kite.” 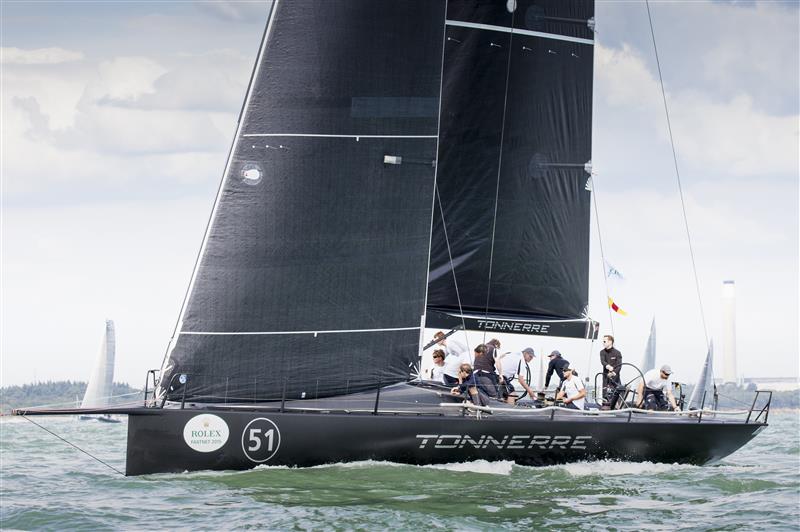 Just behind the Class40 front runners in IRC 1 it is South African Mike Bartholomew’s all-black GP42 Tokoloshe that is leading on the water, but Anita van Oeveren’s US entry the Swan 45 K-Force is ahead under IRC.

IRC 2 has Maxime de Mareuil’s French X-41 Orange mecaniX out in front, but with Ross Applebey’s familiar Oyster Lightwave 48 Scarlet Oyster ahead by a nose under IRC. At 0800 this morning the IRC 2 front runners were past Start Point.

Taking a more offshore option has paid off for the IRC 3 leader, Nicolas Gaumont-Prat’s First 40.7 Philosophie IV and at 0800 this morning she was just three miles astern of Scarlet Oyster and just ahead of a massive glut of boats due south of Start Point. Among this gathering were the 32ft Figaro II one designs, led by Artemis 23 skippered by Andrew Baker.

Just astern of this group, another boat doing well offshore was Noel Racine’s JPK 10.10 Foggy Dew, leading IRC 4 both under IRC and on the water.

To date there has just been one retirement – American Bryon Ehrhart’s Reichel Pugh 63 Lucky, recent winner of the Transatlantic Race. She went aground on the Shingles while exiting the Solent yesterday afternoon and had to accept outside assistance to be towed off.

The forecast today is not good with the lobe of high pressure due to expand creating a windless zone between the Scilly Isles and the Lizard.