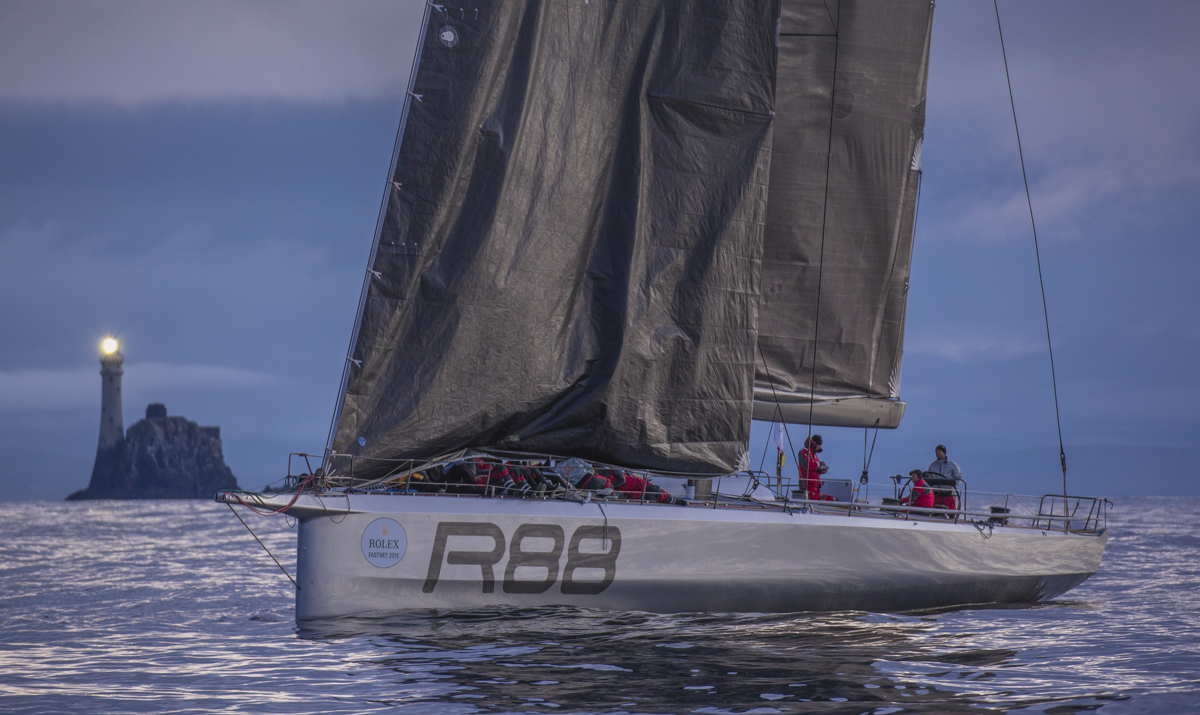 A weak, dying front across southern Ireland and the Celtic Sea combined with an absence of isobars anywhere in the UK made it a most frustrating night for the 350+ crews still competing in the Rolex Fastnet Race. The GRIB files for the race area at present are showing winds of no more than 5 knots between the Fastnet Rock and Start Point and a large hole in the breeze to the west of the front (where the multihulls and big monohulls are) and another hole between the Scilly Isles and the Lizard.

At the head of the fleet the usually speedy multihulls have slowed dramatically on their return journey from the Fastnet Rock, which they rounded late yesterday afternoon. The world’s fastest offshore race boat, the 40m trimaran Spindrift 2, had yet to reach Bishop’s Rock, still 30 miles away at 07:30.

Behind her, on board the MOD70 Musandam-Oman Sail, Irish crewman Damian Foxall was getting the heebie jeebies. While they were making just three knots, out to the east Prince de Bretagne was enjoying a better wind angle, while behind and to the west, Concise 10 was positioned to pick up the new breeze first. “It is very very light and we are just trying to keep the boat moving and heading as close to the mark as possible,” said Foxall.

However the multihulls have made better progress than was expected, Foxall explained: “Yesterday we were able to take advantage of the increase of pressure ahead of the front which was only there for a few hours and got all the big trimarans out to the Rock and half way back again. Now we are in the same big park-up with the rest of the Fastnet fleet and we are going to be here for a while.”

Foxall was still annoyed by a tactical error they had made heading up to the Rock when they had taken a big lift to makea short term gain, ultimately costing them 15 miles. “Sometimes you have to relearn these mistakes! Right now we are just playing the shifts and I guess it will be a bit of a restart when the wind fills in from the southwest,” said Foxall,who reckons they will reach Plymouth sometime tomorrow morning.

The maxi-monohulls have been seeing much more of the Fastnet Rock than they bargained for. Jim Clark and Kristy Hinze Clark’s 100ft Comanche rounded shortly after 0200 BST but an hour later was parked up going nowhere to the northwest of the nearby Traffic Separation Scheme (TSS). George David’s Rambler 88 rounded at 04:50 while at the latest sched Mike Slade’s 100ft Leopard and Dieter Schon’s Maxi 72 Momo are approaching the rock at a lethargic 2 knots. The good news for these two boats is that this morning they have caught up Comanche – Momo was 27 miles astern of her at 0300 and just six miles astern at 0600. However since then Comanche has found some pressure and at the latest sched is making 15 knots.

Boats negotiating the TSS off Land’s End have had the longest night in the fleet. The group that rounded it to the east yesterday afternoon, including some of the world’s fastest offshore monohulls - the IMOCA 60s and the VO70 Camper and the VO65 Team SCA - covered just 22-25 miles over the last 12 hours and are still making only 0-3 knots. Among the IMOCA 60s 2004 Vendée Globe winner Vincent Riou and Sebastien Col have made the best of it on PRB while Team SCA is doing a good job having had plenty of Doldrums practice in the recent Volvo Ocean Race. They are followed by two boats including Derek Saunders’ Carroll Marine 60 Venomous that has done well and is current runaway leader in IRC Zero.

Another group that was passing between the Scilly Islands and the Land’s End TSS has also been having a torrid time, none worse than the trio of Peter Aschenbrenner’s 63ft trimaran Paradox, Andy Greenwood’s IMOCA 60 Rosalba and Pierre Antoine’s 50ft trimaran Olmix. They parked to the south of the TSS at 1700 for two hours, and then, just 12 miles up the track, at midnight parked again for another two hours. This has allowed a fresh wave of boats to catch them up including Mike Bartholomew’s GP42 Tokoloshe II, which currently holds a solid lead in IRC 1.

Overnight a small tranche of boats led by the two JPK 10.10s Stephen Hills’ Just Plain Crazy and Didier Gaudoux's LannAel have made their way up the east side of the Land’s End TSS, but the bulk of the fleet, around 200 boats, this morning is swarming up a 20 mile stretch of water around the southand west sides of the TSS.

Towards the back of this group is the smallest boat in the race, the Capo 30 Santana sailed by Ashley Perrin and yacht designer Merfyn Owen. Their race to date has been one of good nights and mistakes made during the days, the biggest one being yesterday when they headed in towards the Cornish coast in search of a sea breeze that never made its way inshore. To rectify this they had to put in a costly unfavoured tack back out to sea.

Since then they been making up the miles, as Owen explained: “We curved around into the northerly gradient breeze and we have gone all night without stopping, although a couple of miles ahead we can see a huge fleet of boats just sat there.” This morning Santana crossed tacks with one of the same 67ft Challenge Yachts that Owen skippered around the world in 1996-7.

Despite the light conditions, Owen and Perrin are enjoying the race: “It has been great - real fun! We both like light air, but it can be discouraging some times when you get it wrong.”

In IRC 4, Santana is ninth under IRC, while John Burns’ Malo43 Classic Annika is leading and ahead on the water is Noel Racine’s JPK 10.10 Foggy Dew.

While the race has largely been light so far, there is light at the end of the tunnel for competitors. A southwesterly breeze is forecast to fill in from the southwest in the Celtic Sea this afternoon ahead of a front. By the early hours of Wednesday morning 20 knot southerlies are forecast at the Fastnet Rock, spreading across the race track over the course of the morning.