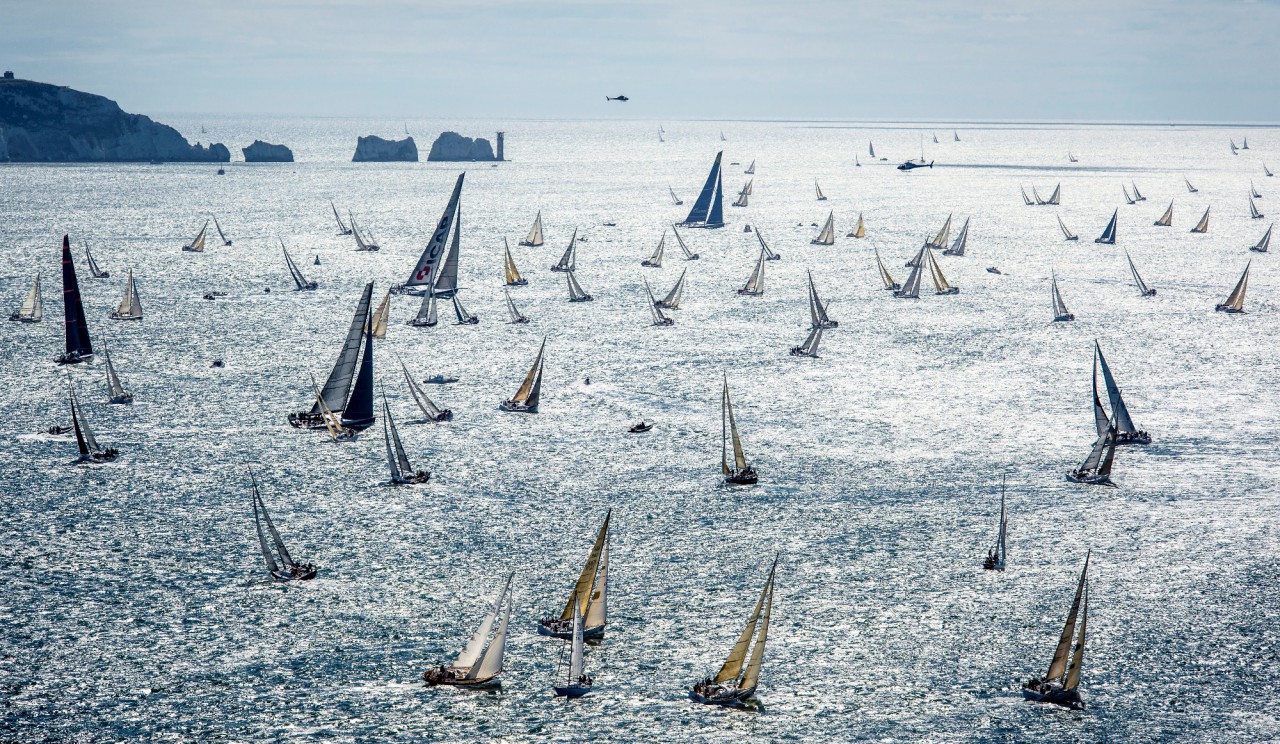 Fleet leaving the Solent at the Needles. Photo: Rolex/Kurt Arrigo

The 46th edition of the Rolex Fastnet Race, which only takes place every other year, starts this Sunday with close to 400 yachts competing. The race attracts the most diverse fleet of yachts, from beautiful classics to some of the fastest racing machines on the planet – and everything in between.

The world's biggest offshore racing fleet will start gathering in the central Solent from about 1000 BST Sunday 16th August 2015 and the start sequence will begin at 1200 BST; the leaders should be approaching Hurst Narrows to exit the Solent before 1300 BST.

Cowes, the spiritual home of yacht racing, has always been the starting point for the Royal Ocean Racing Club's Fastnet Race. Prior to the start, the majority of the Rolex Fastnet fleet will already be moored in the Medina River, Cowes Yacht Haven and Shepards Wharf Marina. Cowes High Street has a myriad of restaurants, pubs and maritime facilities dating back to the early 1700s and is the perfect setting for the start of the Rolex Fastnet Race.

Thousands will watch the start from Cowes. The best views will be: The Parade, Cowes Green and Egypt Esplanade.

Hurst Castle, built by Henry VIII in 1540, marks the western end of the Solent. The historic fortification offers a close-up view of the Rolex Fastnet fleet as they negotiate the Hurst Narrows and exit the Solent. The castle can be accessed on foot from Milford on Sea, along the shingle spit at low tide, or by ferry from Keyhaven.

Yarmouth has been a settlement for over a thousand years and contains some of the oldest architecture on the Isle of Wight, including Yarmouth Castle which was built by Henry VIII in 1547. The Grade II listed Yarmouth Pier offers an ideal vista for the start of the Rolex Fastnet Race.

The distinctive stacks of chalk that rise out of the sea off the western extremity of the Isle of Wight, is the iconic symbol of the island. Perched high above the Needles, the Old Battery offers unrivaled views of the Rolex Fastnet fleet as they leave the Solent. The Victorian fort built in 1862, and used throughout both World Wars, is accessible by foot from Alum Bay and by bus from Yarmouth.

There will be live radio commentary from Fastnet Radio 87.7fm and on social media there will be a live blog on Twitter (@RORCRacing) and Facebook (www.facebook.com/RoyalOceanRacingClub)

You can watch the start live and track the fleet via the Royal Ocean Racing Club's dedicated mini-site. www.rolexfastnetrace.com/

You can also play along with the fleet in the Virtual Regatta.