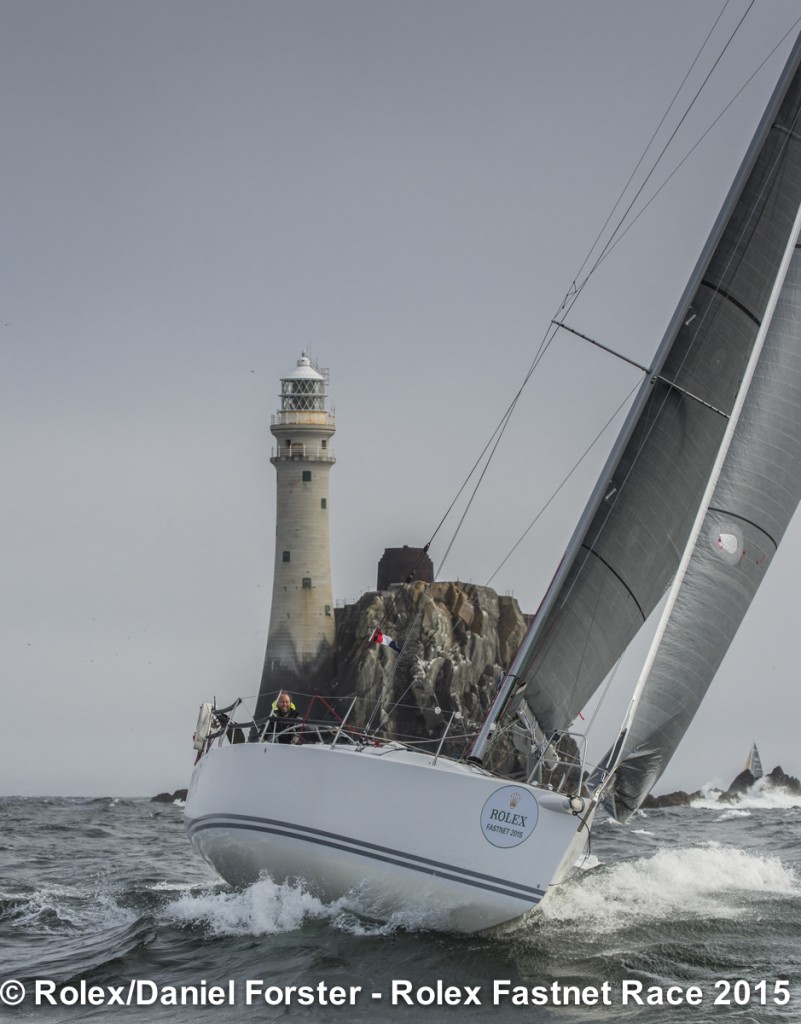 Whilst the giant multihulls and monohulls of the Rolex Fastnet Race have now completed the course, the race for the overall win under IRC is still very much up for grabs. The IRC rating system allows different yachts to race each other and there are also groups of production yachts, and strict one-designs racing for special trophies and bragging rights against their rivals. Private skirmishes abound within the 2015 Rolex Fastnet Race.

22 J/109s represent the largest group of production yachts in the IRC fleet, all competing in IRC 3. Alain Bornet's French team, racing Jai Alai, was the first J/109 to round the Fastnet Rock on Wednesday 19th August 09:14:49. However Jai Alai has the highest rating of all the J/109s due to additional sail area and rather the provisional leader in the J/109s, after IRC time correction, is David Gough's Just So. David is sailing with his wife, Mary and son, William. The crew are all Corinthian sailors and race offshore, primarily in the JOG series. Neil McGrigor's Boo is provisionally third in the J/109s, an exceptional effort as Boo is racing two handed. Neil McGrigor is no stranger to sporting challenges, leading his Ascend the Nile Expedition in which the team traveled an unprecedented 3,300 miles up the world's longest river.

13 Sigma 38s represent the largest one design class racing in IRC 4. The Sigma 38 was born in 1985 when the Royal Ocean Racing Club and the Royal Thames Yacht Club, in wake of the tragic 1979 Fastnet Race, agreed to sponsor a new one design that would stand up to tough offshore conditions. The strict one design stipulates that all yachts must carry exactly the same equipment, right down to the number of gas bottles for cooking. Nigel Goodhew's Persephone of London was leading on the water this morning and due to round the Fastnet Rock at about midday. Skippered by his son Tim, Persephone of London is very much a Corinthian yacht. With Alacrity, sailed by Chris and Vanessa Choules from the RAF Yacht Club in Hamble, Hampshire, is the second Sigma 38 on the water, five miles astern of Persephone of London. Peter Hopps, racing Sam, is third on the water, less than a mile ahead of Tim Levett's MacHismo, whose crew includes Cowes resident, Andy Cassell, Paralympic Gold Medallist and veteran of the Rolex Fastnet Race.

14 Beneteau First 40's are racing in IRC 2 with sailors from Australia, Holland, Great Britain, Russia, Sweden and the United States of America. Gareth Williams' Tarka II of Hamble, sailed by Swedish yachtsman, Rolf Tannergard, was the first to round the Fastnet Rock at 08:23 this morning. RORC Admiral Andrew McIrvine, from London and racing La Réponse, was less than five minutes behind. Galahad Logic, skippered by Philippe Falle from Guernsey, passed the rock in third place for the First 40s and Frans Rodenburg's Dutch team, racing Elke, was the fourth First 40 to turn for Plymouth.