Arrivals in the Rolex Fastnet Race have been trickling, ready for the Thursday-Friday torrent 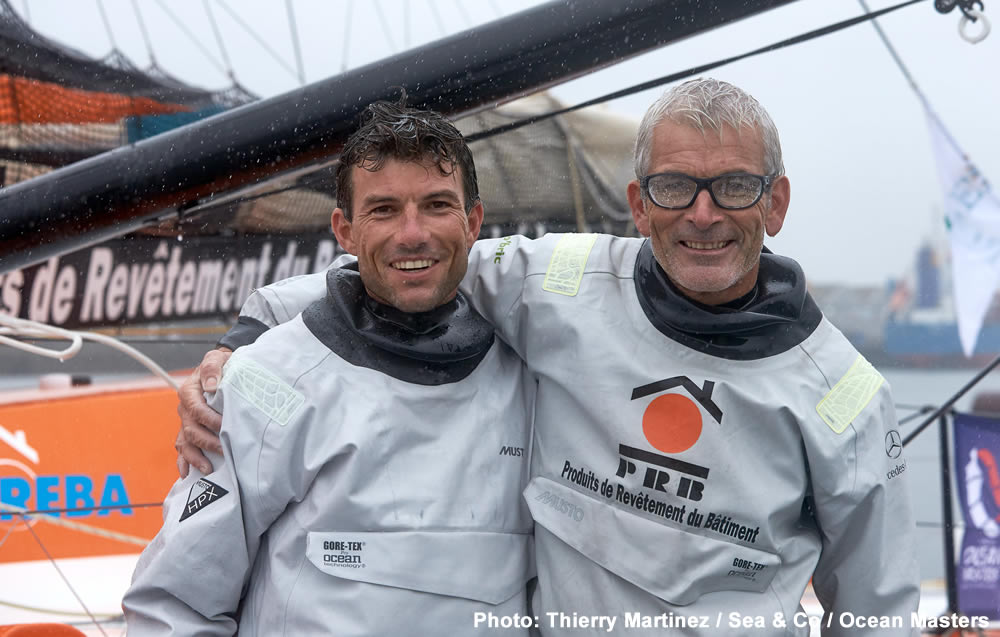 Crossing the Plymouth finish line at 12:19:53 BST, was 2004 Vendée Globe winner Vincent Riou and America’s Cup helmsman Sebastien Col on PRB, the first boat home in the IMOCA 60 class. While the 60s made sterling progress outbound down the Channel, they attempted to go en masse up the eastern side of Land’s End Traffic Separation Scheme. Here they found lots of tide but zero wind from Monday morning until Tuesday morning, progressing up the course on the tide alone.

“These boats are fast enough that we didn’t have to anchor, but we passed Land’s End with the current,” said Col.

However from Tuesday morning the boats were launched. In stark contrast to their drift past Land’s End, the reach back from the Rock was a blast, the boats reaching 25 knots. SMA, the former MACIF – winner of the 2012 Vendée Globe and the IMOCA 60 class in the 2013 Rolex Fastnet Race – had rounded the Fastnet Rock first, but en route back to Plymouth her crew missed the Bishop Rock mark of the course and retired.

The leaders extended between the Scilly Isles and the Plymouth finish line, where PRB took honours, Yann Eliès and Charlie Dalin (who finished 1st and 2nd on their respective boats in this year’s Solitaire du Figaro) on Quéguiner – Leucémie Espoir came home second with Morgan Lagravière and Nicolas Lunven on Safran third, their new boat with its radical side foil enjoying the big reaching conditions coming back from the Rock.

Team SCA, the lone Volvo Open 65 racing in this 90th anniversary Rolex Fastnet Race, reached Plymouth at 12:59:02 BST, behind the first IMOCA 60s but ahead of their Volvo Ocean Race skipper Sam Davies, who on this occasion was racing in the IMOCA class with Tanguy De Lamotte aboard Initiatives Coeur.

Skippering Team SCA in the Rolex Fastnet Race was Dutch Olympic sailor Carolijn Brouwer, with Dee Caffari jumping into her watch leader role. Otherwise the crew was similar to that of the Volvo Ocean Race but with coaching support in the form of Aksel Magdahl helping with the navigation and Martin Stromberg trimming.

“The race was challenging in all sorts of ways,” admitted Brouwer. “The way back from the Rock was fun, but although we passed through the Doldrums four times in the Volvo Ocean Race, we were never becalmed as long as we were during this Fastnet Race! The challenge was to keep everyone focused and not lose the plot.”

Before the race the Team SCA crew had picked three ‘targets’ including the VO70 Camper, (and apparently not including Initiatives Coeur), but having spent the last year racing one design, this proved tricky in the Rolex Fastnet Race.

“We were racing all these different boats going different speeds, lighter or heavier, everyone reacting to the conditions differently,” said Brouwer.

However it was interesting to compare the performance in differing conditions of the VO65 with a VO70 and the IMOCA 60 fleet: The VO65 was slower to get up to speed than the nimble IMOCAs; the VO70 Camper, being raced here by Swede Thomas Nilsson, was potentially faster than the VO65, but Brouwer maintained her crew’s experience coming in race-ready followed the Volvo had paid off and they finished on the VO70’s transom, crossing the line just 10 seconds behind them:

“Them beating us at the finish was quite hard and disappointing but, in the end, it shouldn’t overshadow our having sailed a good race, which we did quite well until the last hour when things went pear-shaped.”

At present there is no news as to whether Team SCA will continue their campaign with the all-girls team through to the next round the world race.

Hot from the Rock

“Thankfully we’re downwind with a good following wind and not too much weather coming back which is nice, as it’s been a bumpy old night, but we’re both doing alright!” Martin reported, adding that they had celebrated the Rock rounding with a much needed tot of whisky.

Regarding the race so far, Martin said that they hadn’t had to kedge in the light winds although they did drift backwards for a time off Portland.

“There are only two of us so it’s a pain to kedge. We did a good manoeuvre around Lizard, went north inshore which gave us a cracking angle with the Code 0 which meant we gained a lot of places. I got the Code 0 a few months ago - money well spent!”

Shortly after rounding the Fastnet Rock, Martin reported that they had 17 knots of wind from 300° and that conditions had dried up, after the front had passed over.

Diablo-J was amid the giant yachting motorway running from the east of the Scillies to the Fastnet Rock. Rounding the Rock Diablo-J was close by the Whitbread 30 May Contain Nuts and the J/109 Jazzy Jellyfish. As to their progress Martin said there were some J/109s around where were a reasonable benchmark. “We think that once we’re more downwind we’ll start to claw back.”