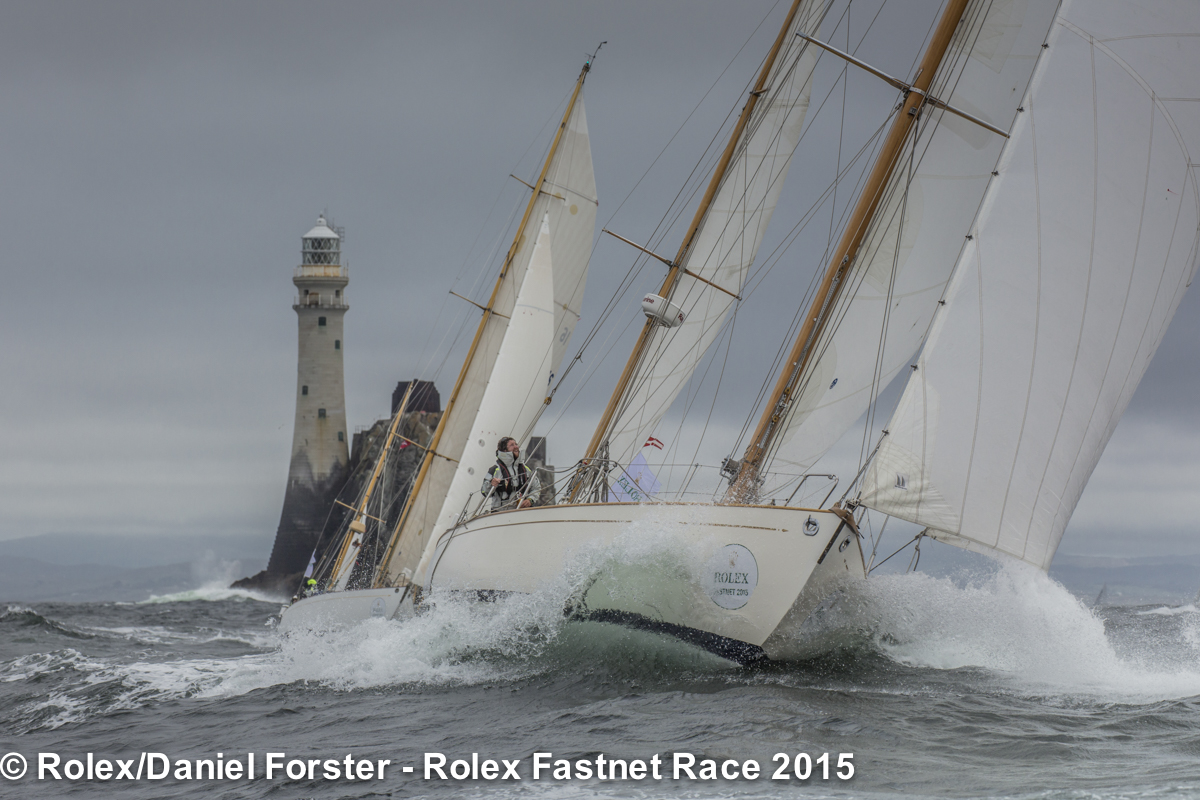 Stormy Weather of Cowes and Dorade round the Fastnet Rock within touching distance of each other. Photo: Rolex/Daniel Forster

Matt Brooks' 52ft yawl, Dorade, won the Fastnet Race in 1931 & 1933. Designed in 1929 by Olin Stephens of Sparkman & Stephens and built 1929–1930 by the Minneford Yacht Yard in City Island, New York. Olin Stephens was skipper through 1932 when he handed the boat to his brother, Rod Stephens. Led by Rod, Dorade sailed to victory in the 1932 Bermuda Race. Dorade sailed to Cowes, winning the Fastnet Race. The victory was of substantial significance given the unusually severe weather. Dorade was completely restored in 1997 in Argentario, Italy. Owner Matt Brooks is extremely fastidious with regards to the authentic appearance of Dorade. For example, the aft deck has a modern satellite antenna which is secured to the deck by an antique brass frame and is concealed under a custom leather cover.

Griff Rhys Jones' 57ft yawl, Argyll, has never competed in the Rolex Fastnet Race before. Designed by Olin Stephens and built by Simms Brothers of Massachusetts USA in 1948. She was design no. 628 from Sparkman & Stephens and the last of the great yawl rigged yachts from the design board of Sparkman & Stephens. Argyll was recently extensively restored at Cockwells, Falmouth Cornwall. This is the first year that Argyll has raced in the RORC Season's Points Championship. Her best result to date was in July winning IRC Four in the prestigeous RORC Cowes-Dinard-St Malo Race; first over the line in class and on corrected time and fourth overall out of 154 yachts including modern yachts designed to the IRC rule.

Infanta, skippered by Freddie Hall and owned by his father John, is a 46ft Rhodes yawl. Infanta was commissioned by Houlder Hudgins, fleet captain of the Indian Harbour Y.C., Connecticut in 1947 and built at Krestzer Boatworks. She was named Infanta after the Spanish flagship of the Havana fleet. An “infanta” is a Spanish princess who will not accede to the throne. The admiral of the original battleship "INFANTA" was good friends with the owner's father. John Hall has owned Infanta since 2012, taking her to the Mediterranean to compete at the Regates Royales de Cannes, Les Voiles de St Tropez and the 2013 Rolex Middle Sea Race.