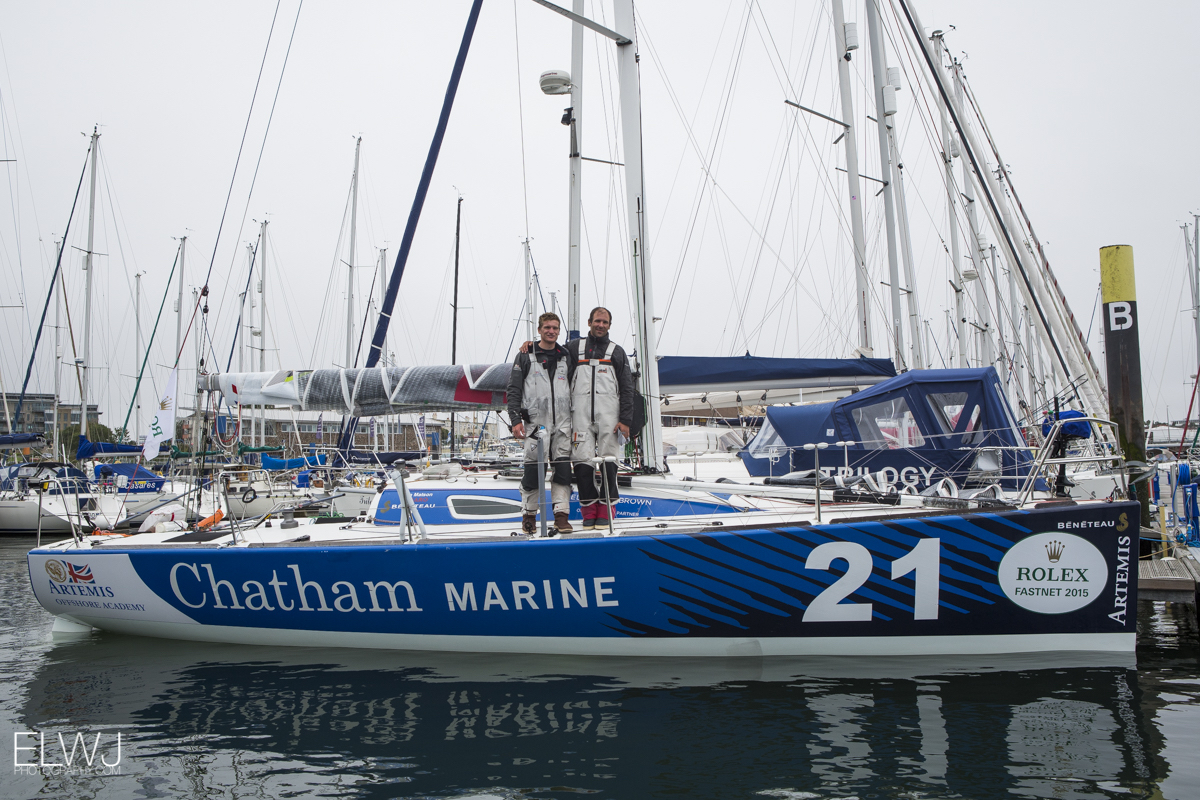 Five boats competed this year in the Rolex Fastnet Race’s Figaro class, all sailed by crews that originated from the Artemis Offshore Academy. The AOA seeks to develop shorthanded professional offshore racing sailors in the UK via the Figaro class, in the hope that one day one of them will go on to go one better than Ellen Macarthur did in 2000-1 and do what to date no non-French sailor has done, and win outright the Vendée Globe, the singlehanded non-stop race around the world.

The Beneteau-built Figaro 32ft one designs are very evenly matched and typically race in a pack so it was with some surprise that in this year’s race there was such a stand-out winner.

Neck and neck coming out of the Solent, the Figaros headed out into the Channel and southwest towards the north side of the Casquets Traffic Separation Scheme (TSS) anticipating a forecast right hand shift. However the tide ended up being stronger than anticipated that left Andrew Baker having to sail northeast or get whisked into the TSS. However Baker recovered nicely and approaching Start Point had pulled out a lead of four miles over the chasing pack.

But as the tide turned at Start Point, Sam Matson on Chatham Marine and Ed Fishwick and Nick Cherry on Redshift made gains by digging in closer to the shore, right into the Cornish coast at Looe.

“We went really far in looking for a little more pressure, closer to the land,” explained Matson. “The wind was westerly but we were expecting a northerly breeze to kick in the evening so we kept hugging the coast waiting for that.”

This, plus the tidal relief they experienced, caused Chatham Marine to pull into the lead with Redshift one mile behind in second as they passed the Lizard.

Matson was competing doublehanded with Gonzalo Infante, famously the Volvo Ocean Race meteorologist (who was to have been doing the race on the VO65 Dongfeng Race Team). The two were paired up by the Artemis Offshore Academy. “He was looking for Figaro experience because he wants to do the Transat AG2R (a two handed Transatlantic Race in the class) and I wanted to gain meteorology experience, learning off someone with lots of experience,” said Matson.

The biggest tactical head scratching in the race came when the two were studying how best to pass the Scilly Isles. They considered going through them, but ultimately chose the central ‘lane’, leaving the Scillies to port and the TSS off Land’s End to starboard.

Winning Figaro races is all about banking small gains and passing the Scilly Isles Chatham Marine had extended her lead to four miles over Redshift. The wind shut down northeast of the Scillies, and during this time Matson tried to work west towards the new breeze. Finally the wind filled in enabling them to hightail it towards the Fastnet Rock.

“With the southwesterlies we got launched, went to the small kite and were just faster so got away,” said Matson. On the leg north they encountered the most breeze of the race – 25 knots.

Chatham Marine rounded the Fastnet Rock at 06:05 BST on Wednesday morning with Redshift 1 hour and 25 minutes behind. From there Matson and Infante were untouchable. Off the Scillies on the return journey they sailed the shortest distance – between the western TSS and the islands, remembering to leave Bishop Rock to port. They reached Plymouth at 12:29:47 BST on Thursday and to give some impression about how well Matson and Infante sailed - their 32 footer finished just ahead of the X-41 Imagine, the First 44.7 Lisa and the Farr 45 People.