Tales from the high seas 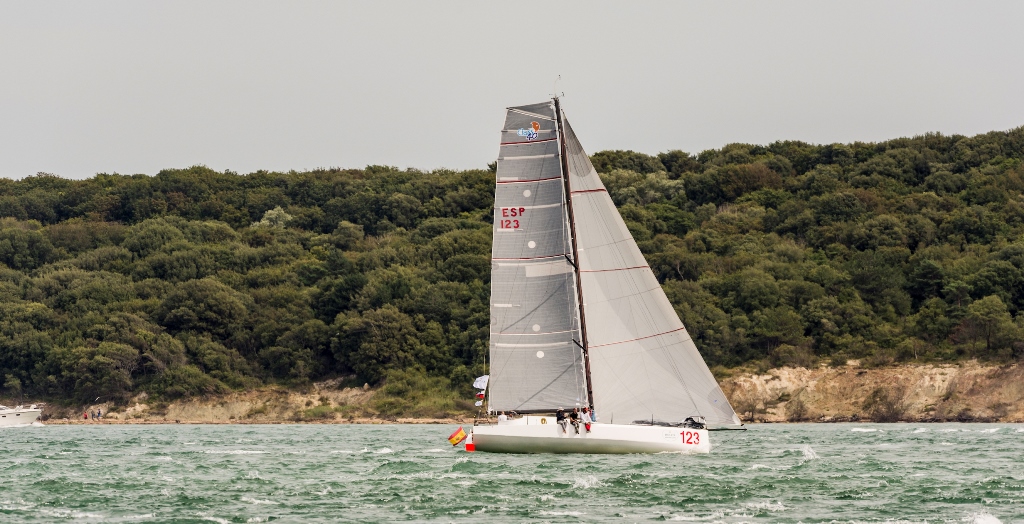 Gonzalo Botin, campaigning Tales II, a design by his brother Marcellino, returned to the Rolex Fastnet Race and succeeded in making reparations after finishing second Class40 in 2013.

This year’s race was no less intense for the Spanish team, who’s crew was the same as it was two years ago, including round the world sailor Antonio Piris and America’s Cup navigator Nacho Postigo.

The Class40s were once again the biggest of the non-IRC classes with 22 boats entered, the whole fleet peppered with talent and big names.

Cabinet Z of France’s Cedric De Kervenoael led the boats away from the Isle of Wight and pretty much all of the Class40s struggled to make it along the north side of the mid-Channel Casquets Traffic Separation Scheme. Some had to sail backwards to avoid being dragged into it by the tide and this immediately split the fleet in two.

After passing the Casquets it was the radical Forty(1)Design Concise 8 that pulled ahead, Tony Lawson’s boat on this occasion being skippered by young gun Jack Trigger.

The frontrunners remained together with Concise leading from Michel Kleinjans' Visit Brussels, Adriaan van Oord's Moonpalace and Tales II, which were alone in tucking in tightly to the Lizard. All of the boats went up the west side of the Traffic Separation Scheme at Land's End with the exception of Silvi Belle 2 of former Caterham F1 CTO Mike Gascoyne and Cabinet Z that left the Scilly Isles to starboard. This play worked and it was Silvi Belle 2, with Route du Rhum winner Phil Sharp on board, that came out on top to take the lead with Concise 8 and Visit Brussels off to leeward as the boats set out across the Celtic Sea.

Concise 8 just managed to regain the lead as she and Silvi Belle 2 rounded the Fastnet Rock and the two boats, along with Tales II, remained locked in contention on the fast run back towards the Scillies having extended away from the chasing pack.

Silvi Belle took the longer offshore route around the TSS to the west of the Scillies as her rivals went inshore, dropping her back to third. From here the race became a match race between the Spanish and British Class40s. Tales II wisely left their gybe for Plymouth as late as possible with the end result that they finished at 21:27 BST last night, some 19 minutes ahead of Concise 8 to take well deserved honours.

“On the Tuesday morning we thought we had no chance of getting back in touch, so we were very lucky,” said Gonzalo Botin. “We know we are no good in light winds, so our goal was to try to stay close to the other boats so when the stronger winds came we could try to recover.” He observed that his two rivals both had chain plate set-ups allowing them a tighter sheeting angle enabling them to fly their Code 0s upwind in light airs.

When Tales II rolled Concise 8, on the way back to the Scillies, Botin said he thought they have it easy after that. However Concise fought back hard – in fact crewman and Figaro sailor Jack Bouttell has been so incensed that he chose to helm for the next five hours straight. As a result a 200 mile match race ensued. “Those guys are young, but very good,” admitted Botin. “We relaxed a little bit having overtaken them but then we were never able to extend.”

Aside from the match race, the ride was also exhilarating.

“At one point we were doing 15-18 knots – it was some of the best offshore sailing I’ve done – really excellent,” said Botin. “We were going very fast but the guys were matching our speed.”

Jack Trigger – sailing his first Rolex Fastnet Race on this, the first occasion he has skippered Concise 8 – admitted that they had poor start.

“It was a case of working through the fleet and keeping the boat speed up. When we left the Solent some sea breeze had kicked in and we were able to catch up the lead pack.”

As with Tales II, the Concise 8 crew knew their beamy powerful Jason Ker design wasn’t suited to the light conditions and they should just keep in touch, so it was with some delight when they led away from the Casquets TSS. “We had 10 knots of wind and 10 knots of boat speed. We knew that the boat is good on a reach, but we were pleasantly surprised at how fast we were.”

Trigger said that they went east of the Scillies because that was best for the tide they were seeing at the time, whereas Silvi Belle arrived slightly later and they didn’t want to go through the middle of the Scillies (as a few boats did) in no wind with lots of tide and rocks to contend with.

According to Trigger conditions on the way back from the Rock changed dramatically with 20+ knots of wind on the beam and low visibility.

“When Tales II caught us up we started to really think what we could do so we hoisted our high clewed reaching sail and we were doing consistently 16-17 knots of boat speed at 100° TWA with one reef in. And the race was incredible! The question was – who could hold the biggest sail and could we get high enough to get around Bishop Rock and still stay fast. You could catch some nice waves and we did a nice job of staying fast - we came alongside them but they hit another gear again and were off. Unfortunately we could never quite catch them.”