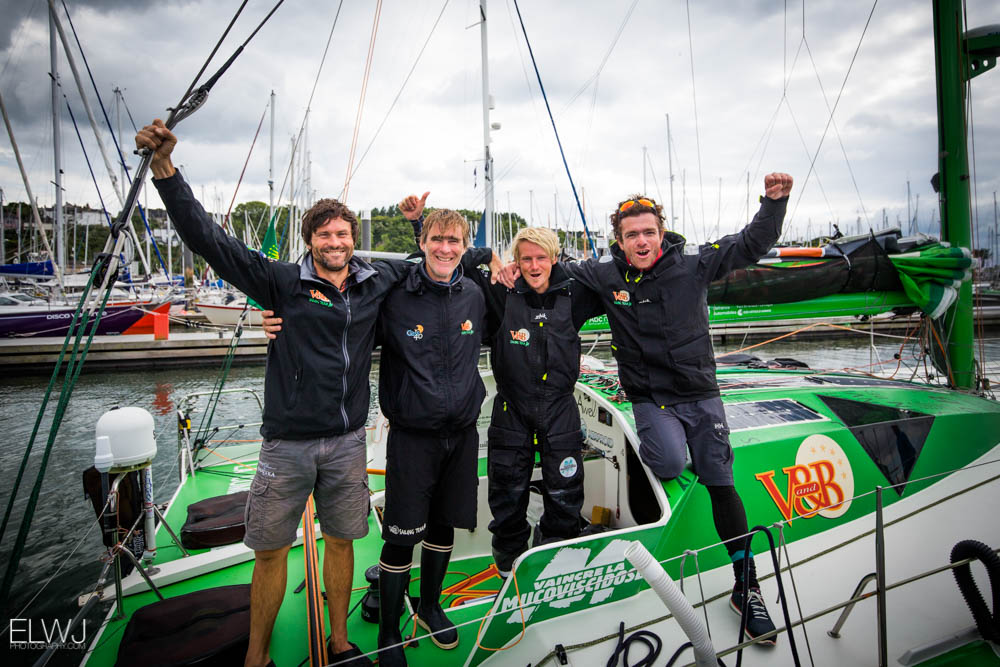 Aside from the Volvo Ocean Race seven, another tight competition in the Rolex Fastnet Race has been between the twenty six Class40s racing.

These boats are designed to a box rule created in France in the early 2000s. With more than 150 examples launched in the last 13 years, it is also highly international with boats competing from crews as far afield as Oman, South Africa and Japan, ranging from professionals (both old timers and budding youngsters) to enthusiastic amateurs.

The Class40 leaders arrived in Plymouth this afternoon, with victory finally going to V and B skippered by Frenchman Maxime Sorel. He arrived at 14:32 after 3 days 3 hours and 22 minutes.

According to Sorel they had been swapping the lead with Imerys, skippered by Jersey’s Phil Sharp down the Channel but, “after Wolf Rock it became difficult for us - we had no wind on two occasions and then we lost second place.” By giving the Bishop Rock TSS a wider berth than the front runners, V and B was able to pull into the lead, which she held to the finish.

Racing on board V and B was Sam Manuard, the boat’s designer, also an accomplished sailor and possibly another reason for their victory. The latest v3 incarnation of Manuard’s Mach 40 is a powerful reaching machine and they proved untouchable between Bishop Rock and the finish. 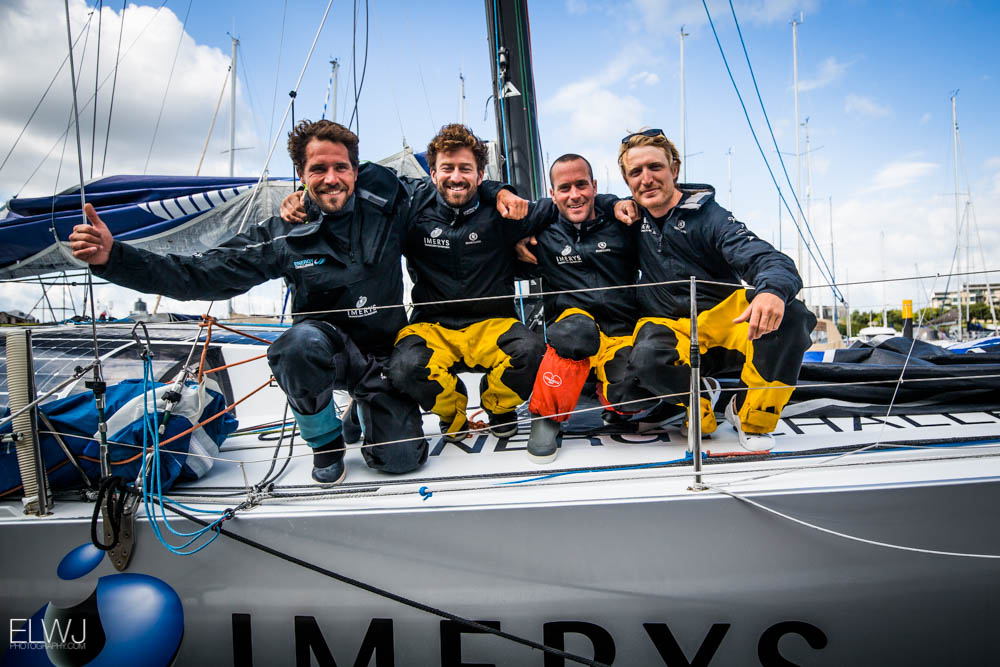 The majority of the race, especially outbound to the Fastnet Rock was led by Jersey’s Phil Sharp on board the v2 generation Mach 40, Imerys. “Every Rolex Fastnet Race is very unique,” said Sharp.

“In this one we had someone breathing down our neck the whole way – either V and B or Campagne de France - and we had no time to relax whatsoever until we got up to the Fastnet. It is so tactical going upwind, it was hard to predict who had the best strategy until you all met up at the Rock.”

When Imerys was becalmed off Land’s End outbound she doubly lost out as the boats behind sailed round them. Reaching the Fastnet Rock came as a huge relief after three days on the wind:

“It felt like all the work we had done to get to the Fastnet had paid off with the trip home. It was just amazing to put up the spinnaker – I had almost forgotten what it looked like!”

Back from the Rock, they experienced supreme sailing with 25-27 knots of wind, enough to make the Class40 plane. “You could play the waves like a dinghy,” described Sharp. “That was an amazing moment –piling down the waves under a full moon.”

Also proving its worth was Campagne de France, designed and skippered by French offshore veteran Halvard Mabire and his accomplished British partner Miranda Merron. Campagne de France led the Class40s into the Celtic Sea and later around the Fastnet Rock and back down to Bishop Rock.

“We are a bit disappointed, but finishing third out of 26 is not bad,” recounted Merron. “Most of the upwind was pleasant, but we felt for the poor boats we passed last night when we were flying downwind at 15-18 knots, who were beating to the Rock after the wind had shifted… It was really nice to race against such a big fleet and to pace ourselves with them.”

Aside from some incredible sailing back from the Rock, they had also enjoyed a spectacular sunset yesterday evening, much attention from dolphins and also from some nasty clouds which had played havoc with the wind.

Arriving on the heels of V and B was a fight between two of the more comfy racer cruiser catamarans, the TS42 Guyader Gastonomie of Christian Guyader, narrowly beaten on the water by the larger HH66 R-six of Pole Robert Szustkowski. On board the former was 2015 outright Rolex Fastnet Race winner Géry Trentesaux. He was pleased they had arrived within five minutes of their substantially bigger rival and ahead of all but one Class40, despite the predominantly upwind race.

Christian Guyader is a major backer of sailing in France via the seafood company that bears his name so the standard of cuisine on board his boat was exceptional.

“The catering was good. We would sit at the table for both lunch and dinner,” said Trentesaux. “It is very comfortable because you don’t have to sit on the rail; we have our own cabin and everyone can sleep when he wants. Sometimes it is difficult in light weather with waves and in under 5 knots it’s quite difficult. In about 10 knots she is okay and in 15 knots she’s so fast. We stayed up with the IMOCA 60s and the bigger boats for all the first day, upwind.” Downwind back from the Rock they had been making 15-30 knots. “The boat is super comfortable and so easy.” 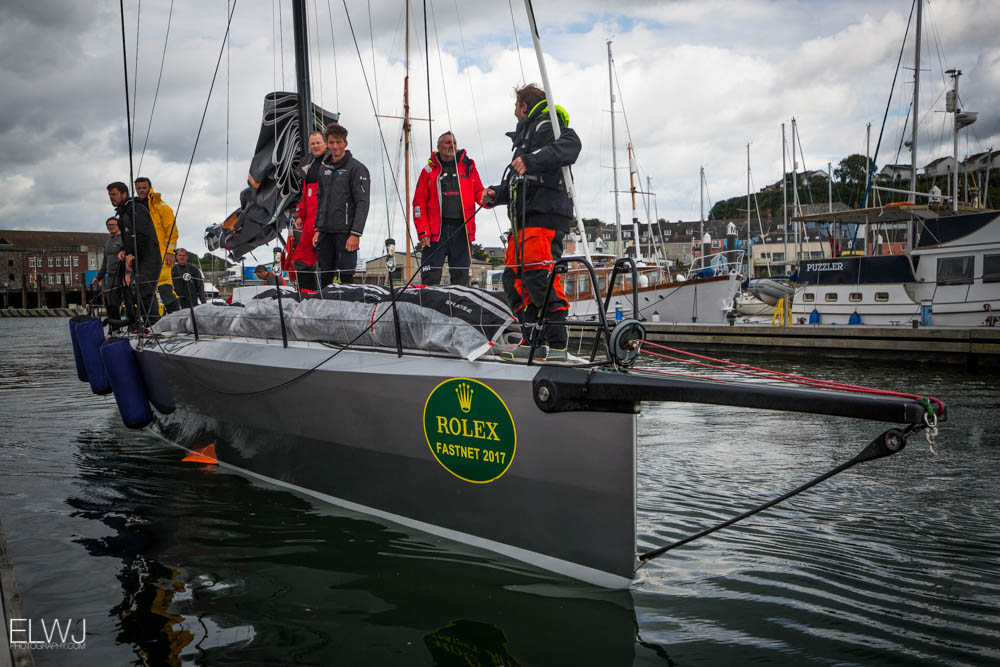 Another boat that enjoyed the strong blast back from the Rock was Quentin Stewart’s DSS-equipped Infiniti 46 R, Maverick. Stewart said:

“The race was tiring - hard work and too much upwind! They need to redesign the course, it’s the wrong way round, 400 miles upwind and only 200 down. The Rock was awesome. We were really going fast. - I saw 24 knots, we were certainly out of the water.

“The legends were the people we saw sailing the other way at 0400. As we were smacking downwind, they were heading upwind – no joy in that! There’ll be some people out there for quite some time and they deserve all the respect.”

Overall in the race, American Ron O’Hanley’s Cookson 50 Privateer is looking strong for the overall prize under IRC, but there are plenty of smaller boats still capable of winning. Privateer is also looking good to win IRC Z ahead of the Ker 46 Lady Mariposa. 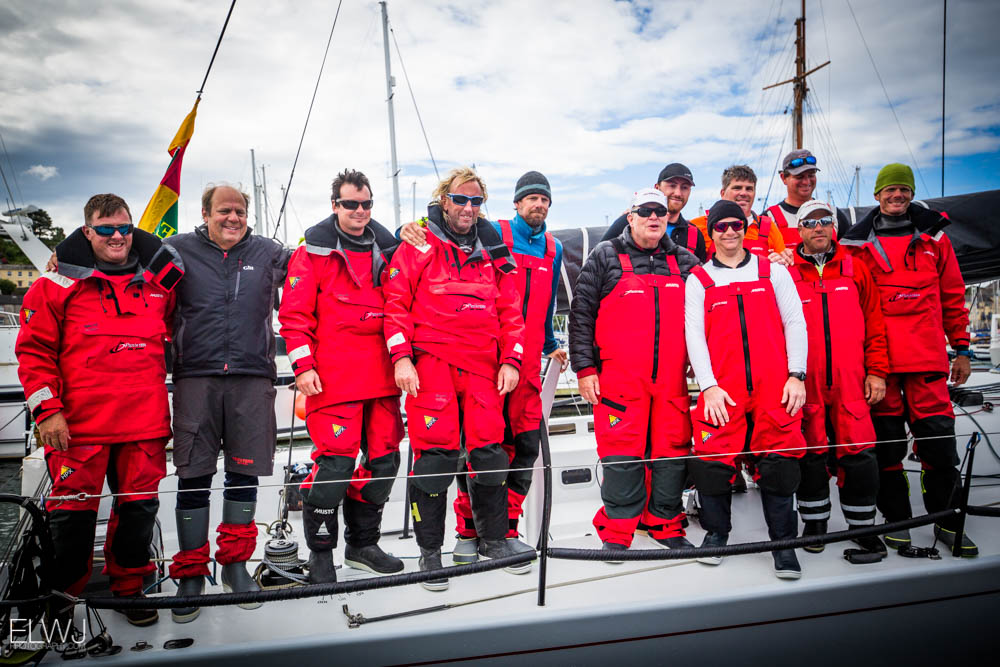 The boats in IRC One are due to arrive tomorrow with Jean Claude Nicoleau and Nicolas Loday’s Grand Soleil 43 Codiam and the Mylius 15e25 Ars Una skippered by Vittorio Biscarini both vying for victory.

IRC Three and Four are again being dominated by the French-built JPKs. In the former is a very tight battle between the JPK 10.80s, Marc Alperovitch’s Timeline and Stephen Hopson’s Blue Note, while in the latter it is between two JPK 10.10s the Loisin father and son’s 2013 winner, Night and Day and Noel Racine’s Foggy Dew.