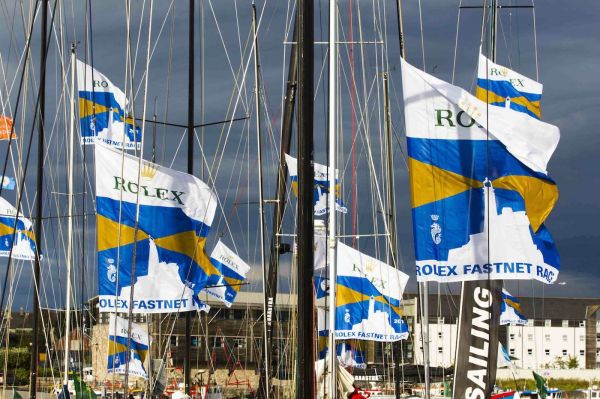 A record 314 starters with high drama and new monohull and multihull records; the 2011 Rolex Fastnet Race was one of the most memorable in history.

Niklas Zennström's  Ran 2 won the Fastnet Challenge Cup Trophy, the race’s first back-to-back winner in more than 50 years. Second on corrected time was Mike Slade's Maxi ICAP Leopard, which the capsized Maxi Rambler 100 had been leading until her sudden overturn at the beginning of the home leg, just around Fastnet Rock. All 21 crew were rescued safely.

Records tumbled in the 2011 Rolex Fastnet Race, this year's event living up to its reputation as the most gruelling and tactically challenging of the classic offshore races. As usual the 608 mile long course took the boats from the start line off Cowes, Isles of Wight towards the Fastnet Rock off southwest Ireland, back around the outside of the Scilly Isles off southwest England to the finish line in Plymouth.

On Sunday 14 August, 314 boats set sail - the largest ever Rolex Fastnet Race fleet - up from the previous record of 303. This was due to a new initiative from race's organisers, the Royal Ocean Racing Club, to invite 'professional' offshore classes, able to compete under their own class rules, over and above the IRC fleet, that was capped at a maximum of 300 entries. The result was the most diverse selection of yachts ever assembled in a single offshore yacht race with the new initiative attracting many high-profile international racing teams. Thus in the same race some of the world's fastest multihulls such as the 140-foot long trimaran, Maxi Banque Populaire were lining up with Contessa 32s and pilot cutters with the complete pantheon of racing yachts in between.

A coup for the event was the participation of three Volvo Open 70s, the only occasion these boats would race together prior to this autumn's start of the fully crewed round the world race. The 'pro' classes also saw the race debut of the two Multi One Design 70 foot trimarans, and attracted six IMOCA 60s, best known for competing in the singlehanded non-stop round the world race, the Vendee Globe, plus an impressive fleet of 20 of their smaller cousins, the Class 40.

Leading the charge in the IRC fleet were the two 100 foot maxis Rambler 100 and ICAP Leopard, followed by the Farr 80 Beau Geste and Mini Maxis such as the 2009 Rolex Fastnet Race winner, Niklas Zennstrom's JV72, Rán, and Andres Soriano's Mills 68, Alegre, but the bulk of the record-sized fleet were more regular yachts with amateur crews from a total of 20 nations. For many, participation in the Rolex Fastnet Race was the highlight of their sailing seasons, for others the pinnacle of their sailing careers.

Off the Royal Yacht Squadron platform, the fleet starts began with the multihulls and culminating with the canting keel monohulls and VO70s, the boats enduring a stiff beat out of the Solent and into the English Channel in the best Rolex Fastnet Race tradition. With winds gusting to 30 knots at the exit to the Solent at Hurst Narrows, there were the first dramas of the race with the Class 40, Eutourist Serv-System and the trimaran, Strontium Dog (GBR) dismasting, plus two collisions.

As expected Banque Populaire, Gitana 11 and the two MOD70s trimarans set off at lightning speed down the race course. While Gitana 11, skippered by Vendee Globe and Volvo Ocean Race skipper Seb Josse was constantly nipping at her heels, the world's fastest offshore boat, Maxi Banque Populaire, skippered by French offshore legend Loick Peyron, as expected proved the pace-setter. After being on the wind all the way to the Rock, the trimaran took off on a reach on her way back to the finish in Plymouth. Crossing the line Monday evening in a time of just 1 day, 8 hours, and 48 minutes, the world's fastest racing trimaran established a new outright record for the Rolex Fastnet Race - some 7 hours and 39 minutes quicker than that of the best previous time set by a multihull.

Unfortunately as this was happening, drama was unfolding close by the Fastnet Rock. While Mike Slade's ICAP Leopard, two-time line honours winner in this event, led the monohull fleet down the English Channel and into the Celtic Sea, George David's Rambler 100 finally overhauled them on the way to the Rock. Rambler 100 rounded the Rock at 17:25 BST and turned south for the Pantaenius offset mark into 25-30 knot headwinds and a sizable short sharp sea. Shortly after this, the fin for her canting keel snapped just below the hull exit causing her to capsize almost instantaneously.

Three crew were lucky and climbed straight on to the upturned hull as she capsized, the rest ended up in the water, including four who had been down below at the time. With a massive struggle in the difficult conditions, the majority of her 21 crew, managed to clamber up on top of the upturned hull, while five, including skipper George David, alarmingly drifted away from the boat. Fortunately, the five tied themselves together, and they were recovered after having spent 2.5 hours in the water, while the remainder of the crew were picked up by the lifeboat from nearby Baltimore. Incredibly, everyone was rescued - this through the combined heroic efforts of the Valentia MRCC, the Baltimore Lifeboat, and the dive vessel, Wave Chieftain. The shaken crew were taken to Baltimore while David's partner Wendy Touton was airlifted to hospital, suffering from hypothermia, and later released. Remembering the 1979 Fastnet disaster, many local residents in Baltimore offered the shaken Rambler crew unparalleled hospitality upon their arrival.

After the terrible Rambler incident, Mike Slade's ICAP Leopard once again took the lead in the monohull fleet, but after rounding the Fastnet Rock and cracking off, the 100 foot maxi was rapidly overhauled on the leg back to the Scilly Isles by the three VO70s. After a spectacular race where each of the three boats, Abu Dhabi, Groupama 4 and Team Sanya held the lead at some point, Groupama 4 led back from the Fastnet Rock only to be pipped at the post by the Farr-designed Abu Dhabi, skippered by double Olympic silver medallist Ian Walker - with just 4 minutes 42 seconds separating her from Groupama 4, skippered by French non-stop round the world record holder Franck Cammas. In the process, Abu Dhabi also broke ICAP Leopard's monohull record for the Rolex Fastnet Race with an elapsed time for the course of 1 day, 18 hours, 39 minutes.

Following them in mid-Tuesday morning, was a similarly tight finish between the IMOCA 60s with 2004-5 Vendee Globe winner Vincent Riou completing the course in 1 day, 23 hours, and 21 minutes, ahead of double Barcelona World Race winner Jean-Pierre Dick on Virbac Paprec 2 and double Velux 5 Oceans winner Bernard Stamm aboard his new Cheminees Poujoulat, the top three separated by less than five minutes.

Prior to the start of this Rolex Fastnet Race the forecast for brisk winds for the first two days followed by light conditions mid-week, indicated that the event would favour the larger, faster boats on handicap.

After ICAP Leopard, the next IRC arrival was Niklas Zennström's Rán at 12:53:44 BST on Tuesday, in an elapsed time of 2 days 3 minutes and 44 seconds and even upon her arrival the silver hulled Judel Vrolijk 72 was looking strong to take the overall prize in the Rolex Fastnet for a second consecutive time. Her race had been made easier with her immediate competition retiring - the Farr 80 Beau Geste, with a crack in her deck and Andres Soriano's Mills 68 Alegre, with a broken rudder tip.

On Wednesday, pace in the Rolex Fastnet Race slowed with the onset of a high pressure system over parts of the race course, leaving many yachts becalmed, particularly around the Scilly Isles and along the south coast of Cornwall. The light winds continued into Thursday as the bulk of the fleet approached the Plymouth finish. Boats arrived with wind, only to be stalled on a foul tide, so there were several virtual restarts approaching the line and on Thursday night after the tide turned over a period of just two hours, an armada of 105 boats crossed the finish line, the crews arriving with tales of prolonged periods they had to anchor to avoid going backwards.

Niklas Zennström's Rán was confirmed as the overall winner of the Rolex Fastnet Race, the first time a boat had won consecutive races since Carina II in the 1950s.

"It's fantastic, really, really good," said Zennström of his second victory. "Everyone on the team is very happy and very pleased. I think we've never sailed better as a team. We sailed the boat very hard, we were never kind of relaxed, we were very focused all the time and we pushed the boat a lot."

With the exception of Rán in IRC Z, ICAP Leopard in the Canting Keel class and Rives

Potts' McCurdy & Rhodes 48 Carina (USA) in IRC 2, French teams won the three other IRC classes and held the majority of positions on the podium. IRC 1 went to regular RORC race competitors Nicolas Loday and Jean Claude Nicoleau on their Grand Soleil 43 Codiam. Class 3 was won by Noel Racine's aboard his JPK 10.10 Foggy Dew, while once again in IRC 4 victory went to Jean Yves Chateau's Nicholson 33, Iromiguy, overall winner of the Rolex Fastnet Race in 2007.

Eddie Warden Owen, CEO of the Royal Ocean Racing Club, summarised: "It's been a really interesting race because it offered everything: It's been a tough race - not just because of the wind conditions on the first two days, but also tough getting back for the little boats because they have had very little wind, they've parked up. And we had the Rambler incident and the first boat arriving after just 32 hours. Then the Volvo guys finishing within five minutes was amazing and the Class 40s had a really close finish. Maybird and Morwenna, the two pilot cutters, are having their own battle out there - they'll be in next week. So this Fastnet's been full of opportunities for people, an experience for everybody involved in it."

As of 1200 BST there were six boats still racing, expected to finish today, including Edith Gray, Freebird, Brisbane Star, Rainbow UK, Morwenna, while Maybird is due in early Sunday morning.