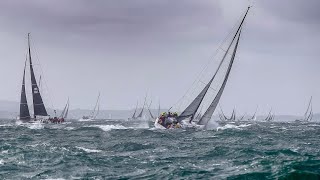 The 49th Rolex Fastnet Race closed with a celebratory prize giving in Cherbourg, France for all class winners. The most significant trophy awarded was the Fastnet Challenge Cup presented to Tom Kneen and the British crew of Sunrise for winning the race overall under time correction. The 2021 Rolex Fastnet Race, held under extraordinary circumstances, had proved once again why it is the biggest and among the most challenging of offshore races. The Rolex Fastnet Race is organized by the Royal Ocean Racing Club and has been partnered by Rolex since 2001. The race is a legendary sporting contest that demands the very best from crews aspiring to complete the 695 nautical mile course. Discover more https://on.rolex.com/3AK78GI Rolex has always associated with activities driven by passion, excellence, precision and team spirit. The Swiss watchmaker naturally gravitated towards the elite world of yachting six decades ago and the brand’s enduring partnership now encompasses the most prestigious clubs, races and regattas, as well as towering figures in the sport, including ground-breaking round-the-world yachtsman Sir Francis Chichester and the most successful Olympic sailor of all time, Sir Ben Ainslie. Today, Rolex is Title Sponsor of 15 major international events – from leading offshore races such as the annual Rolex Sydney Hobart Yacht Race and the biennial Rolex Fastnet Race, to grand prix competition at the Rolex TP52 World Championship and spectacular gatherings at the Maxi Yacht Rolex Cup and the Rolex Swan Cup. It also supports the exciting SailGP global championship in which national teams race identical supercharged F50 catamarans on some of the world’s most famous harbours. Rolex’s partnerships with the Cruising Yacht Club of Australia, Royal Ocean Racing Club, Yacht Club Costa Smeralda, Yacht Club Italiano, New York Yacht Club and Royal Yacht Squadron, among others, are the foundation of its enduring relationship with this dynamic sport. #Rolex #RolexFastnetRace #Perpetual
136332
813
16 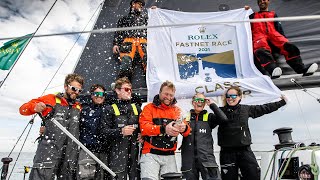 Tom Kneen’s JPK 11.80 Sunrise has sewn up IRC Two in this 49th Rolex Fastnet Race. The Devonshire team crossed the Cherbourg finish line at 1004 BST this morning. Sunrise’s corrected time of 4 days, 6 hours, 45 minutes 4 seconds has given Kneen IRC Two victory by a huge margin. As Sunrise finished, her closest rival was just past the Lizard with more than 120 nautical miles still to sail. After a hideous outbound beat down the Channel, when they never seemed to be in phase with the tide, Sunrise’s first break came after making the last minute call to go up the eastern side of the traffic separation scheme at Land’s End with Il Corvo as the majority of the frontrunners chose to go up the TSS’s west side. Rounding the Fastnet Rock on Tuesday mid-evening, Sunrise already had pulled out a 1 hour 12 minute lead under corrected time. But the key moment of her race came as, while she was forging past the Lizard, the wind utterly switched off for those astern as an area of high pressure rolled over them. “There was a big ridge chasing us at 10 knots, so we just had to go faster than 10 knots the whole way down there,” explained Dave Swete, Sunrise’s sole pro sailor. “It never caught us, but it caught the rest of the guys which I think went down to our fighting hard at the start and when we were fighting current for the first half of the race.” A jubilant Kneen shared his take on this: “The key moment was at the Scilly Isles when we were trying to hold on to the original wind to get us safely into the Channel. All of our weather routing said we’d be stuck in the light pressure, and we had chosen the sails that we believed we needed to deal with that.” From there, the crew kept their fingers crossed, while looking over their shoulders. As they arrived in Cherbourg having straight-lined it from the Scilly Isles, their competitors were still on a very different part of the chart. “We feel very fortunate to have made it here, arriving at a good time for the strong tides just before the finish,” said Kneen. “But there really was no relaxing until we actually crossed the finish line. Nothing is ever certain in this game.” #RolexFastnetRace
6734
82
2 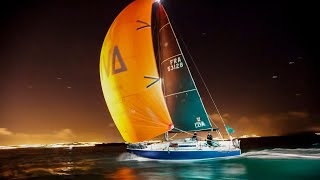 One of the most intense battles, both on the water and under IRC corrected time, in this year’s Rolex Fastnet Race played out in IRC Three. Here the scratch boat was unquestionably the JPK 1030 Léon, skippered by the defending IRC Three and Two-Handed champion and former overall winner of the Rolex Fastnet Race, Alexis Loison, racing yet again doublehanded, but this time with Guillaume Pirouelle. Interesting was the diversity of crew make-ups: Fully crewed, doublehanded or mixed doublehanded, it seemed to make no difference to the competitiveness of the top boats. While the lead doublehanders in IRC Four were occasionally in the mix, it was mainly the doublehanded crews in IRC Three that held the top places in the IRC Two-Handed ranking. After surviving Sunday’s brisk start, the battle for the front of IRC Three, as the boats tackled the stiff beat down the Channel, as usual was down to picking the shifts and playing the tide. Sadly some British Sun Fast 3300s teams had not made it through - Kelvin Rawlings and Stuart Childerley (hoping to repeat their IRC Two-Handed victory from 2015) opted out of the race as James Harayda and Dee Caffari on Gentoo retired with a ripped mainsail. Another, Swell, sailed by double Olympic gold medallist Shirley Robertson and Volvo Ocean Race sailor Henry Bomby, was also having a hard time having been OCS, although they had managed to recover well from their premature start, overhauling Léon by the Needles. But then as Bomby recounted, they “got Portland Bill wrong - we were playing for a left shift, so our main rivals got four or five miles ahead of us in the first six hours. So we had to play catch up from there.” At 0600 on the first morning, the Sun Fast 3600 Fujitsu British Soldier skippered by Henry Foster, had nosed into the lead, hugging the shore at Start Point with Louis-Marie Dussere’s JPK 1080 Raging-bee², Philippe Girardin’s J/120 Hey Jude and Raging-bee² neck and neck for the lead to the south. The British Army remained out in front as they sniggled around the Lizard coastline and continued on in the lead – just - as they diving south of the Land's End TYSS and up its west side. At the Fastnet Rock on the early hours of Wednesday morning, it remained tight on the water, but the lower-rated Léon led over Raging-bee² and Hey Jude by 45 minutes with Fujitsu British Soldier 13 minutes further back. At this stage Swell was 1 hours 19 minutes behind under corrected time. Half way into the return journey to Bishop Rock Fujitsu British Soldier and Hey Jude stayed west as Raging-bee² had nosed ahead of Léon to the east. By being further east still, Swell gained by being able to lay the east side of the TSS west of the Scilly Isles, as the boats ahead lost out, having to gybe to avoid it. But the major hurdle ahead was the ridge that engulfed the fleet late on Wednesday into the early hours of Thursday, that parked the fleet. Here the Fujitsu British Soldier crew made the decision to head west of the TSS. This worked out badly for them and they remained more firmly stuck than the boats to the east. Hey Jude and Swell came out best in this reshuffle along with doublehanders Olivier Burgaud and Sylvain Pontu on their JPK 1080 Aileau just to their south.
19583
178
4
Load more...