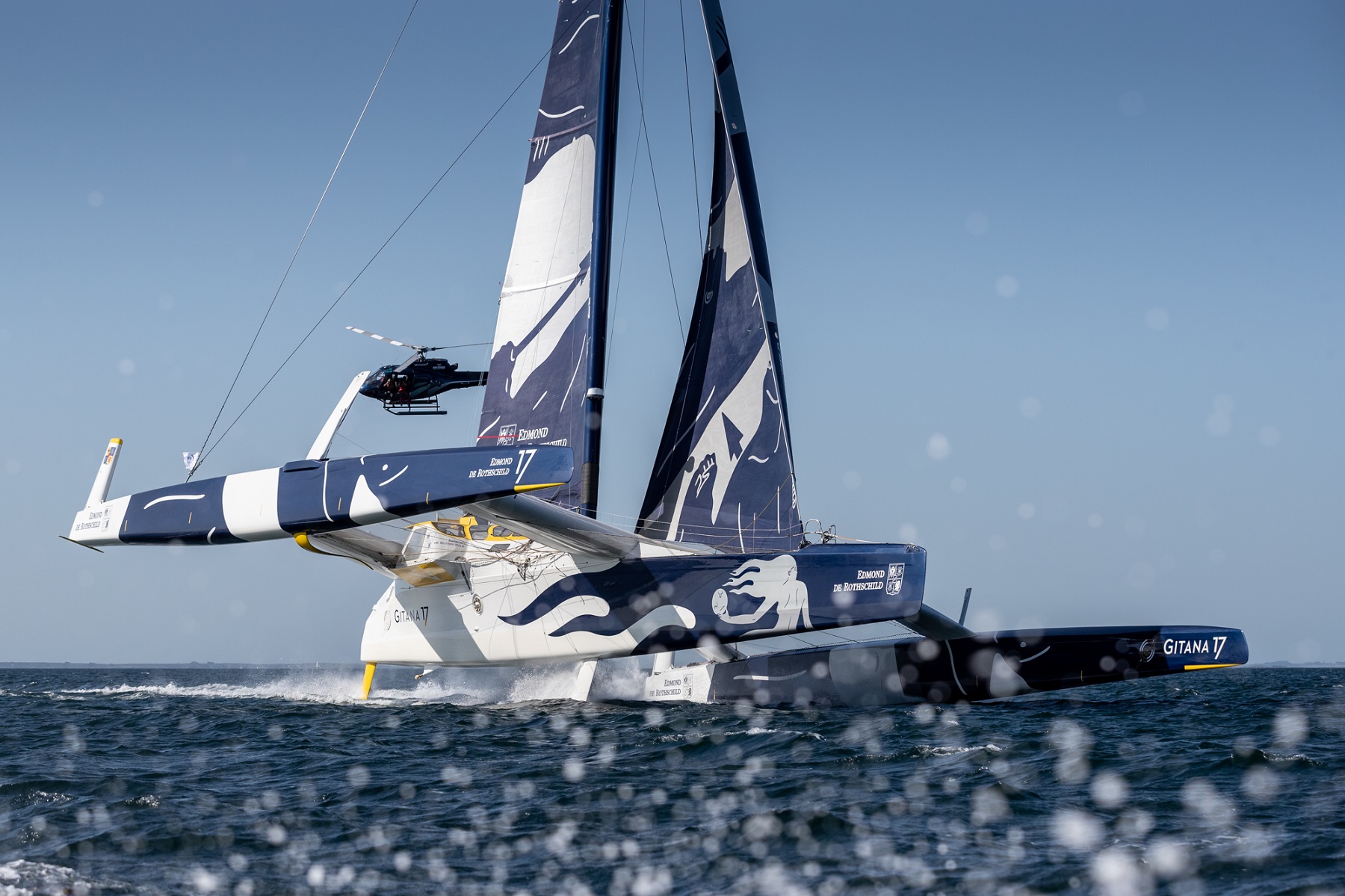 While the Vendée Globe grabbed headlines over the winter with a record fleet of 31 boats, France boasts a yet more extraordinary fleet of boats – the Ultimes. Developed over the last 30 years by teams attempting to break the non-stop round the world record, the Jules Verne Trophy, these giant 32m long by 23m wide flying multihulls are the fastest offshore racing yachts by far. In August several will be competing in the Rolex Fastnet Race. If adequately brisk conditions materialise, these craft are more than capable of finishing in less than a day, despite the new course to Cherbourg being longer at 695 nautical miles.

In 2019 as most competitors had still to reach Land’s End, a heavyweight bout was playing out in the final moments of the Ultime race between two titans – solo non-stop round the world record holder (and Vendée Globe winner) Francois Gabart, sailing with Jimmy Spithill on board MACIF and Maxi Edmond de Rothschild, co-skippered by Volvo Ocean Race winners Franck Cammas and Charles Caudrelier. MACIF led past the Lizard with her rival in hot pursuit, but by leaving their final gybe a little longer, Cammas and Caudrelier were able to sail a hotter angle into the finish and pipped their rival to the post, to win by a mere 58 seconds.

Both these boats will return to compete in the Rolex Fastnet Race’s Open Multihull class, only MACIF has been acquired by Team Actual, which finished fourth two years ago on their previous Ultime trimaran. At the end of April, the trimaran emerged from Team Actual shed in its new livery. From their base in La Trinité-sur-Mer, skipper Yves Le Blevec and his team are currently still getting acquainted with their new beast.  Comparing her performance with that of his previous Ultime, Le Blevec observes: “In light air it is similar and in big wind and big waves it is not much different, but in medium conditions the boat is between 10-15% faster.” 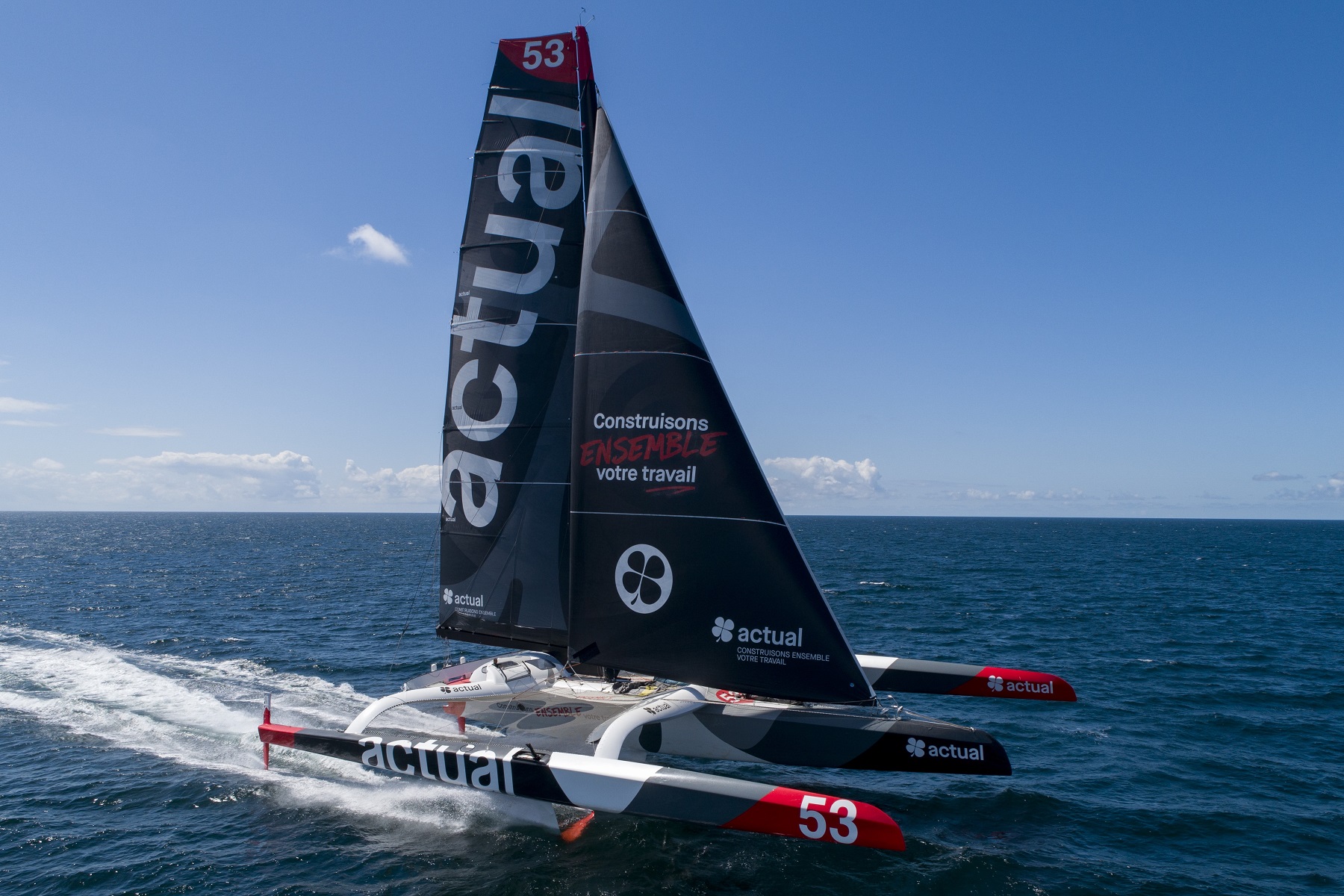 While foilers usually prefer flat water, Le Blevec maintains that it is in fact in wavy conditions where they are seeing their performance gain. “With the old boat we had big difficulties to go fast against the waves because the boat falls into the troughs. On the new boat with the foils, it stays up out of the water and doesn’t fall off into the waves, so they go faster.”

Le Blevec, who won the 2015 Rolex Fastnet Race’s IRC Canting Keel class with Nicolas Groleau’s Bretagne Telecom, says that for the Ultimes the change of course to Cherbourg won’t impact them greatly but he appreciates the improved logistics that the Cotentin port will offer. “Before it was very difficult for competitors to cross the line and then be told they couldn’t go into the harbour. In Cherbourg it will be simpler.” Le Blevec has fond memories of the city having spent several months there in the late 1990s building the maxi-catamaran Team Adventure.

As to the Rolex Fastnet Race, Le Blevec is a big fan. “It is like a monument - a very iconic race. Every sailor knows the Fastnet Race. It is a measurement for everyone in sailing. The start of the race is always a very special moment because there are a lot of different types of boats. We are the fastest but we can play with the Contessa 32s and there are all categories. It is very important for everybody.” 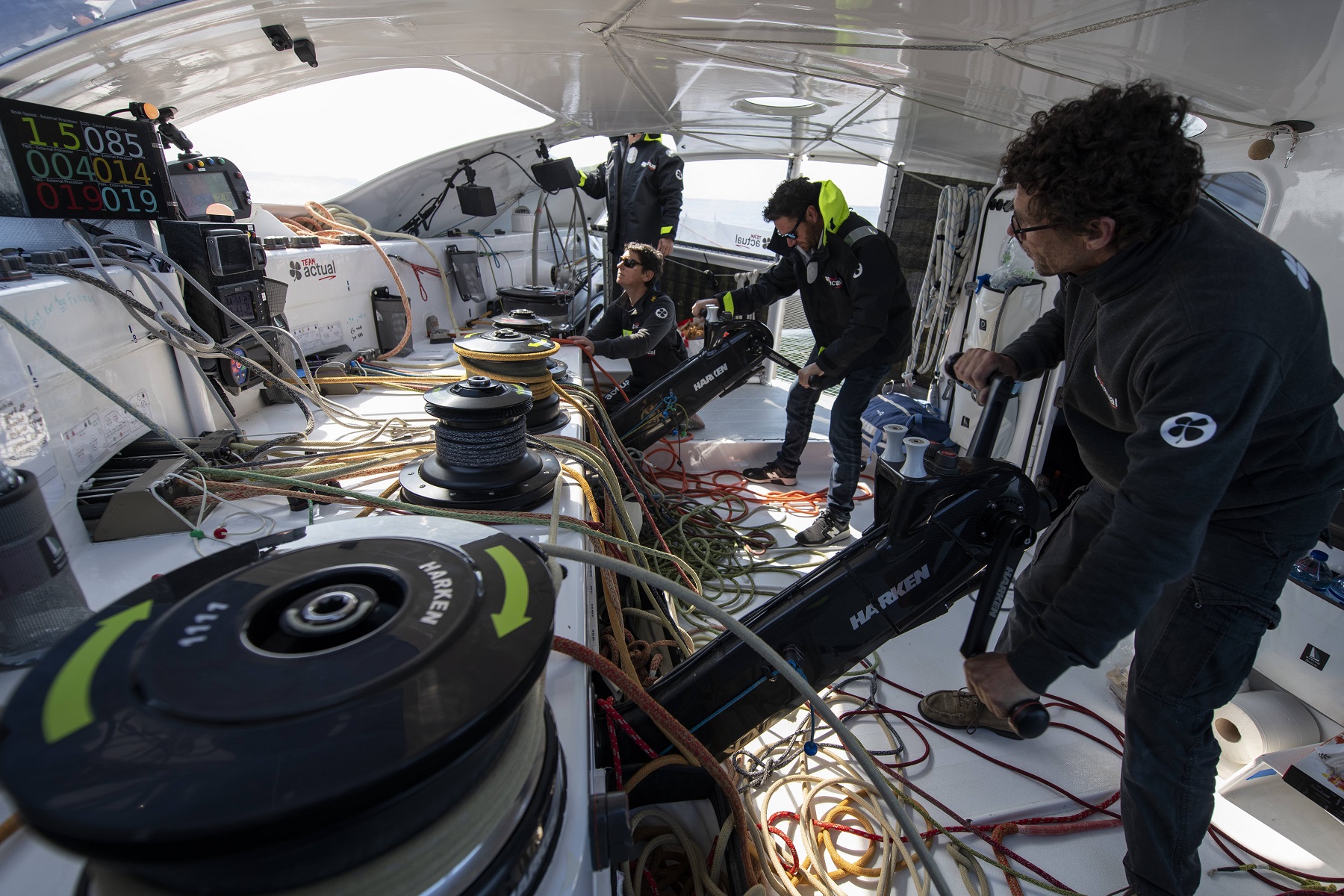 Yves Le Blevec and team on board Actual Ultim 3 will be one of the fastest boats in the 49th edition of the race © Ronan Gladu/ronangladu.com

Meanwhile Franck Cammas and Charles Caudrelier, who respectively skippered yachts to victory in the 2011-12 and 2017-18 editions of Volvo Ocean Race, return once again as co-skippers of Maxi Edmond de Rothschild to defend their title. Their strength is a highly experienced team and the amount of time they have spent developing and learning the intricacies of their Ultime.

“The focus is on the foils and the rudders, but also on the windage,” says Caudrelier. “The improvements we have made in the last two years have been huge. We need big appendages in order to fly early [typically in 14 knots of wind/28 knots boat speed], but then when you fly fast at 40-45 you have problems with cavitation – it’s complicated but we have spent hours and hours working on that and I think the result will be quite good.” In only a little more wind and Maxi Edmond de Rothschild is capable of cranking out 30-40 knot average speeds, the slower end of which would allow her to be comfortably berthed in Cherbourg within 24 hours of starting the Rolex Fastnet Race.

The biggest threat aside from Le Blevec’s Actual Leader, are the two new Ultimes launching this year. Freshly out of the shed, Armel le Cleac’h’s brand new Banque Populaire XI Ultime is currently entered in the Rolex Fastnet Race, but will only participate if it fits in their work-up schedule. Meanwhile, incredibly, considering these craft can cost upward of 10 million Euros, a second Ultime is due for launch in the next weeks for Francois Gabart. Gabart is currently looking to secure a sponsor for his new campaign but he is one of the most gifted of French sailors, already with a formidable CV for his 38 years.

To counter the threat of the new Ultimes, Maxi Edmond de Rothschild has a complete new foil package (ie three rudders with elevators, a centreboard fitted with a T foil and two lifting foils in the floats) being fitted for this season.

As to the new course Caudrelier takes it in his stride. Even the strong currents of the Alderney Race represent only a small fraction of an Ultime’s speed, while he points out that downwind in light conditions having counter current can increase apparent wind speed and resultant boat speed to overcome the current. Caudrelier is looking forward to the reception in Cherbourg: “Each time I have been there it was a nice finish. The people will be very happy to have an event like the Fastnet. Some people may not happy with the change of finish to Cherbourg, but I think after the first edition they will change their mind. If the bars are open it is a nice place to finish and, for sure, the food is better!” 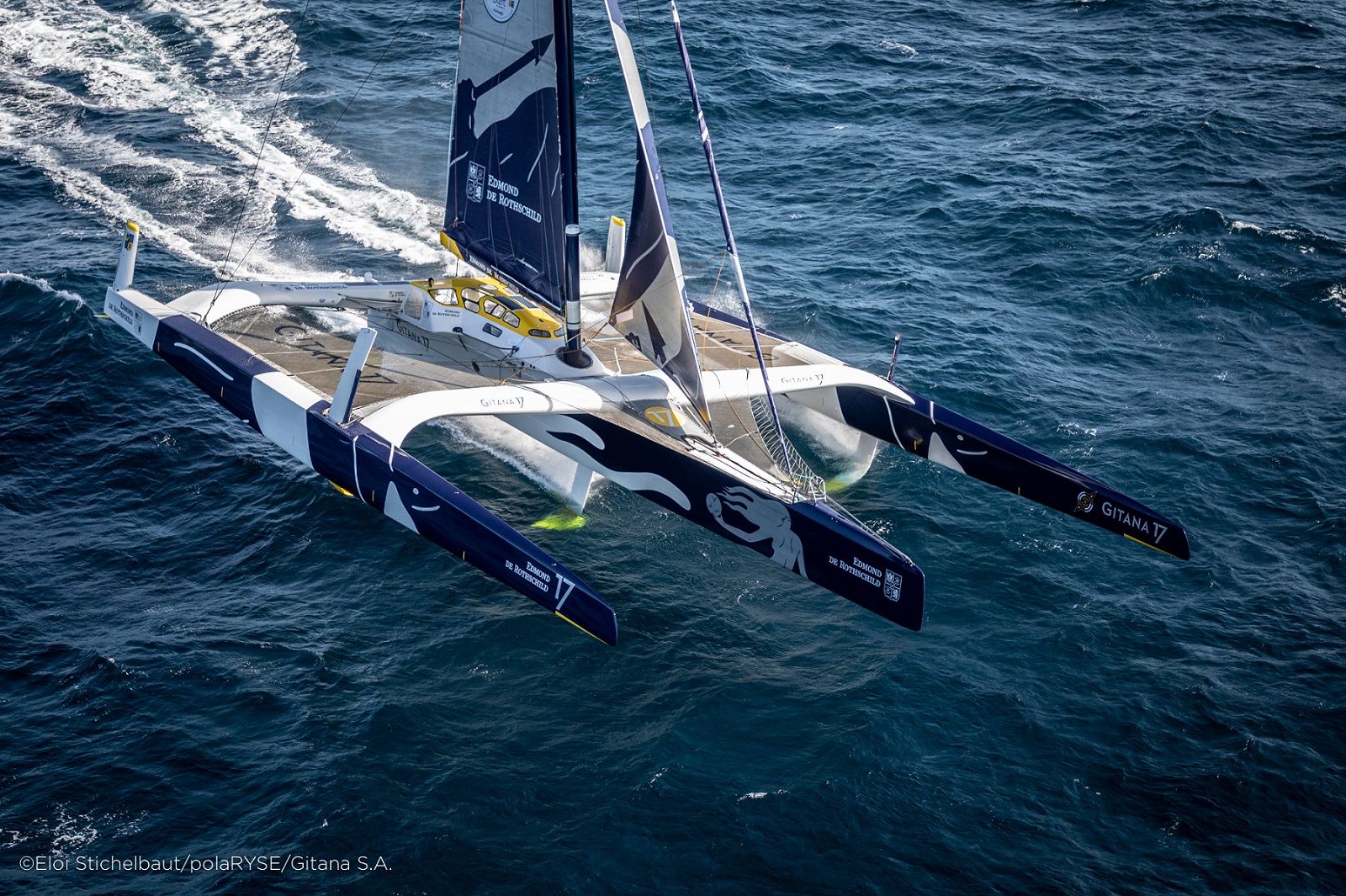 Team Gitana on Maxi Edmond de Rothschild saw an end of their Jules Verne Trophy record attempt earlier this year following damage to their rudder but are back to defend their multihull title in this August's Rolex Fastnet Race © Eloi Stichelbaut - polaRYSE / Gitana S.A.

Elsewhere in the Open Multihull class the sole British skipper entered is Sam Goodchild, who has this season taken charge of the Multi50 trimaran Leyton. However Leyton's participation in the Rolex Fastnet Race again depends upon the Multi50 calendar. The fifth entry is the 24m long Ultim'emotion 2, the ex-Prince de Bretagne which former skipper and Route du Rhum winner Lionel Lemonchois created by elongating the former Sodebo ORMA 60 trimaran.

Racing under their own handicap in the MOCRA class are a few other racing multihulls. At present this class is likely to be led on the water by American Jason Carroll’s MOD70 trimaran Argo. Whether Argo will be joined by any other MOD70s remains to be seen. “I’m very excited to be participating in my first Rolex Fastnet Race,” says Carroll, a two time Melges 32 World Champion who currently also campaigns a flying one design catamaran on the GC32 Racing Tour. “It’s an iconic race and the team and I are looking forward to taking it on. Our aspirations are to sail well against similar speed boats and hope for the right conditions for us to score well under MOCRA handicap. Obviously the elapsed time and new record must be left to the Ultime tris, but sailing the course to the maximum of our potential will certainly be a satisfying result.” 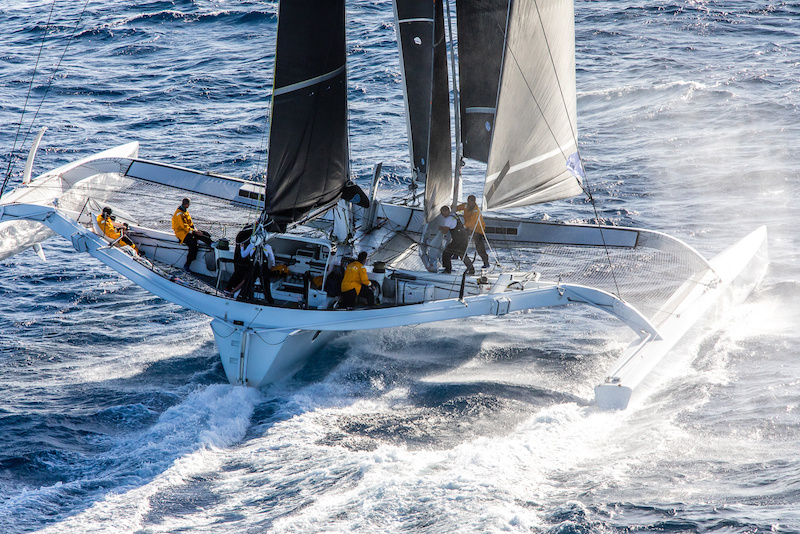