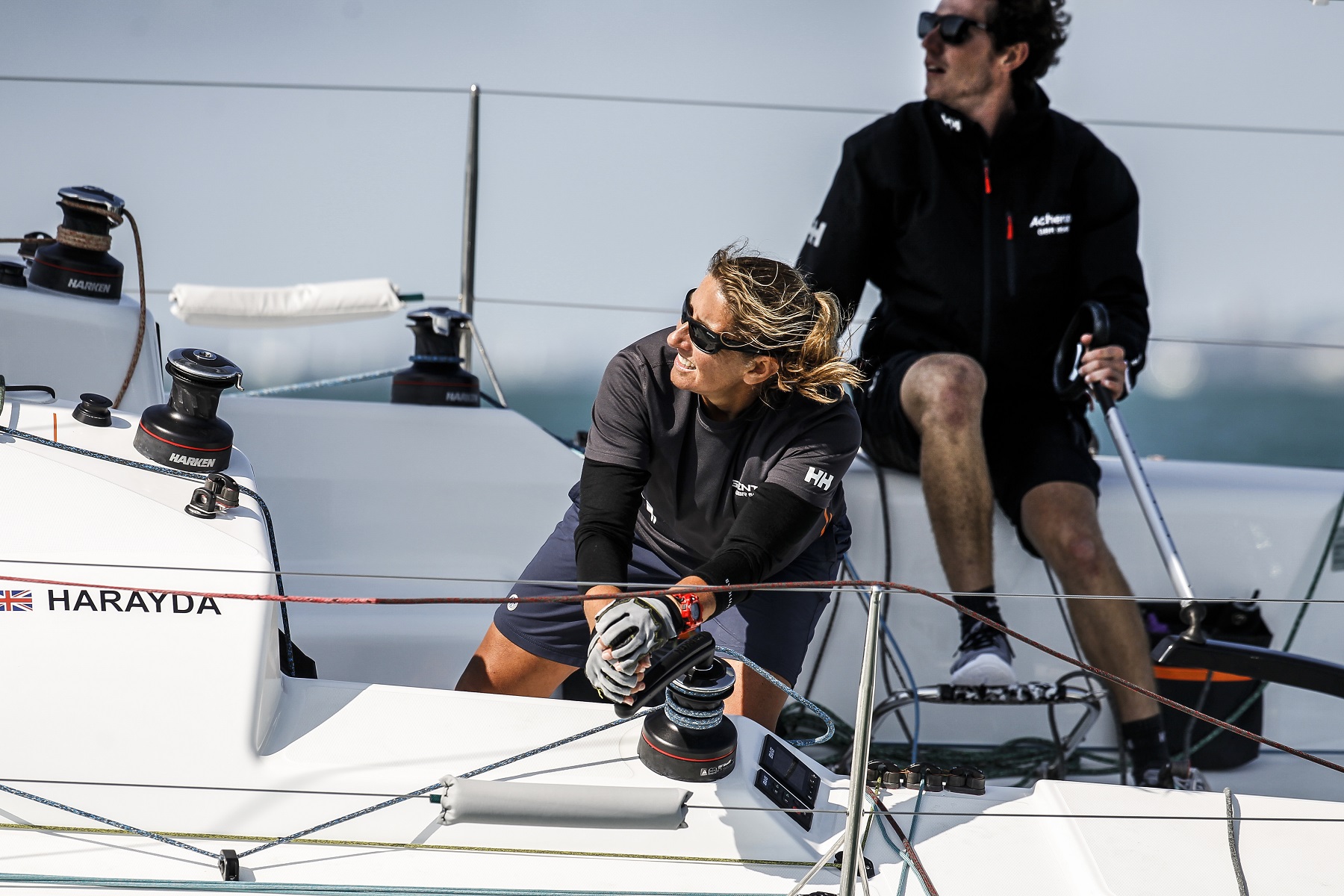 Competing in this year’s Rolex Fastnet Race are many of the world’s accomplished as well as highly competitive female sailors - such as Britain's Dee Caffari racing Two-Handed with James Harayda on Sunfast 3300 Gentoo © Paul Wyeth/pwpictures.com

In August a record fleet of 450 boats is expected to be on the start line of the world’s largest offshore yacht race, the Rolex Fastnet Race.

Among the 4,000 crews of this traditionally male-dominated sport, just over 10% will be women, according to present crew registration. While still a minority, this is nonetheless a strong sign of how female participation has grown in the Royal Ocean Racing Club’s premier event, since 1926 when Mrs T Aitken Dick became the race’s first female competitor aboard her 38ft 14 ton cutter Altair.

In fact in the intervening years female skippers have won the race (Catherine Chabaud aboard her IMOCA Whirlpool in 1999) and twice arrived first home (Dona Bertarelli, co-skipper of Spindrift2 in 2013 and 2015).

Competing in this year’s Rolex Fastnet Race are many of the world’s most accomplished female sailors, from Dee Caffari, the most capped female round the world sailor of all time and double Olympic gold medallist Shirley Robertson - both of whom are competing doublehanded. Many of the world’s top female offshore sailors are in the IMOCA class, such as Initiatives Coeur’s Sam Davies, who has competed in three Vendée Globes and skippered the all-women’s Team SCA entry in the 2014-15 Volvo Ocean Race; Swiss former Mini, Figaro and Volvo Ocean Race sailor Justine Mettraux racing with Simon Fisher on 11th Hour Racing or Franco-German former Mini and Vendée Globe skipper Isabelle Joschke, in charge of MACSF. 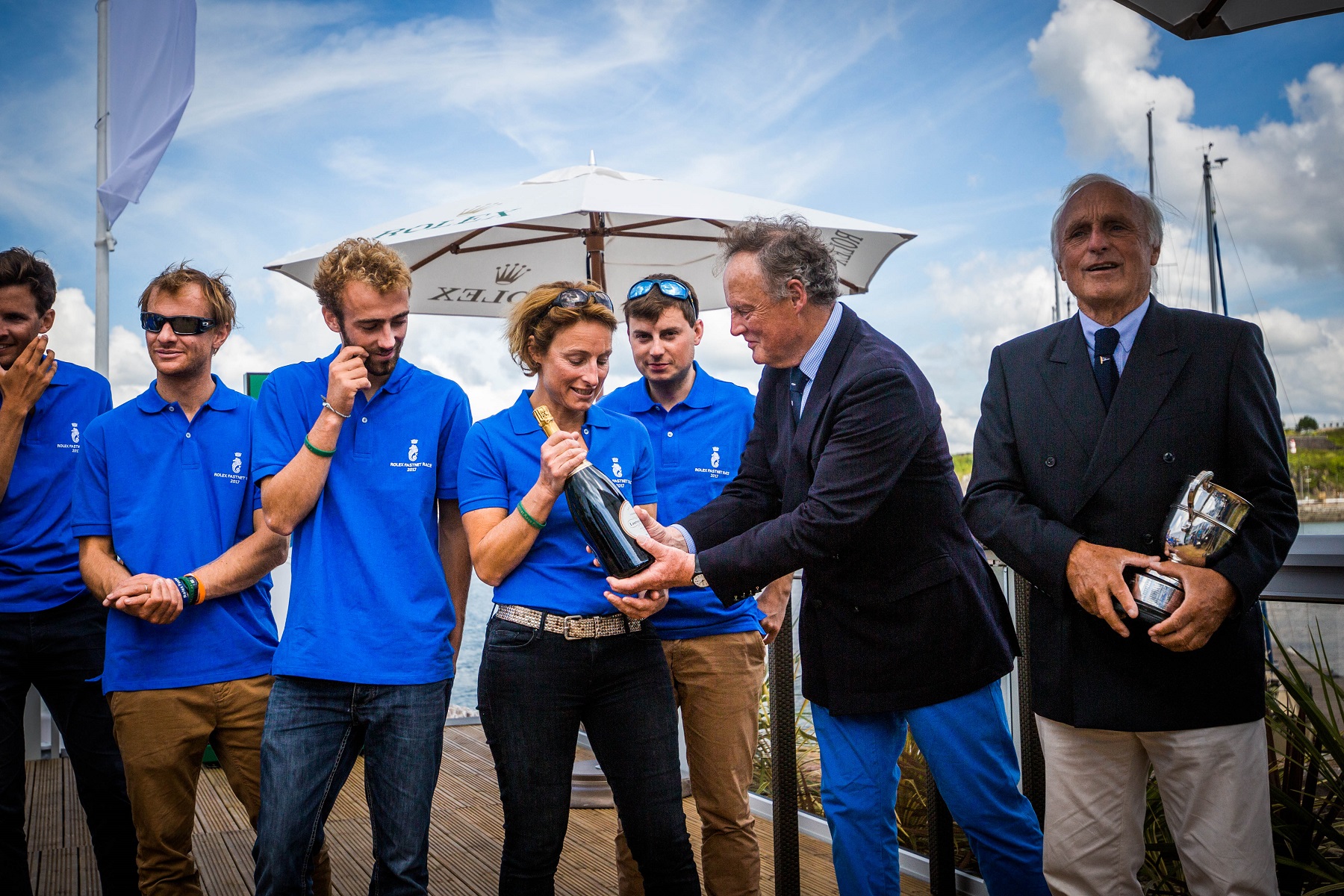 As a teenager, Corinne Migraine remembers being allowed to race inshore but being excluded from offshores – even on her father’s boat! Today this position has changed: Migraine co-owns the J/133 Pintia with her father, Gilles Fournier which they raced together to IRC Two victory in the 2017 Rolex Fastnet Race and this year won their class in the RORC’s Myth of Malham Race. Currently Migraine is a VP of the French sailing federation, the FFV, and Vice-Chair of World Sailing’s Oceanic and Offshore Committee while another woman, Anne Bagneaux-Savatier was recently elected President of the RORC’s sister club in France, the Union Nationale pour la Course au Large (UNCL).

While she is in the fortunate position of having her own boat, Migraine believes the situation for women is improving. “My feeling is that in any boat now it is not a problem to have women on board, which it was in the past.” Personally she very much enjoys recruiting young crew from her local yacht club in Le Havre and having women racing on board Pintia. For the Rolex Fastnet Race in addition to her two sons Victor and Ulysse, two more of their seven crew will be female, including Le Havre-based Figaro sailor Sophie Faguet and London-based Dutchwoman Yoyo Schepers whose adventures have included walking to both the North and the South Poles.

“It is the first time we have had so many girls on board, but it is really good,” continues Migraine. “It makes quite a lot of difference to the atmosphere on board. It helps a lot to make the crew more efficient - maybe the boys try to make the best of themselves, while we are there. Sophie will be the most competent person on board because she is a pro-sailor who hasn’t stopped sailing during the pandemic. It doesn’t make much difference on board, being a girl or not.” 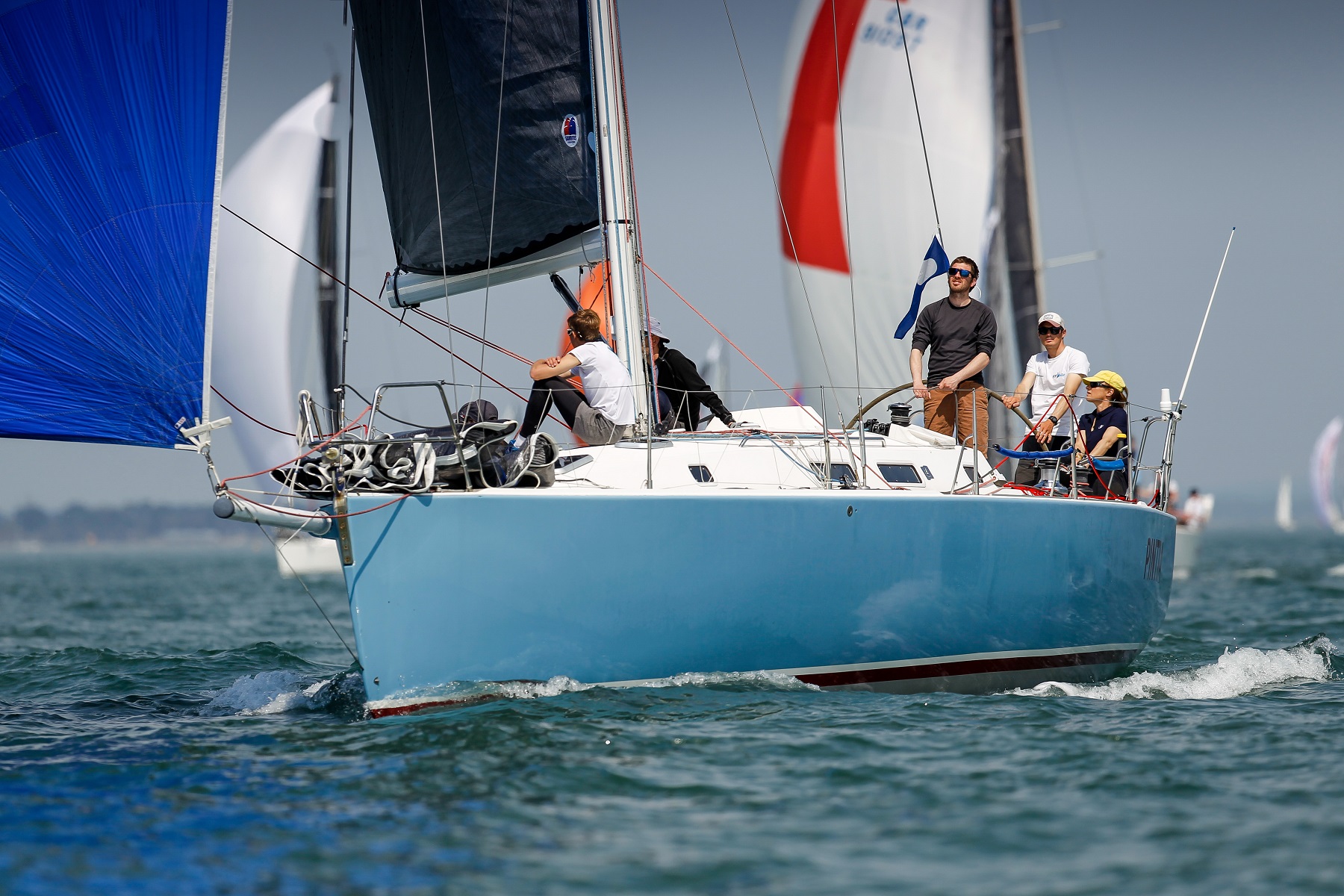 One of the keenest campaigners for women’s sailing in the UK has been Susan Glenny whose five previous Rolex Fastnet Races have included two with an all-female crew. However back with her First 40 Olympia's Tigress, this year Glenny is sailing with a mixed crew.

Interestingly, in this year’s Rolex Fastnet Race there are at present no all-female crews entered. Is this a forward or a backward step? “I think to move forward mixed gender racing is the way,” says Glenny – at present delivering Olympia's Tigress back to the UK from Marseille. “There is a place for all-women’s racing, and I have done both, but I feel that women progress better when they sail with a mixed crew, because it is real life. I will race with all-women crew again but my primary focus is now on getting crews to race competitively together.” 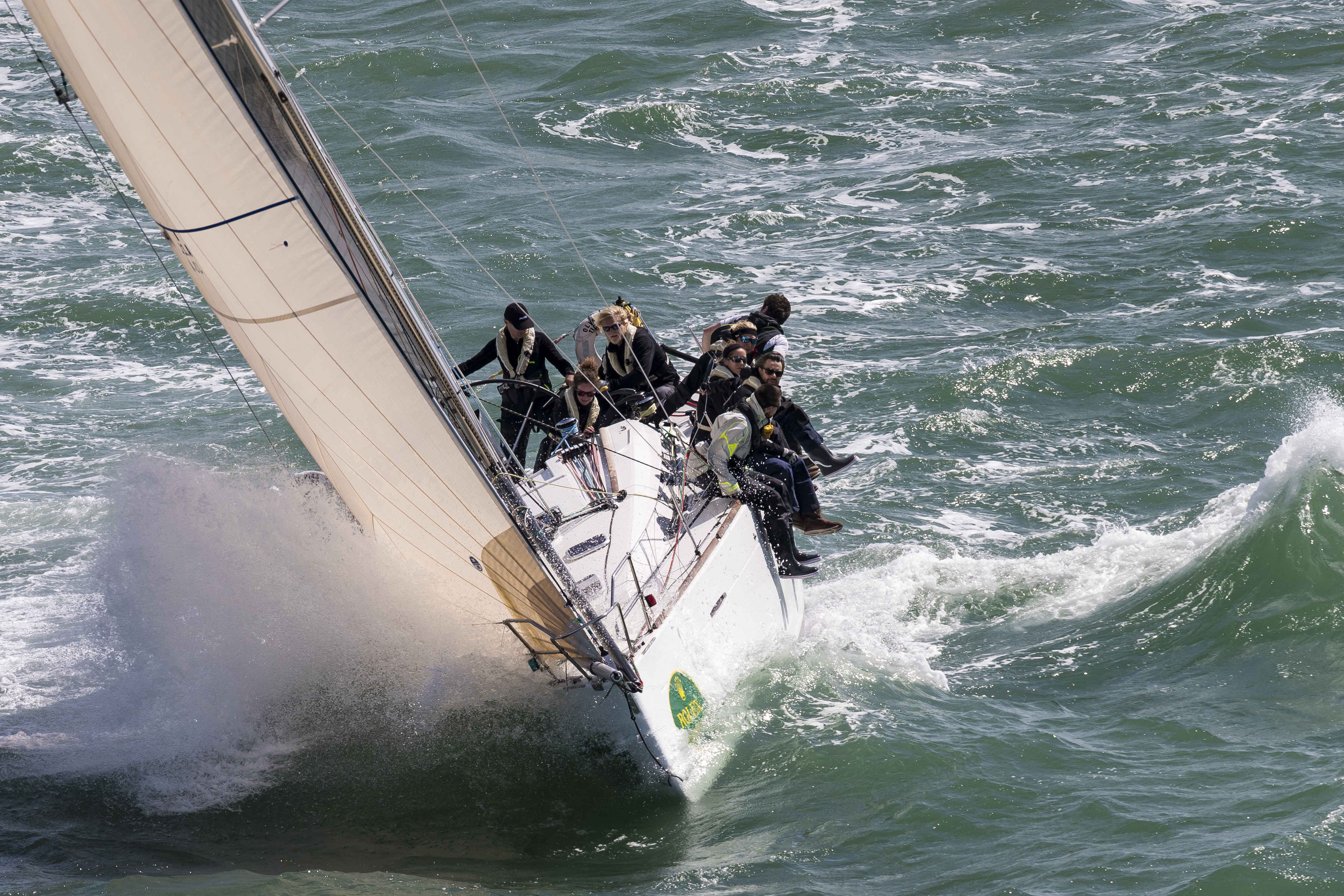 Five previous Rolex Fastnet Races for Susan Glenny - a keen campaigner for women’s sailing in the UK. Competing again - this time with a mixed crew - on her First 40 Olympia's Tigress © Carlo Borlenghi/ROLEX

Olympia's Tigress is one of many ‘pay to play’ racing boats entered in the Rolex Fastnet Race. Typically 60% of her crew are paying guests with experience ranging from accomplished race boat owners from overseas down to those with newly acquired RYA Competent Crew certificate. The other 40% are young up-and-coming sailors, for example from the British Keelboat Academy. Glenny’s Rolex Fastnet Race crew will include three other women, although she reckons the 10 to 1, male to female ratio more generally, is accurate. “Of the ladies who start and come into offshore sailing – a lot do come through us, but equally we like the guys to come too. There are a number of very progressive men in the industry today but there are still a number of ‘unprogressed’ – it will change, but Rome wasn’t built in a day.”

Perhaps most encouraging is the younger generation, for whom the gender issue is becoming less of an issue. This is thanks perhaps to the advent of mixed crews in the Olympics and The Ocean Race and incentives by many yacht clubs, including the RORC, to encourage more owners to take youth and female crew.

One of the most impressive crew training initiatives is that of the Hamburger Verein Seefahrt in Germany whose club owns three race boats. For 25-year-old architecture student Katrina Westphal, this will be her third Rolex Fastnet Race and her second as skipper. “Our club is super special, because there are not that many clubs which support offshore sailing for normal sailors and young people. We have three clubs boats and, if you are a ‘skipper’, you can sail these boats as if they were your own. So I made the application in November to find my crew and they are all members of the club.”

Significantly the HVS’s trio are not ‘average white boats’ but full-on racers. In 2019 Westphal skippered the HVS’s JV52 Haspa Hamburg. This year she is taking a further step up: Latest addition to her club’s fleet is a fully tricked-up carbon fibre grand prix racer, the Carkeek 47 Störtebeker (previously Stefan Jentzsch’s Black Pearl). Outside of the IMOCA Störtebeker this will be the largest grand prix race boat to be skippered by a woman in this year’s race.

To date, due to the pandemic, the Störtebeker crew have only managed to get in one race aboard their new weapon and it could be that the Rolex Fastnet Race will be their first major competition. Of Störtebeker Westphal says: “Compared to the other boats everything is so easy, doing manoeuvres, etc and everything is light. That makes it super fun. The other boats are more like performance cruisers and they have a real galley and a table. On this boat we have nothing - it is just black on the inside with bunks you pull down and a Jet Boil. Everything is special and perfect for racing – although maybe a bit more for inshore racing than offshore, but it has all the specifications for offshore.” Westphal is expecting a wet ride with plenty of holes in the deck through which lines are funneled aft and the deck is flat, so waves can roll straight back to the cockpit.

Typically on the club boats around one third of the crew are women but on their Andrews 56 Broader View Hamburg, around half are in this year’s race.  On Störtebeker the crew includes two other women, 23-year-old Josefin Brand and Cosima Cramer, who aged 19 is fresh out of school. Save one, all are young, aged 18-27, the elder coming with formidable experience for their years. In addition to her Rolex Fastnet Races, Westphal has raced with the HVS from the Azores to Hamburg and in the 2017 RORC Transatlantic Race, plus lots of domestic events in the Baltic. For her 27-year-old navigator, this will be his seventh Rolex Fastnet Race.

Cecilia Wollmann, 23, is an example of how sailing is perhaps becoming more ‘gender invisible’ for the younger generation. Just concluding her economics degree at the University of Southampton, she represented her native Bermuda in the Laser Radial at Rio 2016 and was attempting a mixed Nacra 17 foiling catamaran campaign for Tokyo this year with her younger brother, until they were unable to qualify. “It was difficult,” she admits. “We were doing school at the same, so we were not able to do all of the events.” 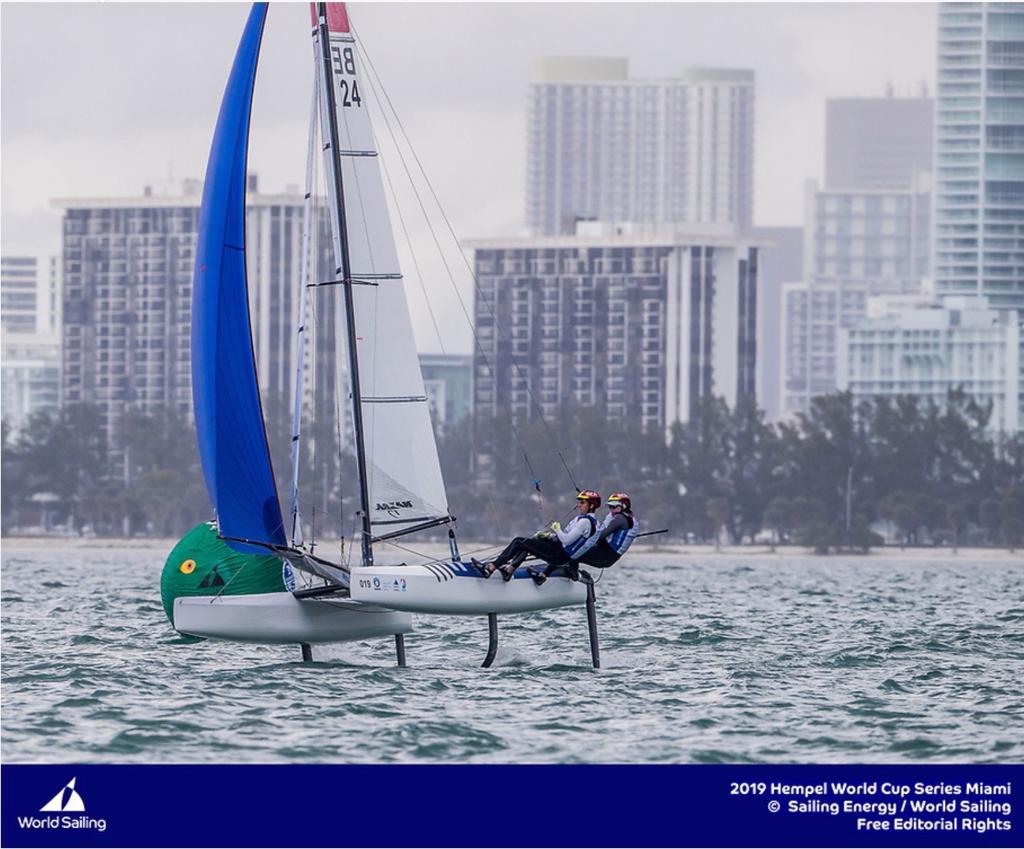 Cecilia Wollmann, 23 - seen here racing a Nacra 17 - is an example of how sailing is perhaps becoming more ‘gender invisible’ for the younger generation © Sailing Energy/World Sailing

Her father Paul, who typically races the family J/70 in Bermuda, had intended on participating in the Marion-Bermuda Race until it was cancelled, so the Rolex Fastnet Race was a fine alternative. For this they have chartered via LV Yachting the comfortable but speedy French 50ft TS5 catamaran, Addictive Sailing, on which experienced Class40 sailor Brieuc Maisonneuve will be skipper. This is the larger version of Christian Guyader’s TS42 Guyader Gastronomie which won the MOCRA multihull class in 2019.

“My dad [who is ‘into cats’ at the moment] really wanted to do an offshore event with the family,” continues Cecilia. “So we were looking at different offshore races and then, with COVID, this seemed like the best - It is such a big event and so well known. My sister went to school in Southampton as well so we have ties in the area.” So on board will be her father plus elder sister Ellie and younger brother Mike.

Despite her strong dinghy sailing credentials, this will be not only Cecilia’s first Rolex Fastnet Race but also her first offshore race generally. “That will be exciting. I am a bit worried about sailing in the dark. We have a captain on board, since none of us are that offshore experienced, especially the kids on board and we are doing a bunch of training beforehand on board out of Hamble. I am excited.”