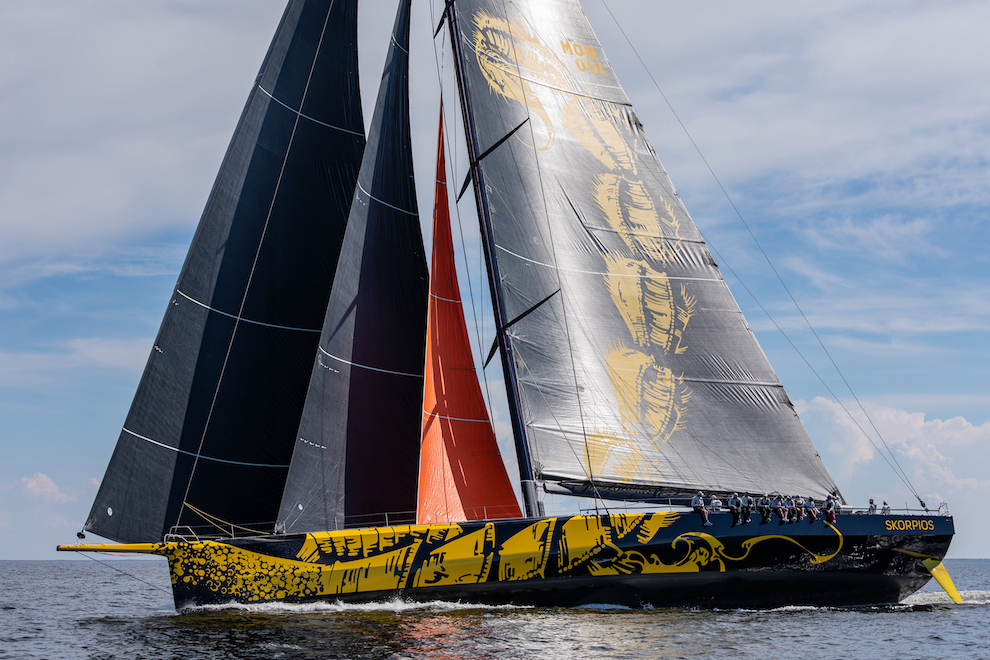 A major clash of the titans will take place between two of the world’s fastest maxi-monohulls at August’s Rolex Fastnet Race.

While the most sought-after victory is, of course, the overall win under IRC, for the monohull that is first home into Cherbourg there is also plenty at stake. The kudos and personal satisfaction that come with winning on the water are as significant as the more tangible rewards: the Erroll Bruce Cup and, since the Swiss watchmaker partnered the race some twenty years ago, a Rolex chronometer.

Part of this kudos is that alongside the race’s overall winner, the monohull line honours winner is also remembered in the history books. These date back to the first Ocean Race (as it was originally called) in 1925, won by the Le Havre pilot cutter Jolie Brise campaigned by the future first Commodore of the Ocean Racing Club (as it was known until 1931), Commander EG Martin.

Since thensome of the world’s largest and most magnificent racing yachts have claimed line honours.

Isaac Bell's Camper & Nicholson 63 footer Bloodhound was first home in both 1937 and in 1953 (before being bought by Prince Philip). The 1960s to the end of the 1980s was the eraof the mighty IOR maxis such as Edmond de Rothschild's Gitana IV (1965), Ted Turner's American Eagle (1971), Marvin Green's Nirvana (1985) while, spectacularly, Bob Bell's Condor won line honours in three consecutive races over 1979-1983.This period appropriately was rounded off by the late Sir Peter Blake’s ketch Steinlager 2 (1989) arriving home first immediately prior to her exceptional Whitbread Round the World Race victory. 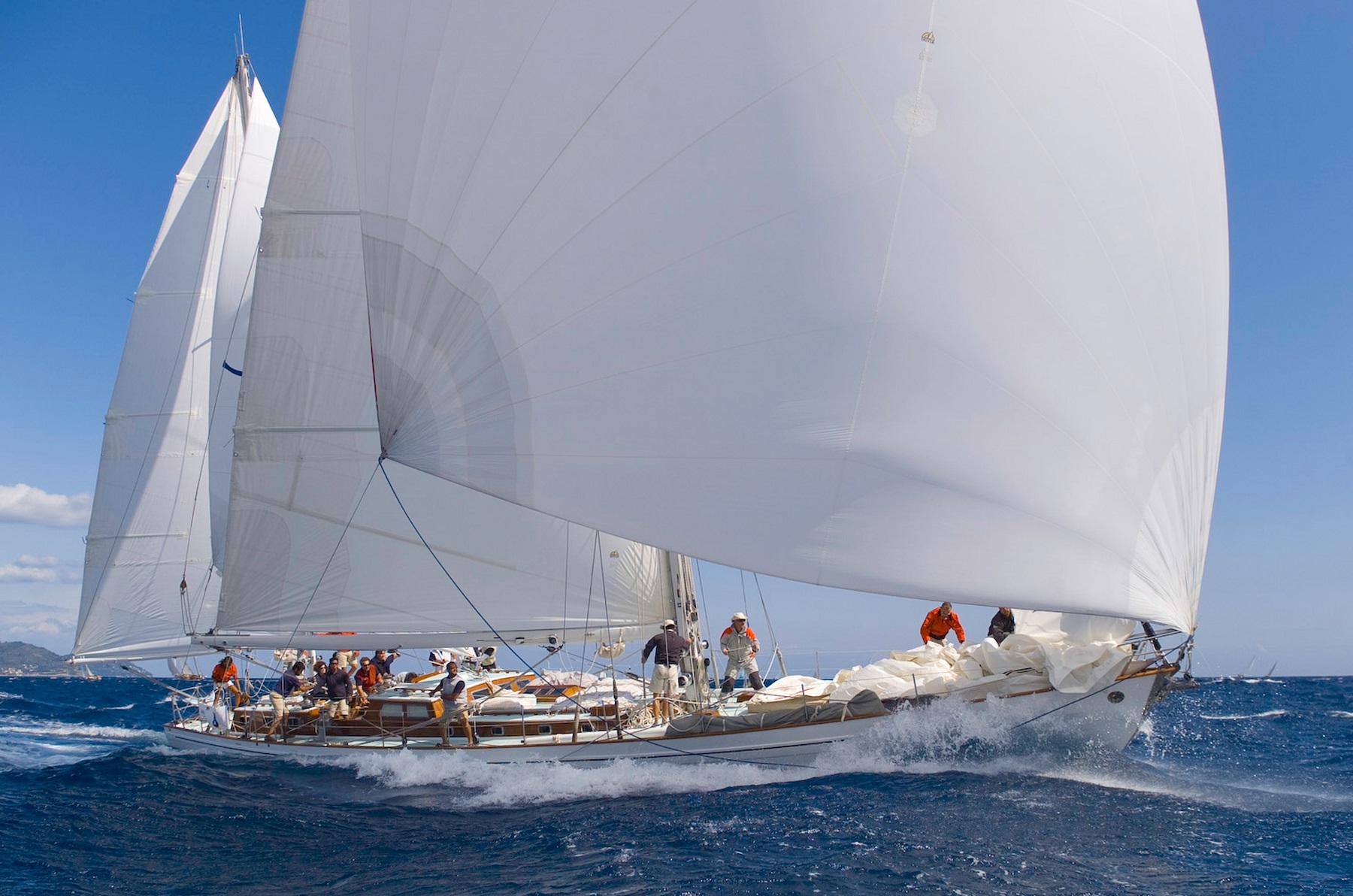 One of the most famous line honours winners will be back on the start line this year is the 74ft Stormvogel. She will be celebrating the 60th anniversary of when her original Dutch owner, Cornelius Bruynzeel claimed Fastnet Race line honours in 1961. (Read more about her here).

This century it has been the turn of the 100ft maxis such as Neville Crichton's Alfa Romeo 1 (2001), Mike Slade's ICAP Leopard 3 (2007 and 2009), plus the very latest iteration - the VPLP 100 Comanche. Exceptions have been the Ian Walker-skippered VO70 Abu Dhabi Ocean Racing which romped round the course in record time in 2011 and defending champion, George David's Juan K-designed Rambler 88, the line honours winner in 2017 and 2019. 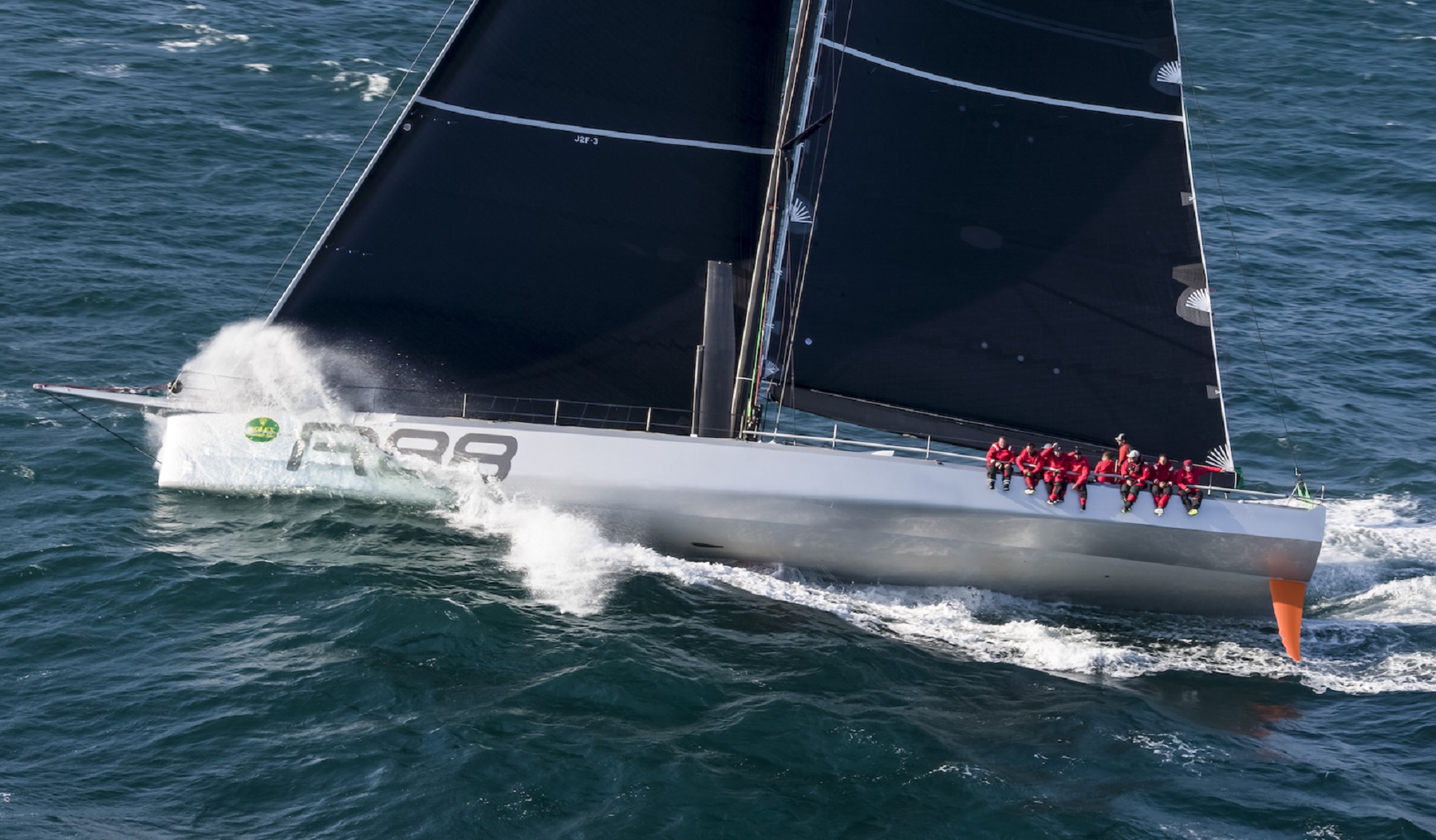 Rambler 88 is currently on a ship bound for the UK and returns to the Rolex Fastnet Race attempting to make it a hat-trick. In fact her American owner George David would ideally make it another kind of triple – overall line and handicap honours plus a race record, something which he achieved in the 2007 Rolex Middle Sea Race. To date he has only achieved one of these in the Rolex Fastnet Race. “We have never won - the closest being second in IRC overall in the 2007 race,” says David.“We have had shots at records, twice. In 2011 we were leading the fleet at the Rock and well ahead of Abu Dhabi who set the record that year – until Rambler’s keel fractured and the boat capsized just after rounding the Rock.  Then in 2019 we broke our own record for first to the Rock by 88 minutes but the breeze on the return veered after Land’s End and we ended essentially downwind to Plymouth.” 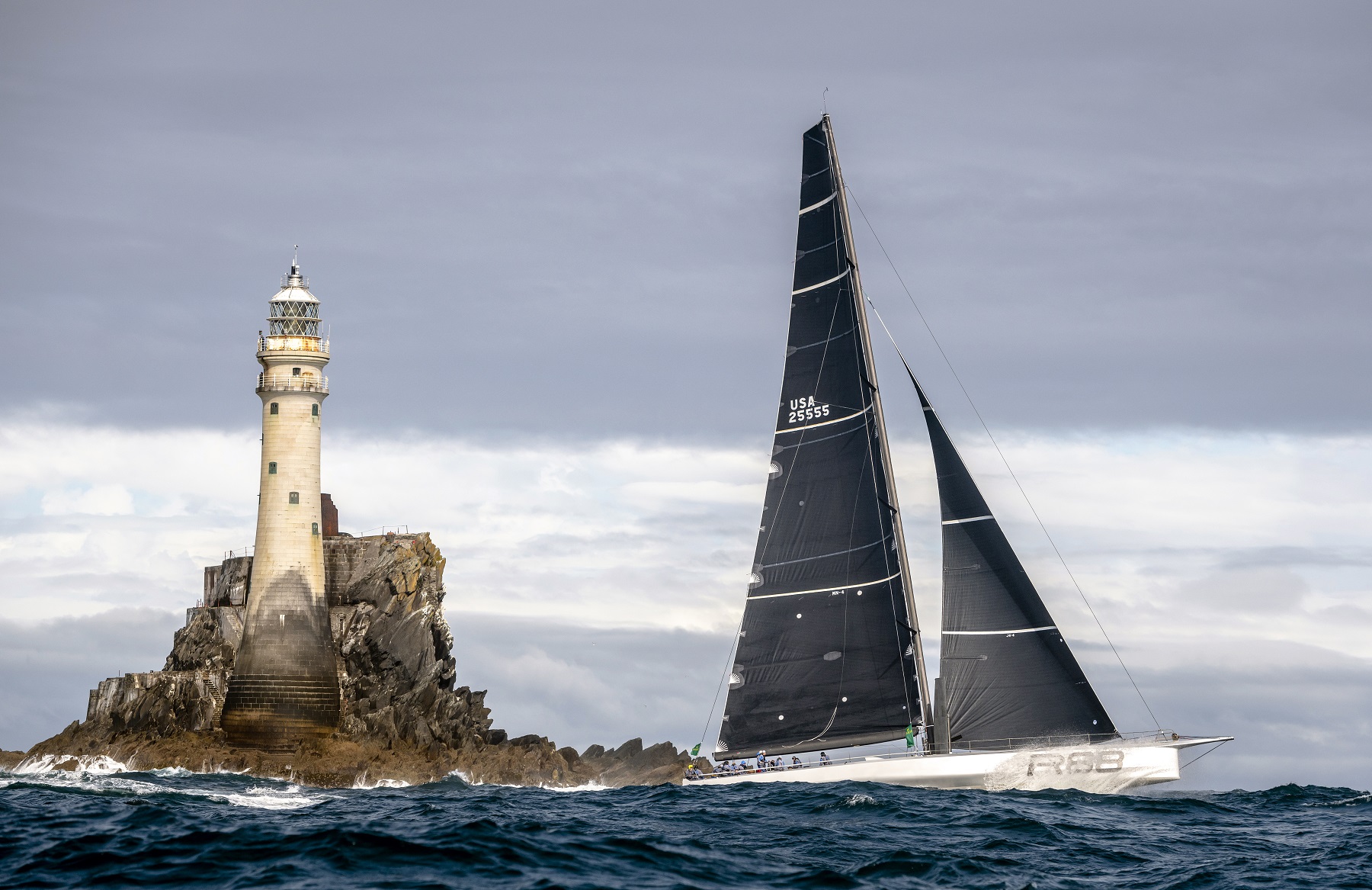 In a terrifying episode, Rambler 100’s capsize in the 2011 race saw David, his future wife Wendy Touton and three others in the water drifting away from their upturned hull as dusk was settling. Fortunately all 21 crew were picked up safe and sound by the Irish Coastguard.

Rambler 88’s crew in 2021 will be the same as in previous years, led by Brad Butterworth and with a legion of other America’s Cup and Volvo Ocean Race legends.

“It’s a tough race even in a line honours boat,” David continues. “I admire the hundreds of weekend sailors in 35-45ft boats who come out for this race every second year. And some take a week to finish.”

David’s ambition to at least score his third line honours title has a major threat this year with a brand new supermaxi, some 37ft longer than Rambler 88, entered.

Dmitry Rybolovlev’s Skorpios is the first example of a ClubSwan 125, designed by Juan Kouyoumdjian and built by Nautor’s Swan in Finland. Recently launched, Skorpios at 42.6m long including her bowsprit, will overtake Nilaya as the biggest monohull ever to enter the Rolex Fastnet Race, since the 100ft maximum length limit was eased by the Royal Ocean Racing Club in 2017.

While very long, Skorpios is in other ways not overly extreme. With a beam of 8.75m for example she doesn’t have the huge beam to length ratio of Comanche. Skorpios’ skipper, Fernando Echavarri, the Spanish Olympic Tornado gold medallist and former Volvo Ocean Race skipper, describes her as being closer in this respect to the notably slender Reichel-Pugh designed Alfa Romeo.

Other than her size, most extreme about the ClubSwan 125 is her appendage package. While the number of her foils is the same as Rambler 88 or a VO70 with twin rudders, a canting keel (albeit with a draft of 7.6m) and two foils, the latter foils are C-shaped, conceptually similar to those of the ClubSwan 36. These foils do not make the ClubSwan 125 a flying machine - their role is to prevent leeway, maintain righting moment and to reduce displacement. The foils don’t provide as much lift, but are less draggy than the foils fitting to the latest generation IMOCAs, says Echavarri. Also helping her righting moment and fore and aft trim are her aft and mid ballast tanks capable of loading on seven and eight tonnes of water respectively.

Whether Skorpios is the fastest monohull ever launched, as her vital statistics suggest she may be (such as her displacement of 58.8 tonnes of which 23.2 are in the fin and bulb, and downwind sail area of 1961 sqm), remains to be seen. “That is a hard one because we are facing things we have never faced before, like understanding how the wind works at very high altitudes [due to the extreme mast height]. This is something that is making us try and understand the potential of the boat.” Performance-wise, the yacht should regularly exceed 30 knots and upwind is as fast as the wind up to 14 knots. “The numbers are pretty promising.” 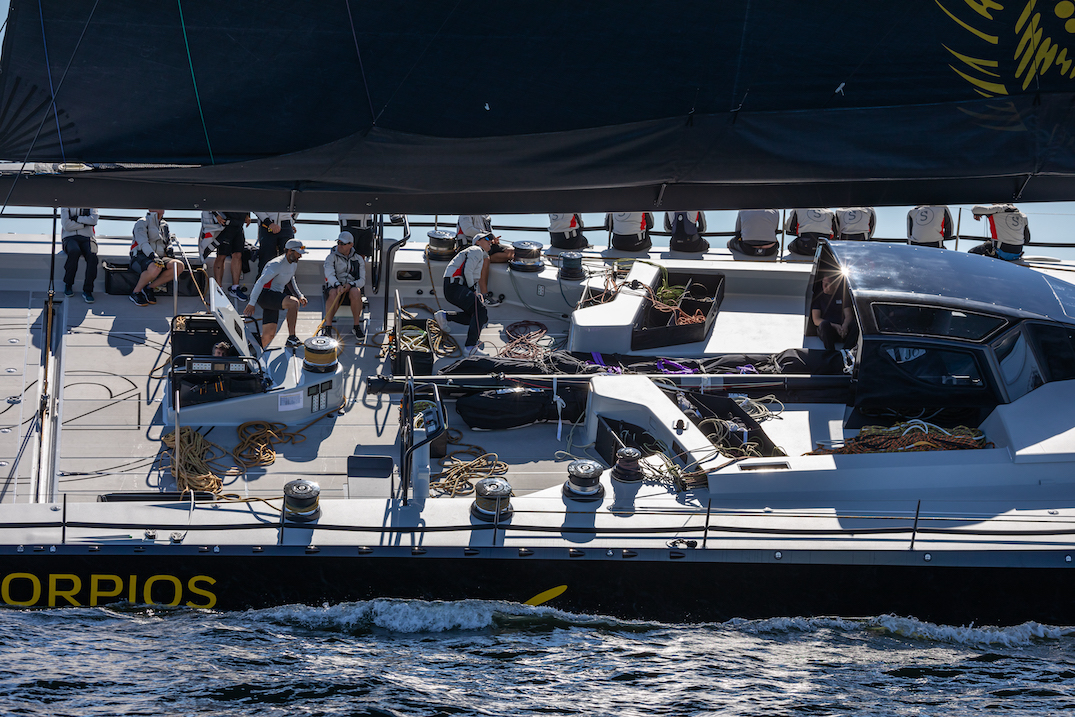 Inevitably on a boat of this size, all sail controls are push-button. “The power you need to move everything is huge,” says Echavarri. And yet, Skorpios will still require a crew of 23-24 to move big gear like sails around.

Perhaps most exceptional is that Nautor’s Swan in Finland, plus Echavarri and his team and all the suppliers were able to get this extraordinary boat created despite daily problems and delays thrown up thanks to the global pandemic. “There were issues every day but there were no excuses – we were going to make it happen. It was like an America’s Cup or the Volvo spirit,” states Echavarri.

Skorpios is due to arrive in the UK for training from mid-July. The Rolex Fastnet Race will be her first competitive outing.

Whether she or Rambler 88 score the elusive double (line and overall corrected time honours) or triple remain to be seen. The last boat to achieve the former was Ludde Ingvall’s Nicorette in 1995.