Diversity in IRC Three for the Rolex Fastnet Race 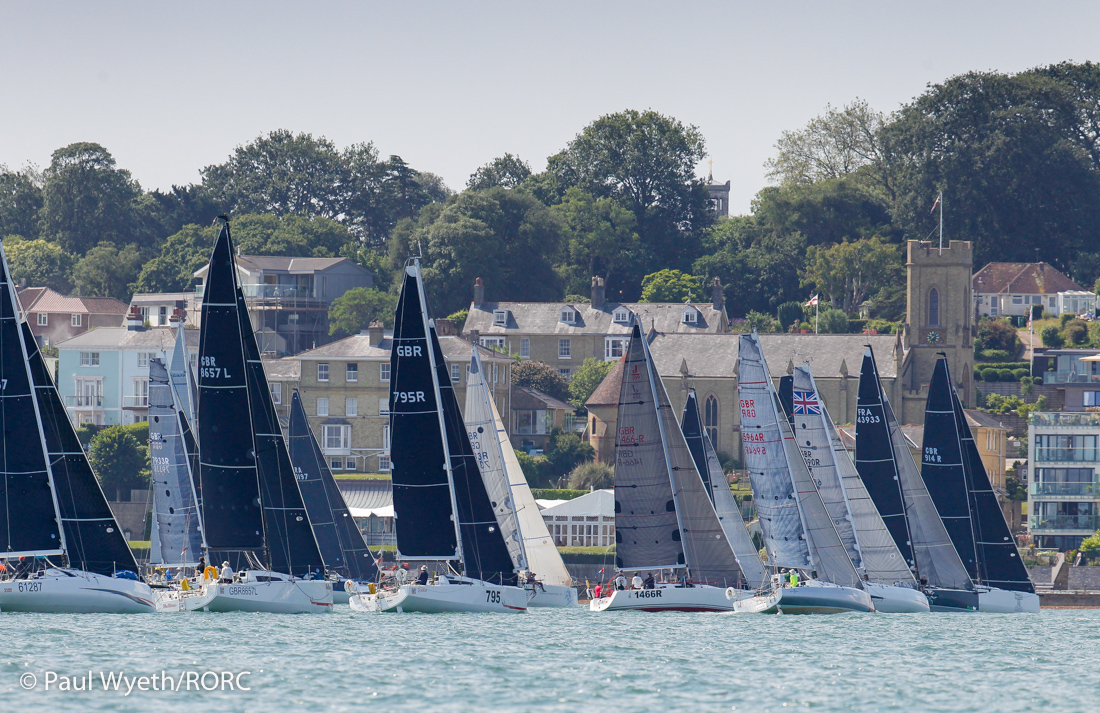 The largest class to compete in this year's Rolex Fastnet Race will be the 80+ boats in IRC Three © Paul Wyeth/pwpictures.com

With less than a month before the start of the 2021 Rolex Fastnet Race, IRC Three boasts the largest class competing with 88 teams entered from at least 10 different countries. IRC Three has a cornucopia of boat designs, mainly raced by amateur crews. However, amongst these Corinthian sailors is a rich vein of world class professionals, especially racing in the Two-Handed discipline. In recent editions, IRC Three has produced two overall winners of the Rolex Fastnet Race - Pascal and Alexis Loison racing Two-Handed with Night and Day (2013) and Gery Trentesaux’s fully-crewed Courrier Du Leon (2015).

Two-Handed Warriors
The vast majority of the 2021 Rolex Fastnet Race’s IRC Two-Handed teams will be racing in IRC Three. The doublehanded discipline has become hugely popular, almost doubling in the number of entries over the last decade. The 49th edition is set to eclipse the 64 entries in the 2019 race.

2013 was a golden edition for the father and son duo, Pascal and Alexis Loison, racing JPK 1010 Night and Day to overall victory. Alexis Loison’s success continued in 2019 with JPK 1030 Léon. Racing with the boat’s builder Jean Pierre Kelbert, Léon was the winner of IRC Three and IRC Two-Handed. Léon was leading the Two-Handed Class by 17 minutes at the Fastnet Rock but won the class by nearly five hours by the finish. “After the Rock we had strong reaching conditions with big seas,” recalls Alexis Loison. “With the A5 spinnaker up we were surfing at 19 knots and by the time we reached the Scilly Isles we were with IRC One!”

For the 2021 edition, Alexis will race Léon with a rising star. Guillaume Pirouelle has excelled in the 470 Class, won the Tour de France à la voile and has been selected to skipper Region Normandie in the Figaro Class. Should the pair taste success in this year’s race, the two Normans will undoubtedly receive a hero’s welcome in Alexis’ home port of Cherbourg.

“We don’t think about the finish; all of our effort is put into preparing Léon for the race,” continued Alex. “The competition in the Two-Handed Class is very strong from the British Sun Fast teams and like Léon, they will be very fast in strong reaching conditions.” 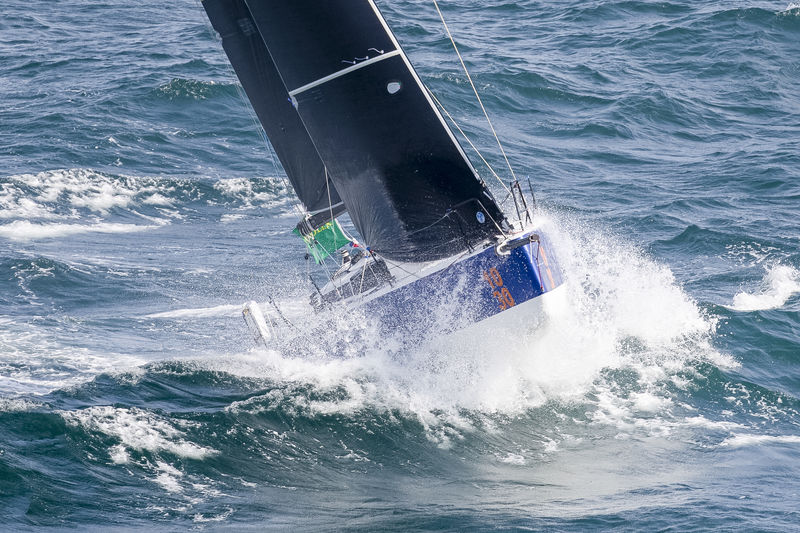 British Two-Handed teams competing for glory in IRC Three include the leading team for the class in the 2021 RORC Season’s Points Championship. Rob Craigie’s Sun Fast 3600 Bellino, racing with Deb Fish. Bellino’s best Rolex Fastnet Race to date was 2017 with a  third in both classes. Between them, Rob and Deb have competed in 18 races.

“We're as always excited by the pinnacle race of the season,” commented Deb Fish. “It's a fascinating course with lots of challenges for the navigator and we have already started analysing the tides and strategies for passing Alderney for the new course. We would love to do better than our 2017 result, but that will be a tall order with the influx of boats and talent into the class.” 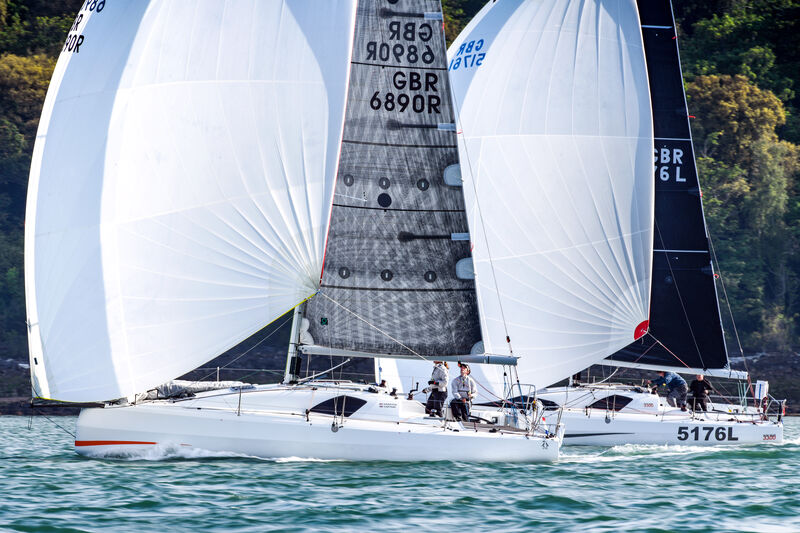 A new Two-Handed pairing this year and proven race winners are James Harayda and Dee Caffari racing Sun Fast 3300 Gentoo. Dee has vast offshore experience, including the Volvo Ocean Race, six Round the World races, the Vendée Globe, and was the first woman to sail solo, non-stop around the world in both directions. James competed in 2019 on Gallivanter and is looking forward to the new course and tactical decisions that come with it. “I love the race for the adventure, excitement and challenge and am looking forward to the new finish destination of Cherbourg,” said Harayda.

Henry Bomby and Shirley Robertson will be racing Sun Fast 3300 Swell in the Rolex Fastnet Race. Henry was second in the Two-Handed Class in 2019, racing Fastrak XI with Hannah Diamond. Four times Figaro sailor Henry Bomby also competed in the last Volvo Ocean Race and this will be his fifth Rolex Fastnet Race. Shirley Robertson was the first British woman to claim consecutive gold medals in the Olympics. This will be Shirley’s third race, but she is under no illusion that it will be a very different experience, racing doublehanded in the Rolex Fastnet Race for the first time. 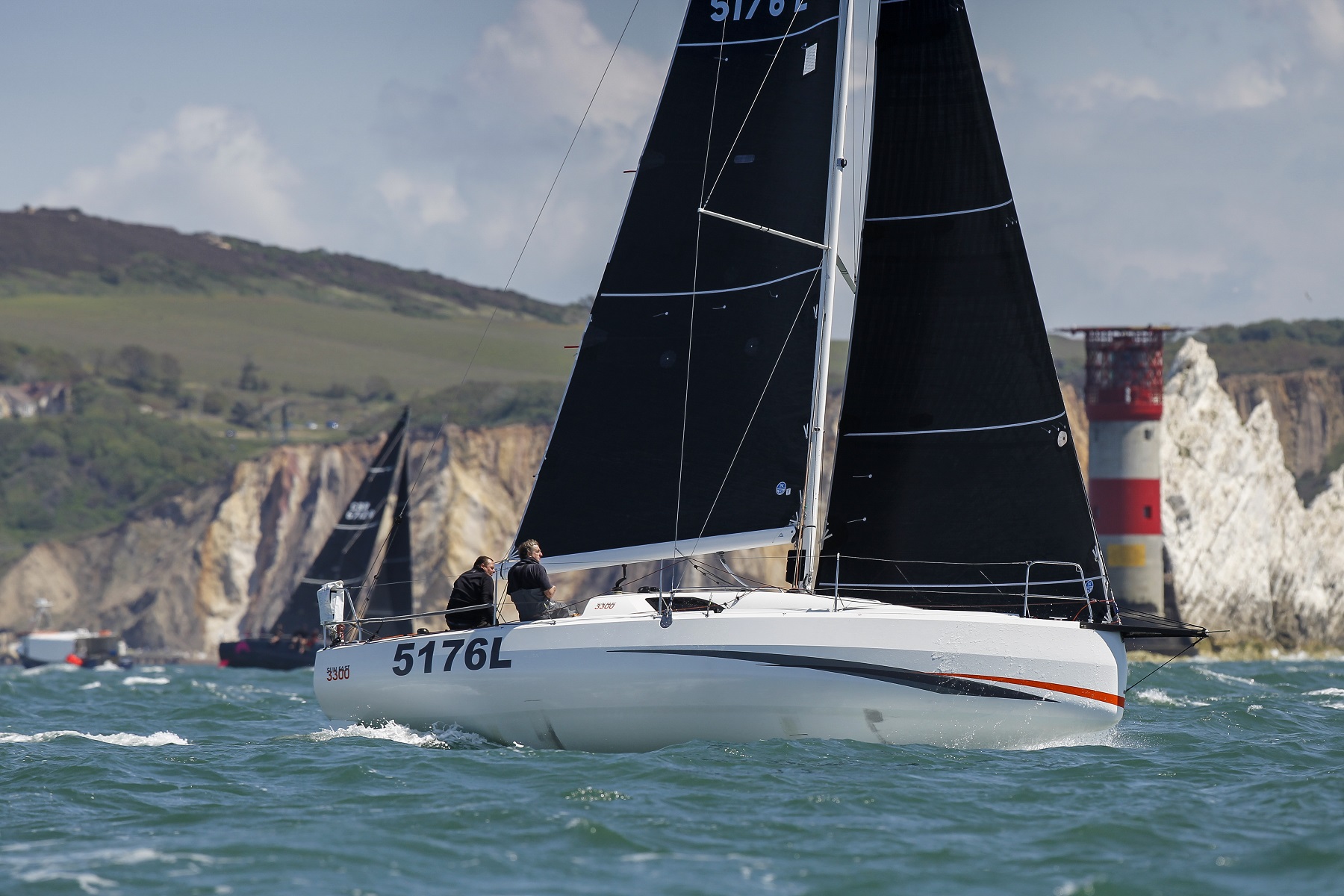 2015 Two-Handed winners Kelvin Rawlings and Stuart Childerley will be racing Kelvin’s Sun Fast 3300 Aries. Kelvin is an amateur sailor with decades of big boat racing success. Stuart is a two-time Etchells World Champion and double-Olympian. Stuart will be racing after returning from the Tokyo Games where he is Race Officer for the Finn Class. The Aries crew has a combined age of 126 years. Earlier in the 2021 season, Aries put in a winning performance beating both Bellino and Gentoo. "It’s all down to Stuart Childerley, I am only the labourer on the bow!" joked Rawlings. "Our aim is to win by sailing as best and as hard as we can. I enjoy every second of it.”

Veteran racer Alex Bennett will be racing Two-Handed with fellow pro-sailor, Conrad Humphreys in his 1984 Swan 46 Ginny B. The British teams accolades run off the page with Bennett excelling in the Mini Transat and Class40 arena, whilst Humphreys’ success includes winning skipper in the BT Global Challenge and completing the Vendée Globe.

“The challenge is always bigger when you go shorthanded and it offers the greatest challenge over this kind of course,” says Bennett, who is in awe of the IRC Two-Handed fleet. “It is huge - like the Mini Transat fleet in terms of numbers.” Bennett first sailed the Rolex Fastnet Race in 1995, when, aged 19, he led the Fastnet Youth Challenge to second place in class aboard a Sigma 36.”

Fully Crewed Internationals
Over half of the teams racing in IRC Three for the Rolex Fastnet Race will be competing with a full crew. With team rotation and all hands on deck for manoeuvres, these teams can push their boats harder for longer than their doublehanded adversaries. Whilst the Two-Handed favourites come from France and Great Britain, there is a rich diversity of nationalities racing fully crewed with British and French teams joined by crews from Belgium, Germany, Ireland, the Netherlands, Switzerland, Russia and the United States.

This will be the fourth Rolex Fastnet Race in a row for the Black Sheep crew. Trevor Middleton bought the Sun Fast 3600 from new to win the 2019 RORC Season’s Championship overall. “Always nice to round the Rock and I’m looking forward to seeing what the different route is like,” commented Middleton. The Rolex Fastnet Race is always a ‘must do race’ on the calendar. We like the bigger races, Rolex Fastnet, RORC Caribbean 600, Rolex Middle Sea etc. The most difficult part is getting to the start line with everything ready and prepared, but the race is simply a classic which will be hard to miss when the time comes to stop racing. I will be competing with a crew of friends who have sailed together for a while, skippered by Jake Carter.” 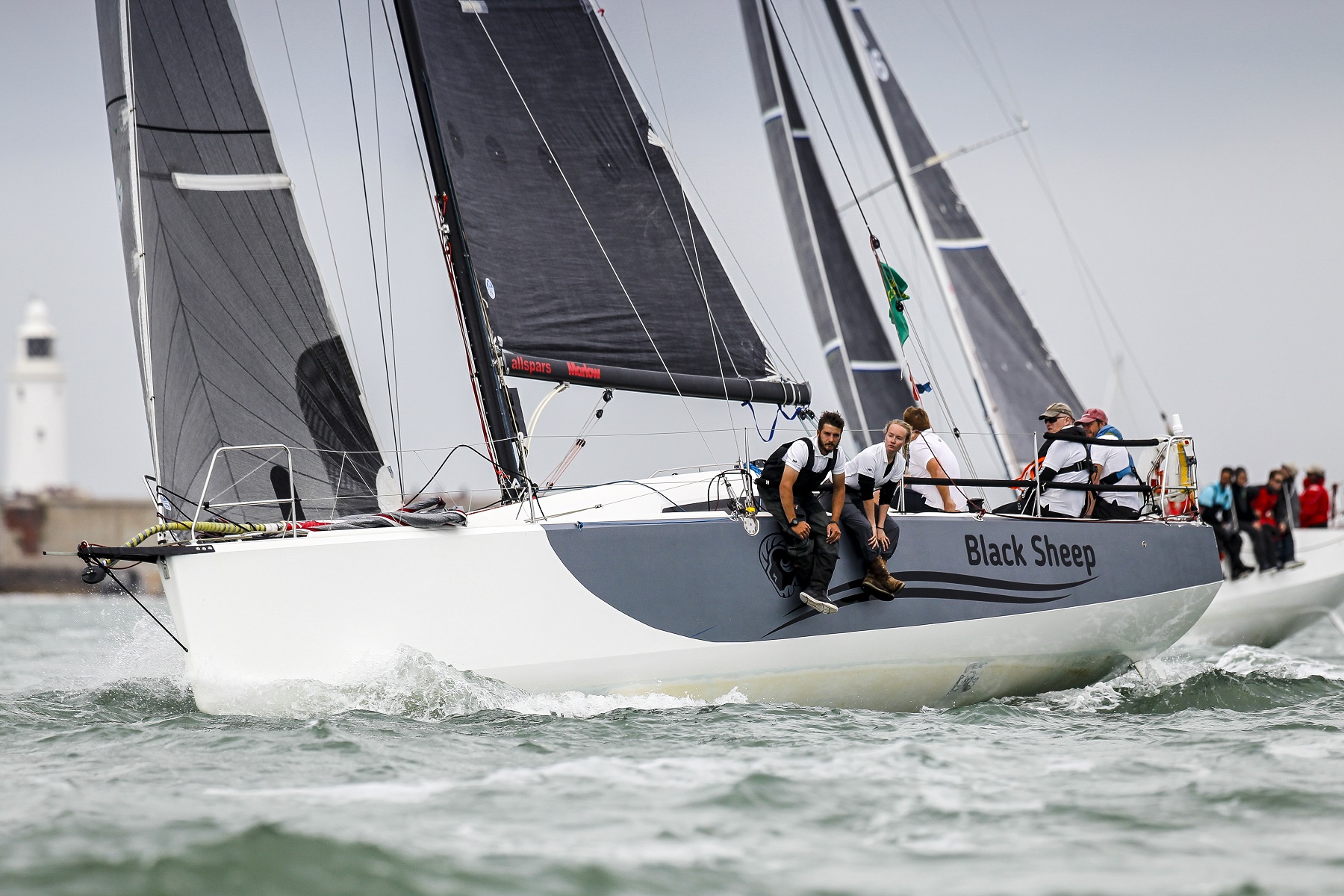 One of the fancied French teams, racing fully crewed in IRC Three, will be Louis-Marie Dussere’s JPK 1080 Raging-Bee², which will be racing to their home port of Cherbourg. Racing Raging-Bee² raced Two-Handed in the 2019 edition and was third in class. The fully crewed Raging-Bee² was in fine form for the recent Cowes-Dinard-St Malo Race, winning IRC Three. “It is wonderful to race again in Cowes and see all our English friends on the starting line,” commented Dussere. “We know that we are very good upwind against the top competition, so, we hope there will be a lot of upwind components to the race.” 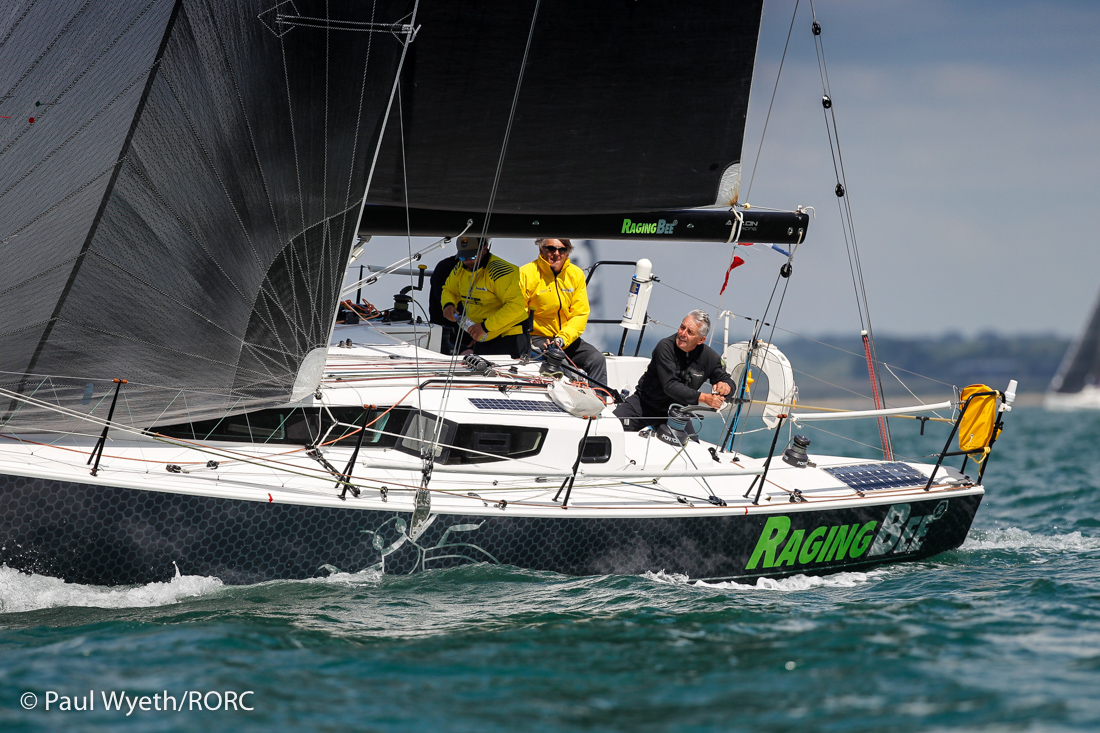 Racing fully crewed in IRC Three back to their home port of Cherbourg will be Louis-Marie Dussere’s JPK 1080 Raging-Bee² © Paul Wyeth/pwpictures.com

Denis Murphy and Royal Cork YC Rear Admiral, Annamarie Fegan will be racing Irish Grand Soleil 40 Nieulargo for the Rolex Fastnet Race. Tactician will be one of Ireland’s top sailors, Nicholas O’Leary, who has competed in three races, including doublehanded with Alex Thomson on IMOCA60 HUGO BOSS. The Nieulargo crew includes 21-year-old Harry Durcan, a champion Optimist, Laser and 29er sailor, and Killian Collins who represented Ireland in the 2004 Olympic Games.

“All of the crew are from Cork, including Denis’ two daughters Mia and Molly who are the principal drivers, and bow woman extraordinaire, Cliodhna Connolly,” commented Nicholas. “We had a good result winning the Dun Laoghaire Dingle Race overall this year, to add to a win in the Dun Laoghaire to Cork race in 2020. Nieulargo will be proudly representing the Royal Cork Yacht Club and as always, it will be a special moment in the race when we round the Fastnet Rock.”

Fifteen J/109 teams have entered the Rolex Fastnet Race for the J/109 Trophy, 12 will be racing in IRC Three. One of the fancied performers in the J/109s will be Mike Yates’ JAGO, racing Two-Handed with Eivind Bøymo-Malm. This will be Mike Yates’ first Rolex Fastnet Race after 30 years of racing, which includes winning the Commodores’ Cup (way back when), Etchells, Ultras, Skiffs, Mumm30, Ton-class racing, as well as various transatlantics. Yates is also aiming for a top 10 in the Two-Handed class. 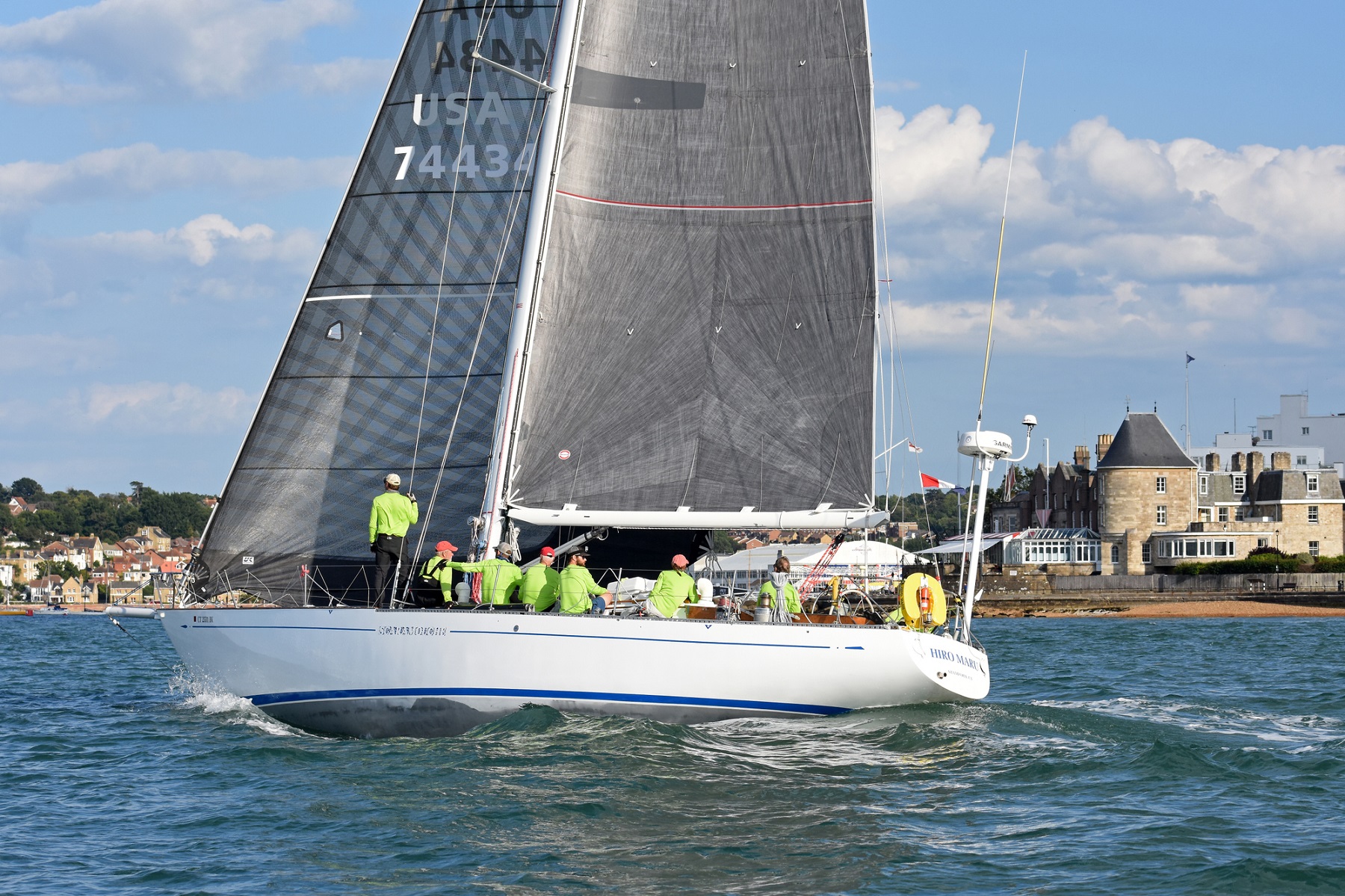 The myriad of boat designs and crews racing in IRC Three mirrors the character of the Rolex Fastnet Race. From its inception in 1925, the race has proven highly influential in the growth of offshore racing and remains closely linked to advances in yacht design and sailing technique. As always, the winner of the class will be the team that sails a near perfect race. The weather then decides if the class winner will win the Rolex Fastnet Race overall, but with recent winners of the race coming from IRC Three, this class will be one to watch.