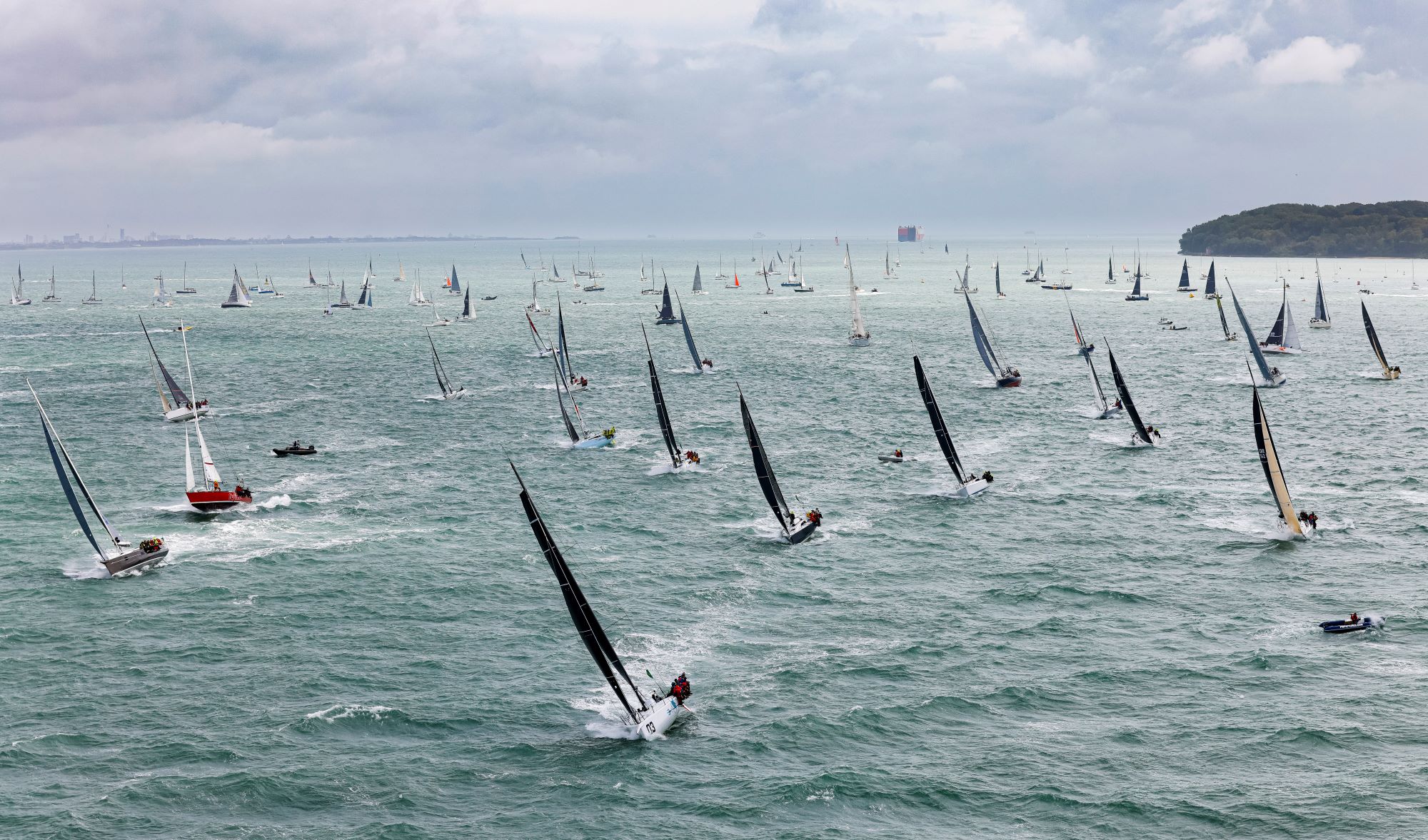 A fleet of 337 boats leave the Solent, bound for the Fastnet Rock in the 2021 Rolex Fastnet Race © Carlo Borlenghi/Rolex
The Rolex Fastnet Race has a reputation for the severe weather that it can throw at its competitors. Still strongly remembered is the 1979 race that cost 19 lives. Today the 49th edition of the 96-year-old offshore racing classic lived up to its fame as the first of seven starts got underway at 15 minute intervals starting at 1100 BST. Over the last three days strong southwesterly winds have been blowing up the Channel and competitors in the Royal Ocean Racing Club’s premier event were treated to these same headwinds gusting into the 30s and, as the tide turned off the Needles and in the western Solent, a building wind-against-tide sea state developed.
COVID, international travel restrictions due to COVID, plus Brexit have resulted in this year’s Rolex Fastnet Race being a unique affair. This along with a lively forecast for the race’s first 24 hours caused entries to drop as start day approached. Nonetheless crossing line today off Cowes was still a highly impressive turn-out of 337 boats from 24 nations including Japan, Mexico and eight from the USA, but the majority from Europe, including the largest ever turn-out from France.
Despite winds gusting to 35 knots, the starts got away well. Among the multihulls, it was the favourites and defending champions, Volvo Ocean Race winners Franck Cammas and Charles Caudrelier on the Ultime trimaran Maxi Edmond de Rothschild that pulled the trigger most rapidly. They were followed by Thomas Coville’s Sodebo Ultim 3 and the Yves le Blevec-skippered Actual, but with the two MOD70s Maserati and Argo of Giovanni Soldini and Jason Carroll respectively, leading the charge in the MOCRA fleet. Incredibly just three hours after starting the Ultimes had already crossed the Channel and were putting in a tack to the west of Cape de la Hague, setting themselves up unusually to pass south of the Casquets TSS. 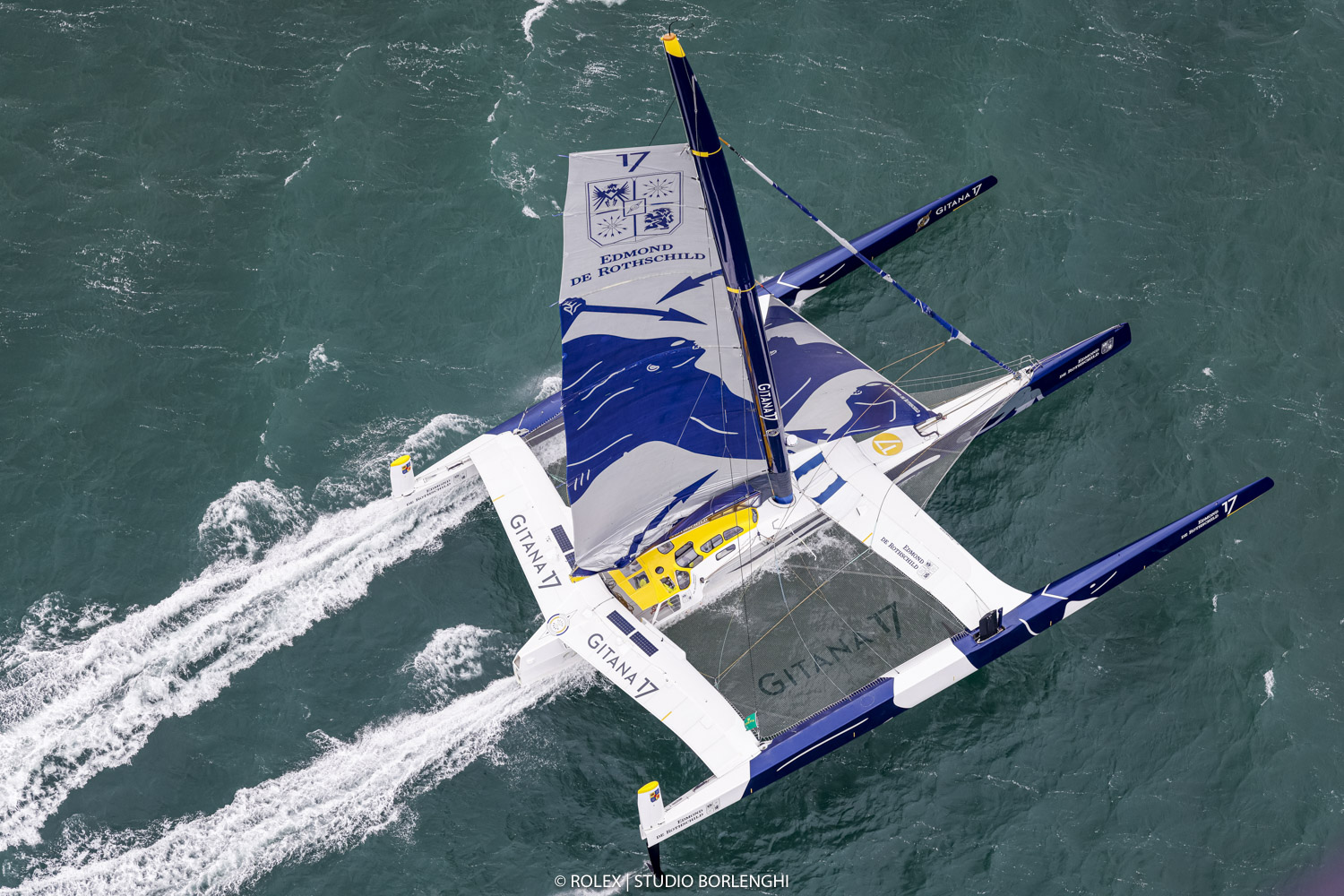 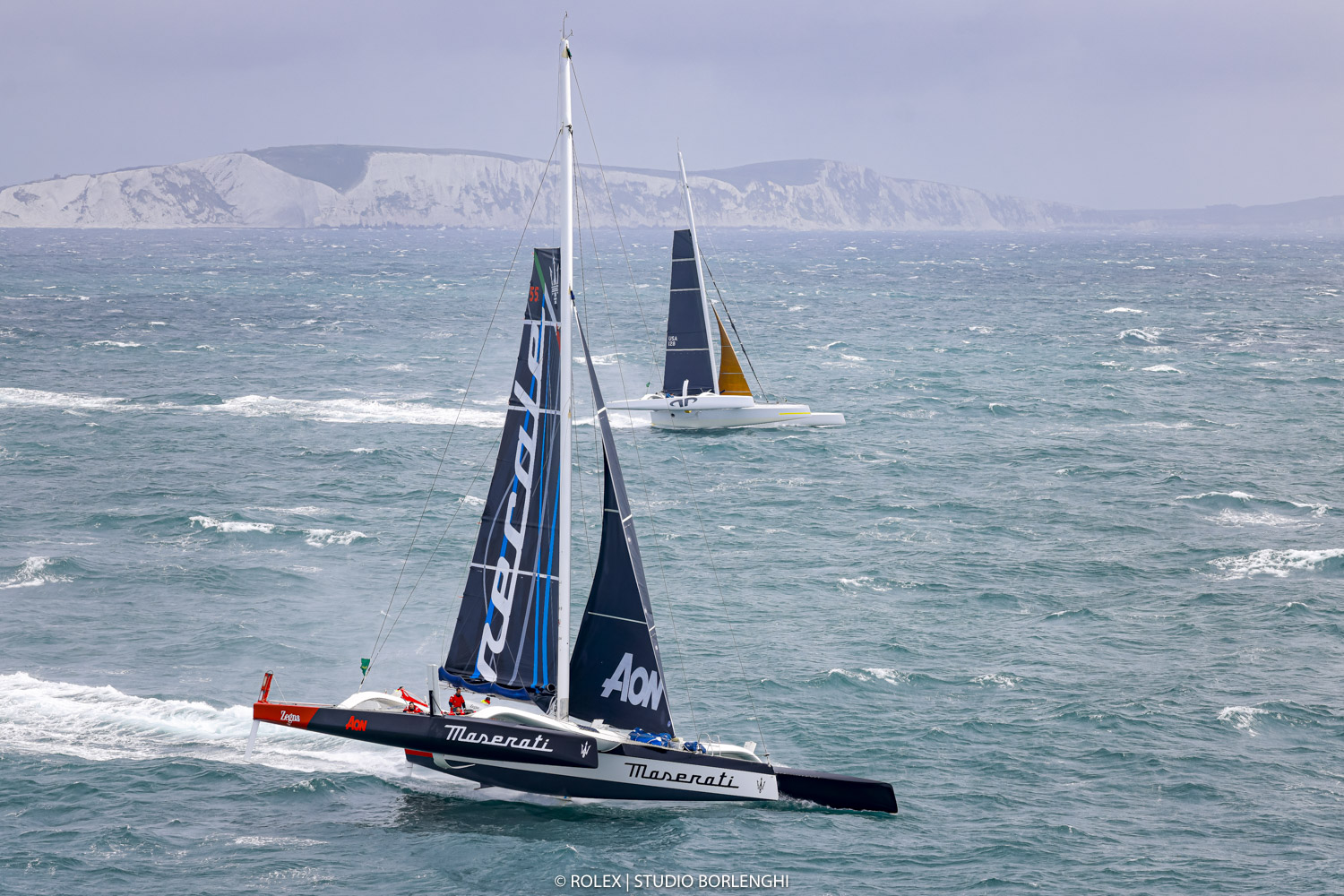 Similarly an early stand-out leader in the IMOCA class was Charlie Dalin and Paul Meilhat aboard Apivia, which earlier this year arrived home first in the Vendée Globe, only to see victory elude him when Yannick Bestaven on Maître CoQ was awarded time compensation for his part in a rescue. Sadly, Bestaven was about to start today when his IMOCA was involved in a collision with a vessel damaging her bow and forcing him to retire.
“It is very upwind to the Fastnet, with strong breeze to start with at the Needles,” forecast Dalin this morning, this being his first race since the Vendée Globe. “The sea will be pretty rough with wind against tide. We will have more than 30 knots at some point. It will be pretty tense. There are some routing options including a southerly route across to France, close to Guernsey.
“There are some small shifts, so at some point we should be slightly freer than fully upwind, when we’ll be able to use the foils. With our big foils we fly fairly early.” The latest IMOCA foilers showed huge pace exiting the Solent in the strong winds, enabling them to stay up with substantially larger boats.
Showing great pace exiting the Solent among the Class40s was Emmanuel Le Roch’s Edenred. However by mid-afternoon as the Class40s were also heading out into the Channel, Axel Trehin’s Project Rescue Ocean and Aurelien Ducroz on Crosscall were leading towards the Cotentin peninsula as another favourite, Antoine Carpentier's Courrier Redman, on which former winner Gery Trentesaux is competing, was one of the few Class40s to have tacked north. 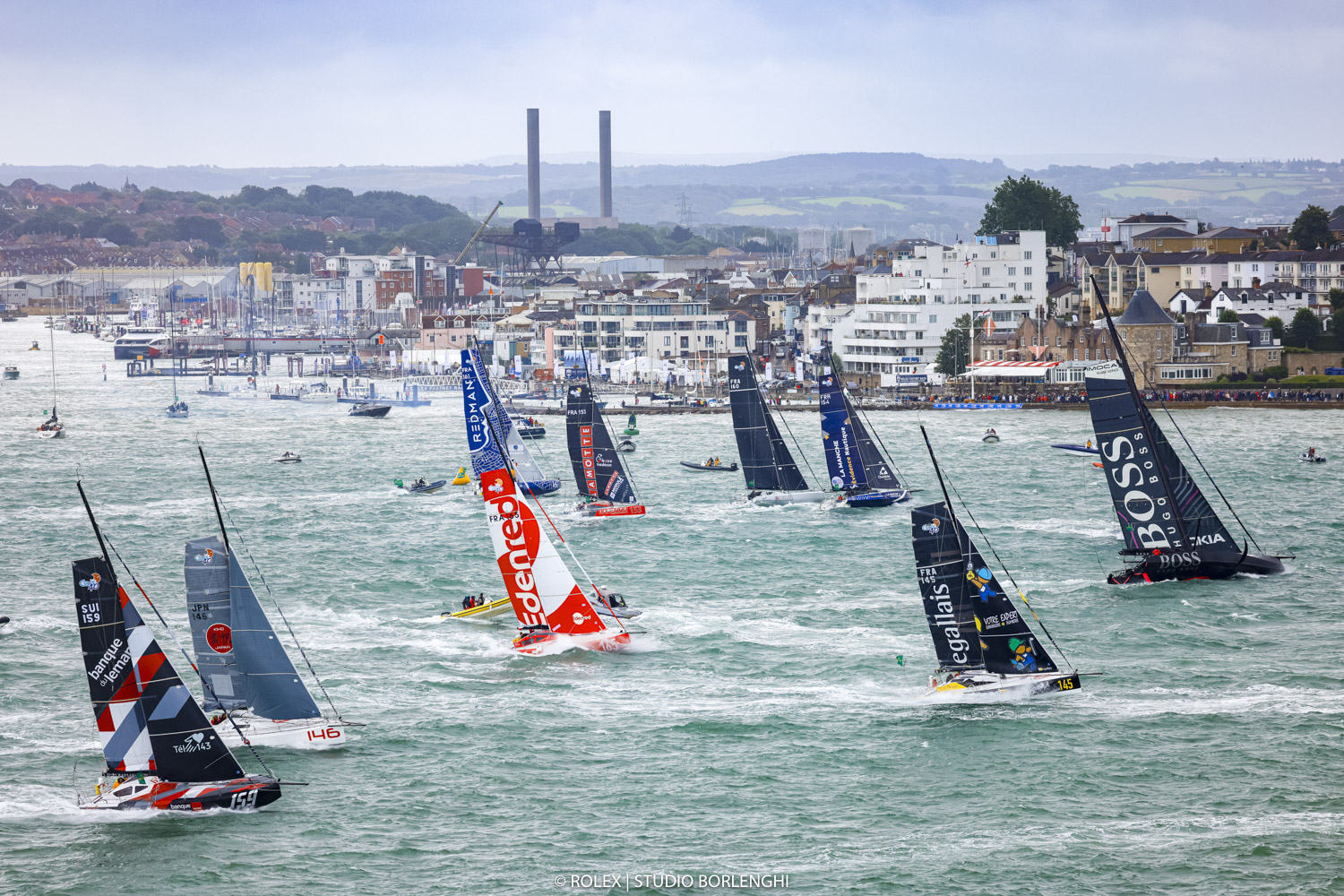 IMOCA 60 and Class40 start off the Royal Yacht Squadron, Cowes in the Rolex Fastnet Race © Carlo Borlenghi/Rolex
Seeing the maxis in IRC Zero, led by Dmitry Rybolovlev’s ClubSwan 125 Skorpios and George David’s Rambler 88, powering down the Solent in the building sea state and then crashing through large waves off Hurst was a sight to behold. Despite their huge length disparity, Rambler 88, monohull line honours winner in the last two editions, was doing well to keep up.
With the breeze looking to lighten mid-week, the smart money is on the hot boats in IRC Zero to win the Fastnet Challenge Cup. George David has his fingers crossed that Rambler 88 might score the elusive ‘triple’ – overall IRC win, monohull line honours and a new course record (likely since this is the first time the race will finish in Cherbourg).
Prior to the start David was uncertain of his prospects: “I focus on the weather as you’d expect for the first 48-60 hours. It could be a tight reach to the Rock and an open reach on the way back which would be a pretty fast race, and [on the routing] it has slowly got longer as the breeze has come around more to the west and looks like there will be a fetch, at best, up to the Rock and that will be a 60+ hour race. But it will be what it will be.”
Of the competition with Skorpios, David added: “I’d like to get line honours for a third time, but that’s going to be a tough challenge with this big new boat out there. It’s a big powerful boat, quite a bit longer than we are, with a lot of stability and it will go really fast on most points of sail, I think most especially on a 90-110° reach.
“If it starts to blow really hard, into the 30s, we might have an edge because we’ve been at this with the same team and with the same boat now for six years. This boat is pretty optimised and it’s pretty well sailed and most things that might break have already broken.”
While the grand prix classes were heading south, both Skorpios and Rambler 88 were taking a more classic route tacking along the Dorset coast including a long dive into the bay east of Portland (Skorpios’ base recently). They were followed by Jens Kellinghusen’s Ker 56 Varuna. 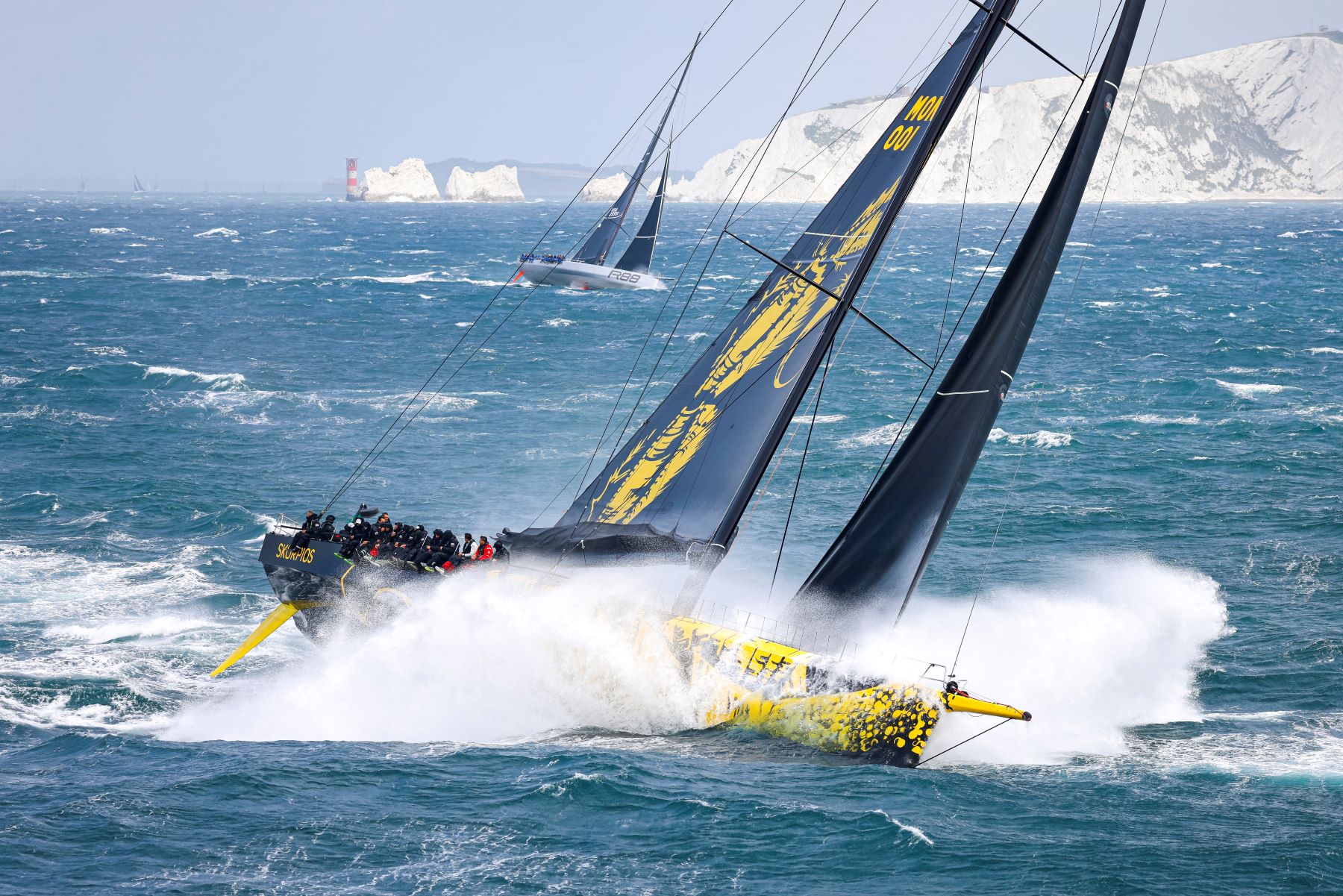 Dmitry Rybolovlev's ClubSwan 125 Skorpios and George David's Maxi Rambler 88 beating into the English Channel © Carlo Borlenghi/Rolex
Also heading south out into the Channel this afternoon are most of IRC One, with RORC Commodore James Neville leading on the water aboard his HH42 INO XXX. However hanging on to his coattail was not another all-carbon fibre grand prix racer but the venerable Dutch maxi Stormvogel. Under her original owner Cornelius Bruynzeel, this 1961 vintage van de Stadt-designed 73ft ketch won line honours in the Fastnet Race 50 years ago. Early leaders on corrected time in IRC One were David Cummins’ Ker 39 Rumbleflurg and Rob Bottomley’s Mat 12 Sailplane.
IRC Two was also heading south this afternoon with Tom Kneen’s youth crew on board the JPK 10.80 Sunrise leading on the water from sisterships Eric Fries’ Fastwave 6 and Richard Fromentin’s Leclerc Hennebont / Cocody. All were looking good under corrected time too but with Oliver Grant’s First 40 Jazz out in front, also heading the Performance 40 ‘race within a race’.
Like the yachts ahead of them, all but a handful of boats in IRC Three were choosing a long starboard tack out into the Channel. Here Ireland’s Denis Murphy and Royal Cork YC Rear Admiral Annamarie Fegan on their Grand Soleil 40 Nieulargo were already the stand-out performers. Their Cork entry was leading on the water and on corrected time, despite their boat being by no means the fastest in their class. Tactician on board is Nicholas O’Leary from the famous Irish sailing dynasty.
As in IRC Two, in IRC Four, yachts from French builder JPK were enjoying similar success with the Butters family’s Poole-based JPK 10.10 Joy leading on the water alongside sistership Benoit Rousselin’s Delnik. As a preliminary indicator of progress, Delnik was leading under IRC from Harry J. Heijst’s S&S 41 Winsome, no doubt taking the ‘washing machine’ conditions in her stride better than her newer lighterweight rivals.
Richard Palmer and Jeremy Waitt racing doublehanded on yet another JPK 10.10, Jangada, had some work to do lying in 20th at this early stage. Prior to the start Palmer said that “getting out past the Needles without breaking anything will be the first challenge; The forecast is looking quite lively with 20-30 knots wind against tide. You can certainly loose the race there. It will be wet and windy for the first 24 hours. And then it is hunker down and persevere. We are looking for the wind to free off as we go across the Celtic Sea, but that means that when we round the Rock there will be a bit more southerly in it, so a reach back and then with a bit of luck spinnaker up at the Scillies and then see what the end of next week has in store for us.”
“I am really looking forward to going into Cherbourg. I have heard they have pulled out all of the stops to make us welcome there. A lot of European boats have been there already and now they have relaxed the quarantine regulations here we’ll certainly be going in there to make the most of it.” 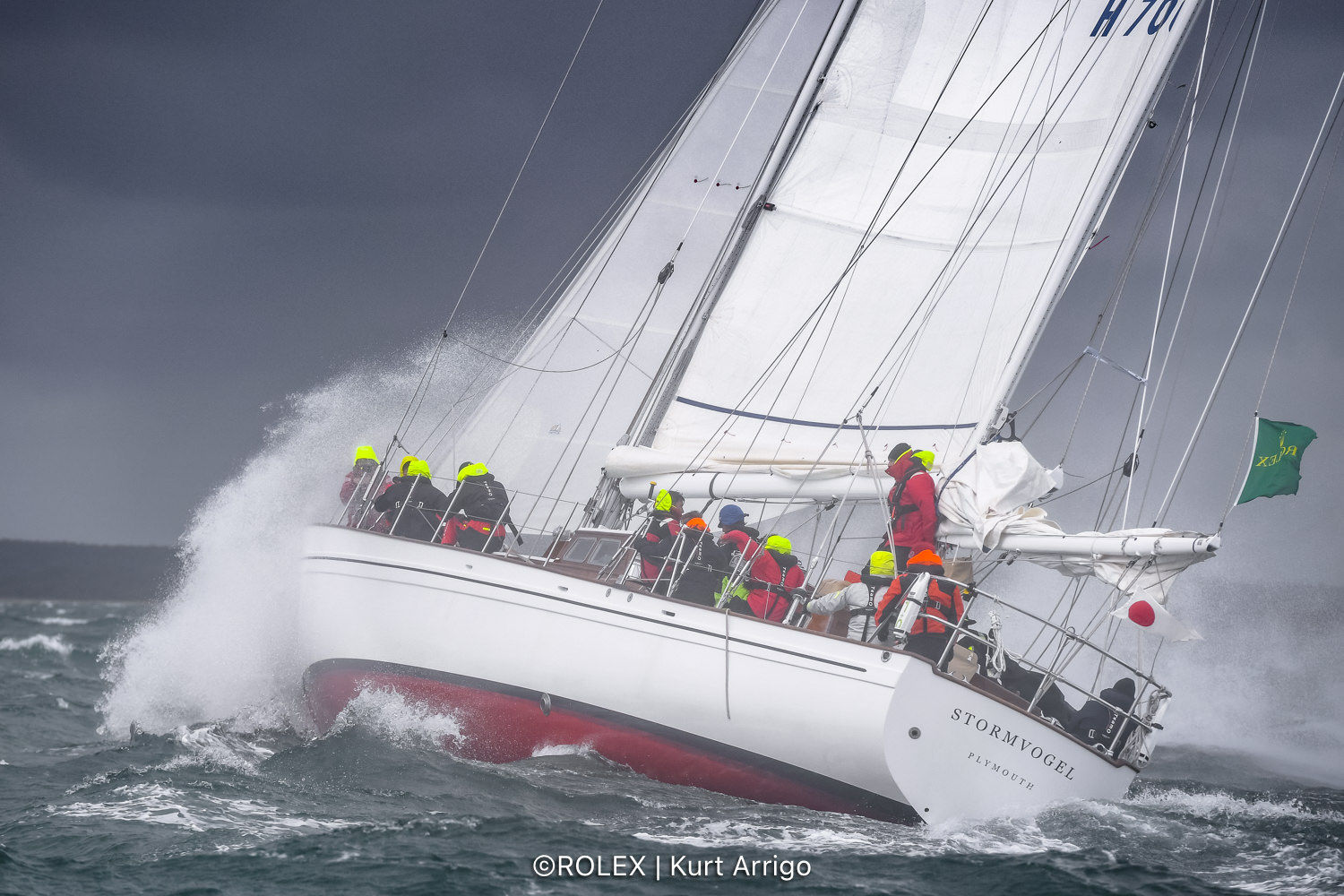 The classic 74ft 1961 ketch Stormvogel, skippered by Graeme Henry, smashes to windward after the start © Kurt Arrigo/Rolex
Inevitably in the big conditions there have already been a number of boats that have retired from the race. At 1630 UTC this was up to 24, perhaps the most devastating being Yannick Bestaven’s Vendée Globe winner Maître CoQ. Two of the MOCRA multihull favourites were also out – Christian Guyader, the 2019 winner on board his TS5 catamaran Guyader Mext and Yann Marilley’s Outremer 5x Racing catamaran No Limit on which famous sailor Loick Peyron was racing. No Limit retired after she dismasted.
One of the favourites of IRC Two, Gilles Fournier / Corinne Migraine’s J/133 Pintia was also forced to retire. Similarly Ed Bell’s JPK 11.80 Dawn Treader is out with a broken mast. In IRC One, one of the Rolex Fastnet Race’s most regular competitors, the Goubau family from Belgium, were also forced to pull out on their First 47.7 Moana.
Winners of the IRC Two Handed class in 2015 Kelvin Rawlings and Stuart Childerley, back this year to have another go at this title aboard the Sun Fast 3300 Aries sadly have also become a statistic in this race. So too have another British favourite for this class, Rob Craigie and Deb Fish on board the Sun Fast 3600 Bellino.
Competitors are expecting a breezy night but for conditions to slowly abate over the next 24 hours. 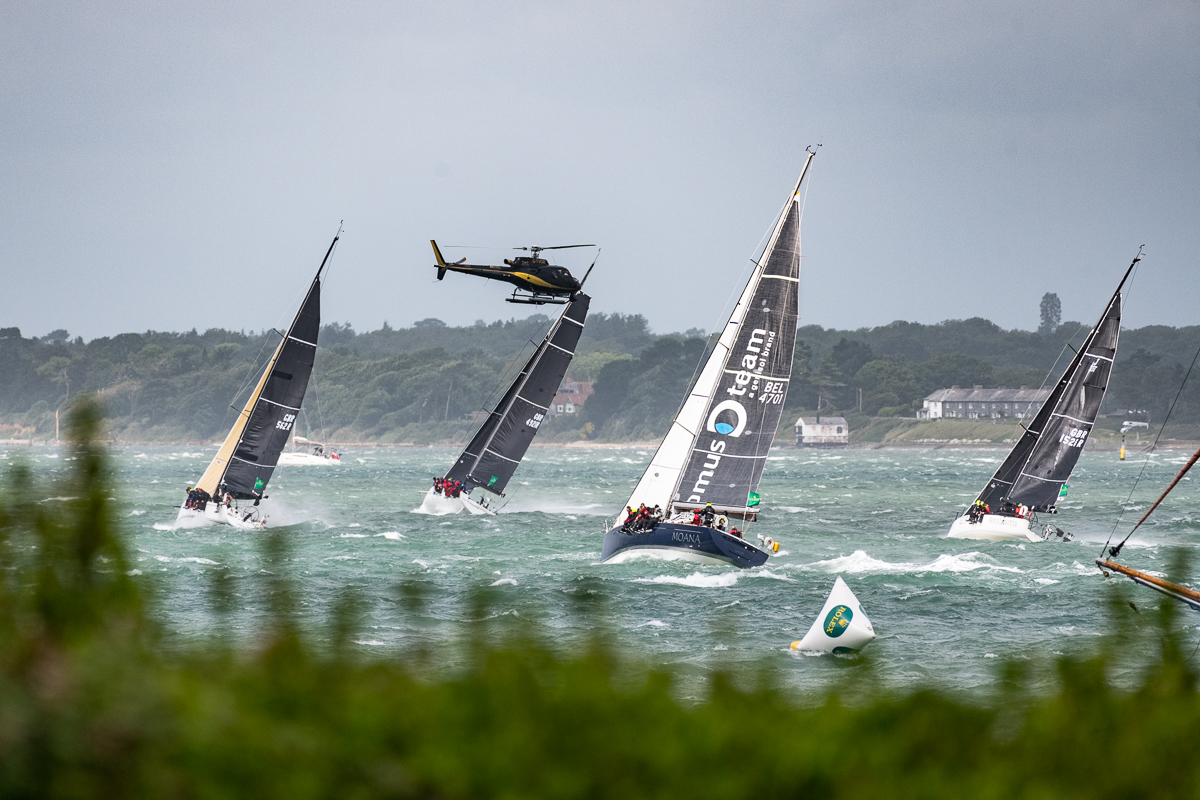