Ultimes round the Rock as the majority tackle Start Point 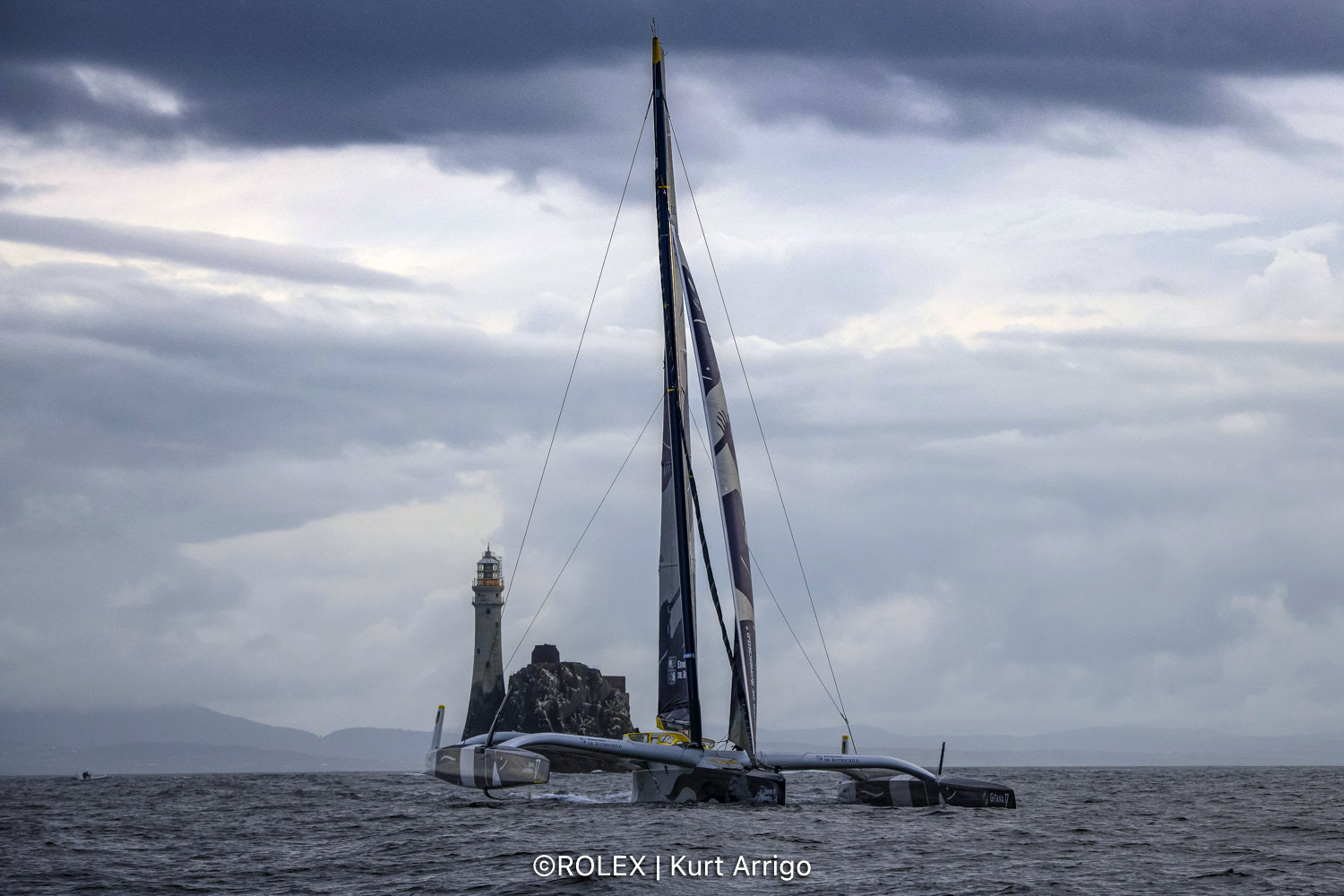 Despite a blustery start and first night at sea in the 49th Rolex Fastnet Race, competitors have been making good progress west down the English Channel, with the bulk of the fleet at breakfast time this morning south of Start Point.

Since yesterday’s dramatic, brutal departure from the Solent for the 337 entries in 25+ knot southwesterly headwinds and violent wind against tide seas, overnight the wind has slowly eased. It is still gusting to the early 20s, especially around headlands, but is dropping the further west the competitors sail, with 15-20 knots off the Lizard and 13-15 off Land’s End.

While the majority of the Rolex Fastnet Race fleet is still toughing it out in the Channel, at 0800 BST this morning Maxi Edmond de Rothschild was the first Ultime to reach the Fastnet Rock. While not a record time – in 2019 she led around the Rock at 0633, less than two minutes ahead of Francois Gabart’s MACIF – her time of just 20 hours 50 minutes is almost three hours slower, but nonetheless highly impressive given that this time the boats have been upwind down the Channel and then fetching across the Celtic Sea. This time is also not as close with Thomas Coville’s second placed Sodebo Ultim Voile some 43 miles astern of her.

“We have just passed the Fastnet, leading the fleet,” reported Charlies Caudrelier, co-skipper of Maxi Edmond de Rothschild with Franck Cammas. “We're at least 40 miles ahead of the second which is good. We have sailed very well since the start of this race and are proud of what we have done. The boat is going fast and we have not made any navigation errors. Now we go back to the Scilly Isles. The last part, with gybes, will be complicated. We know that it is difficult to get to Cherbourg, especially when there is little wind. We remain focused on the speed of the boat and we will try to extend our lead. We will not be flying much on this leg to Cherbourg." 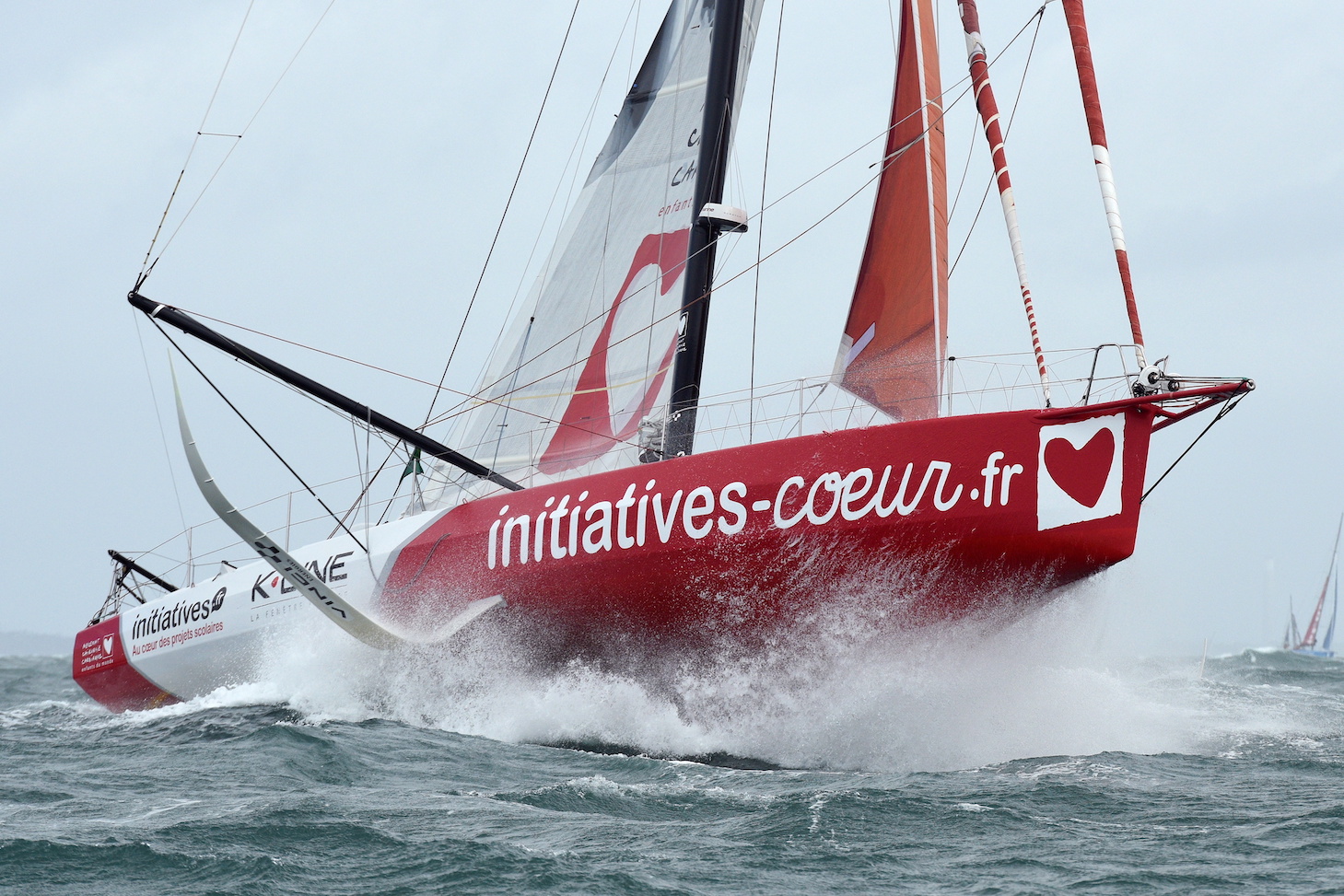 Most surprising have been the tactics of the Ultimes and some of the IMOCAs, which forged off south after leaving the Solent yesterday and going south of the Casquets Traffic Separation Scheme (TSS). While the Ultimes tacked close to Alderney, some of the IMOCA dived even further south. Initiatives Coeurs skipper Sam Davies explained their reasons for this:

“Nico [Lunven, her co-skipper] had done a lot of work on the weather routing with lots of different models and pretty much all of our routing went that way, because we might get flat water in the Alderney Race, sheltered by the Channel Islands and be first into the west going current off the north French coast.”

Hearing her on board, as Initiatives Coeur was passing Land’s End this morning, was difficult as her co-skipper at the time was easing the mainsheet:

“We exploded one mainsheet block - it is not an issue, it just makes it bit noisy to trim. Still it is a pleasure to be going at full speed after sailing such a long way around the world in safety mode [completing her lap of the planet after retiring from the Vendee Globe last winter].”

This morning Davies was enjoying racing her two close friends Simon Fisher and former Team SCA crew Justine Mettraux, who were alongside her aboard 11th Hour Racing.

Leading the charge among the monohulls is of course Russian Dmitry Rybolovlev’s mighty ClubSwan 125 Skorpios. At 0700 this morning, the largest single-hulled vessel ever to enter the Rolex Fastnet Race was passing between Land’s End TSS and the Scilly Isles, having allowed American George David’s Rambler 88 to split up the east side of the TSS. Perhaps most surprising was that only three miles astern of her at the time was the lead IMOCA, Apivia, a boat less than half Skorpios’ length and being sailed by two talented Frenchmen – Charlie Dalin and Paul Meilhat – their advantage being that their boat has giant foils enabling it literally ‘to fly’. 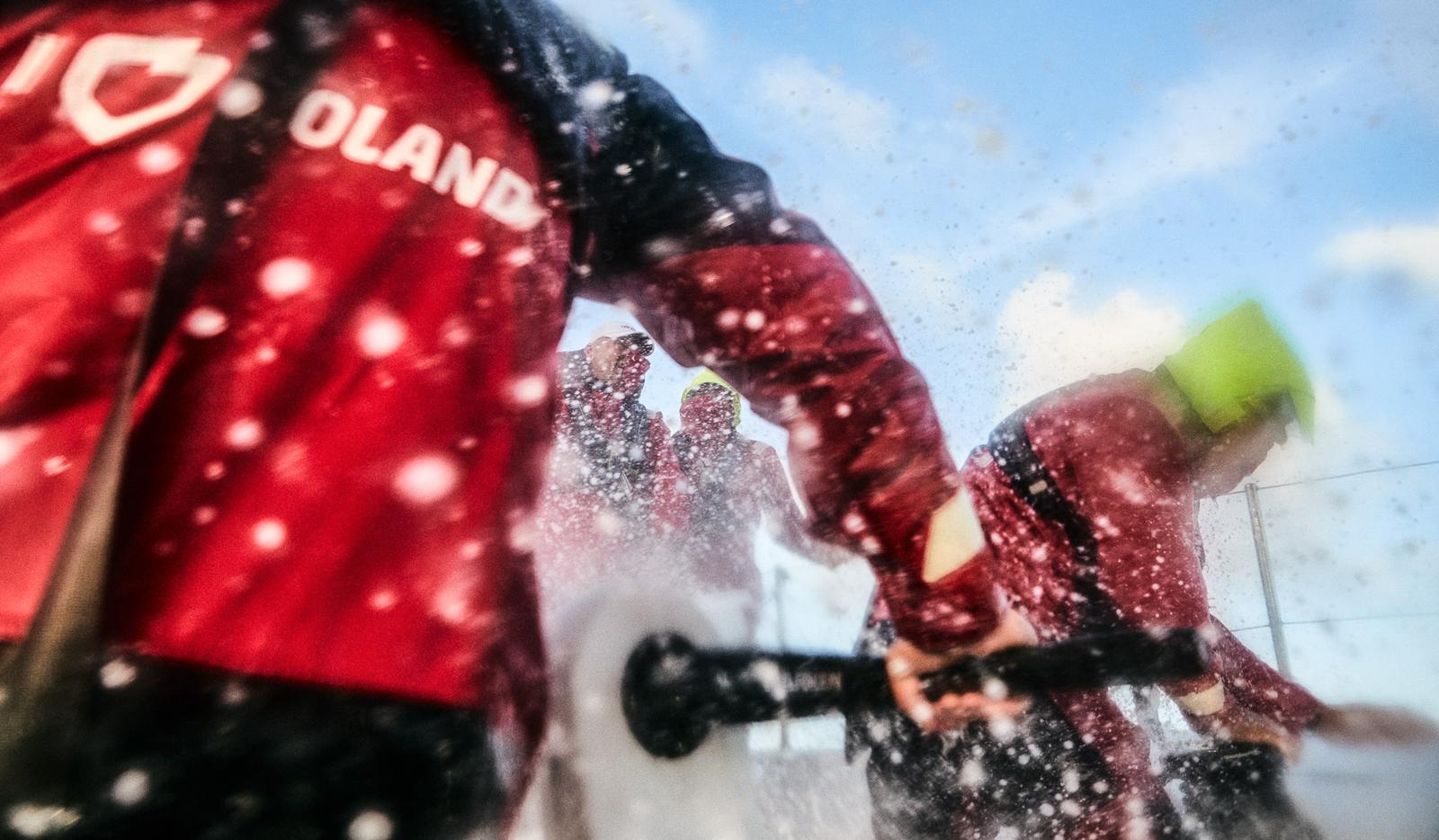 The big boats were looking good overall under IRC corrected time this morning, especially I Love Poland, the VO70 skippered by Grzegorz Baranowski, which this morning was following the route up the east side of the Land’s End TSS astern of Rambler 88, which lies second overall under IRC. Since the start, IRC Zero has seen three retirements: RORC Vice Commodore Eric de Turckheim on the NMYD 54 Teasing Machine, the Gerd-Jan Poortman-skippered Ker 46 Van Uden and Lance Shepherd's VO70 Telefonica Black.

The IRC Two leaders were this morning due south of Plymouth. The front of the fleet remains at three-way battle between international trio of JPK 10.80 sisterships, Englishman Tom Kneen's Sunrise and Richard Fromentin's Leclerc Hennebont/Cocody from France with Astrid de Vin's Il Corvo from the Netherlands further to their south. These three are also looking good under IRC along with perennial race winner Ross Applebey’s Lightwave 48 Scarlet Oyster. 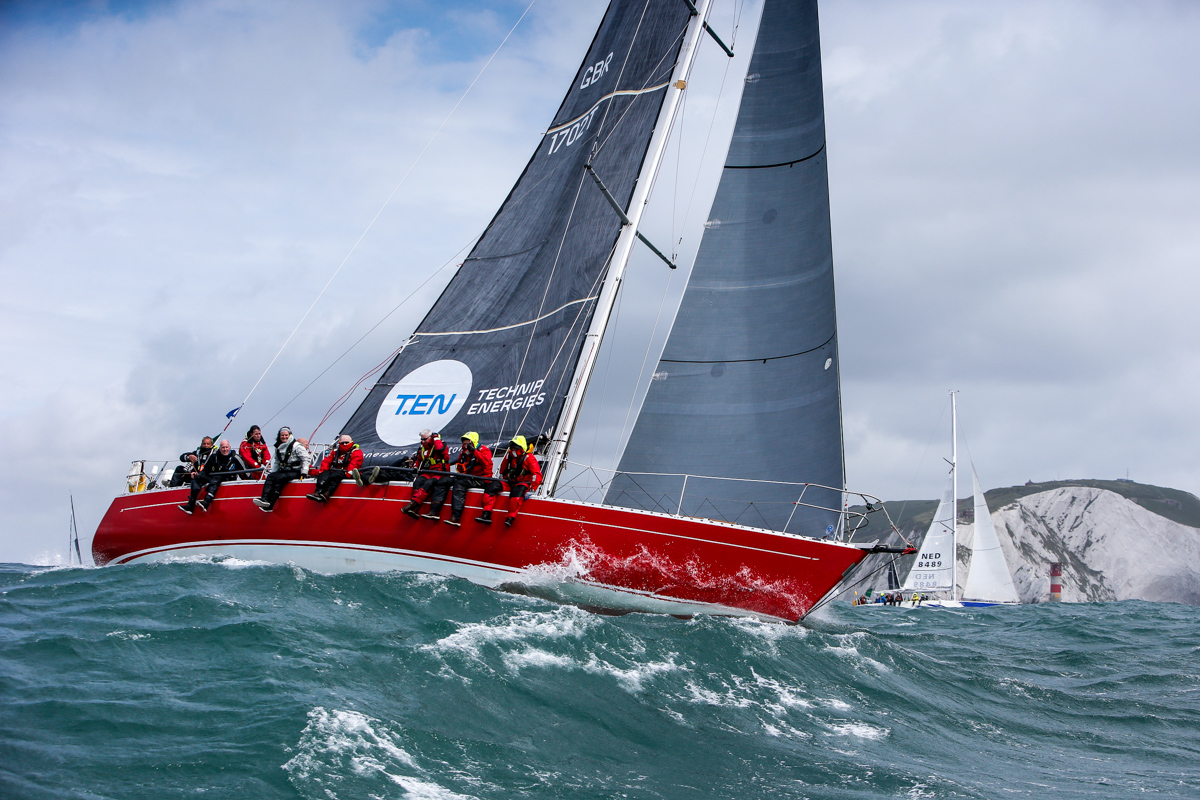 As expected in IRC Three, Alexis Loison and Guillaume Pirouelle aboard the defending class and IRC Two-Handed champion Léon have been leading under corrected time and, impressively, are right up with the front runners in IRC Two. On the water, Léon has Philippe Girardin's J/120 Hey Jude and the JPK 10.80 Raging Bee2 of Cherbourg hero Louis Marie Dussere nearby. However sneaking ahead of Léon and into the IRC Three lead this morning, coming in from the north in the otherwise French dominated class, is the Philip Caswell-skippered Sun Fast 3600 Fujitsu British Soldier. Léon is still well ahead on the IRC Two-Handed class leaderboard. Behind them, the majority in IRC Three have been taking a course tight in to Start Point.

In the void left by perennial IRC Four winner Noel Racine, France still dominates the leaderboard in this class with Francois Charles' Dehler 33 Cruising Sun Hill 3 ahead of Alain Guelennoc's X-332 Trading-advices.com and Ludovic Menahes and David le Goff's JPK 10.10 Raphael. However all were taking different tactics with Trading-advices.com hugging the Devonshire coast en route towards Plymouth with her rivals having tacked offshore. The top British boat is Chris Choules’ modern classic Sigma 38 With Alacrity the top British boat in sixth under IRC. The majority of IRC Four has yet to pass Start Point. 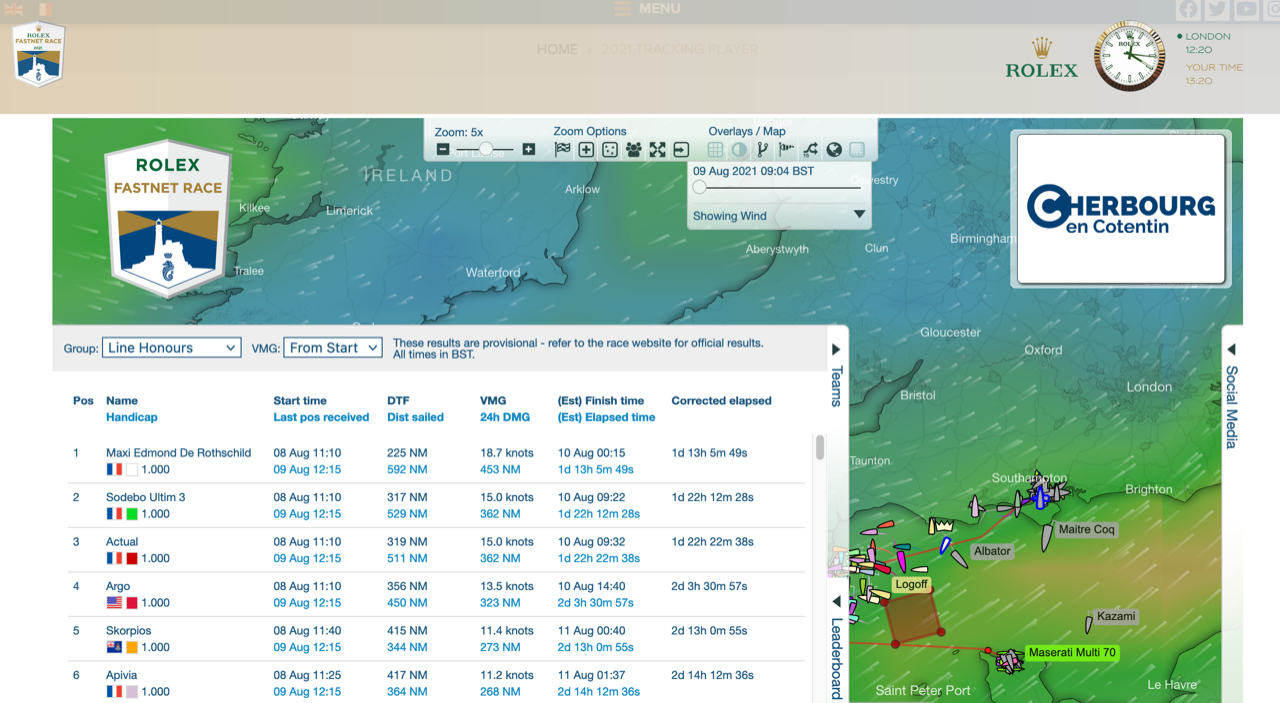 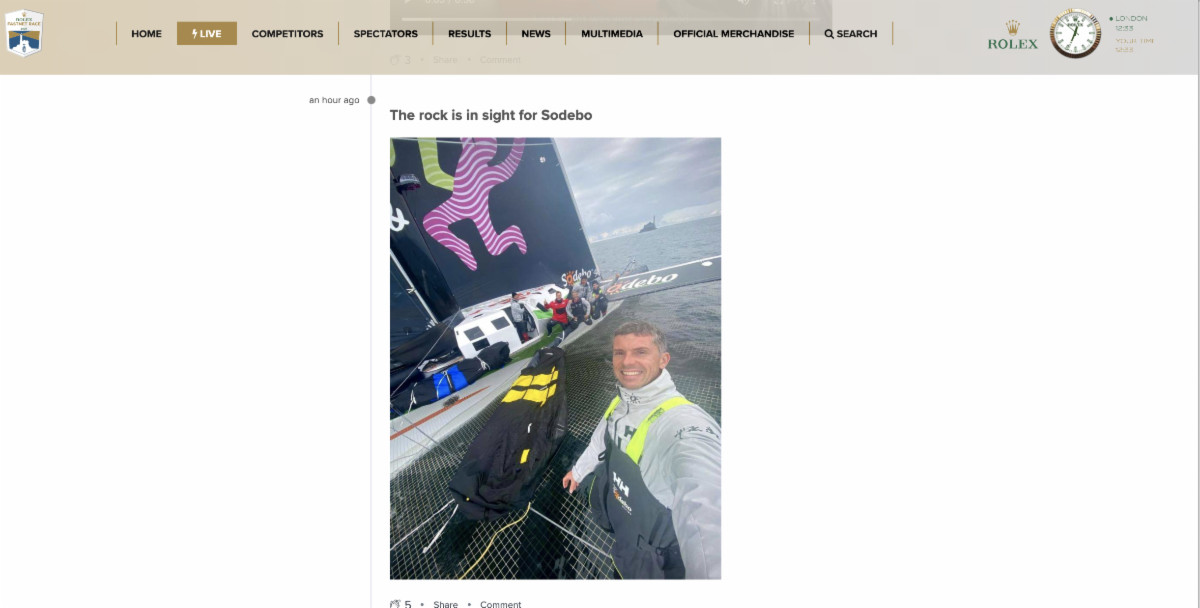