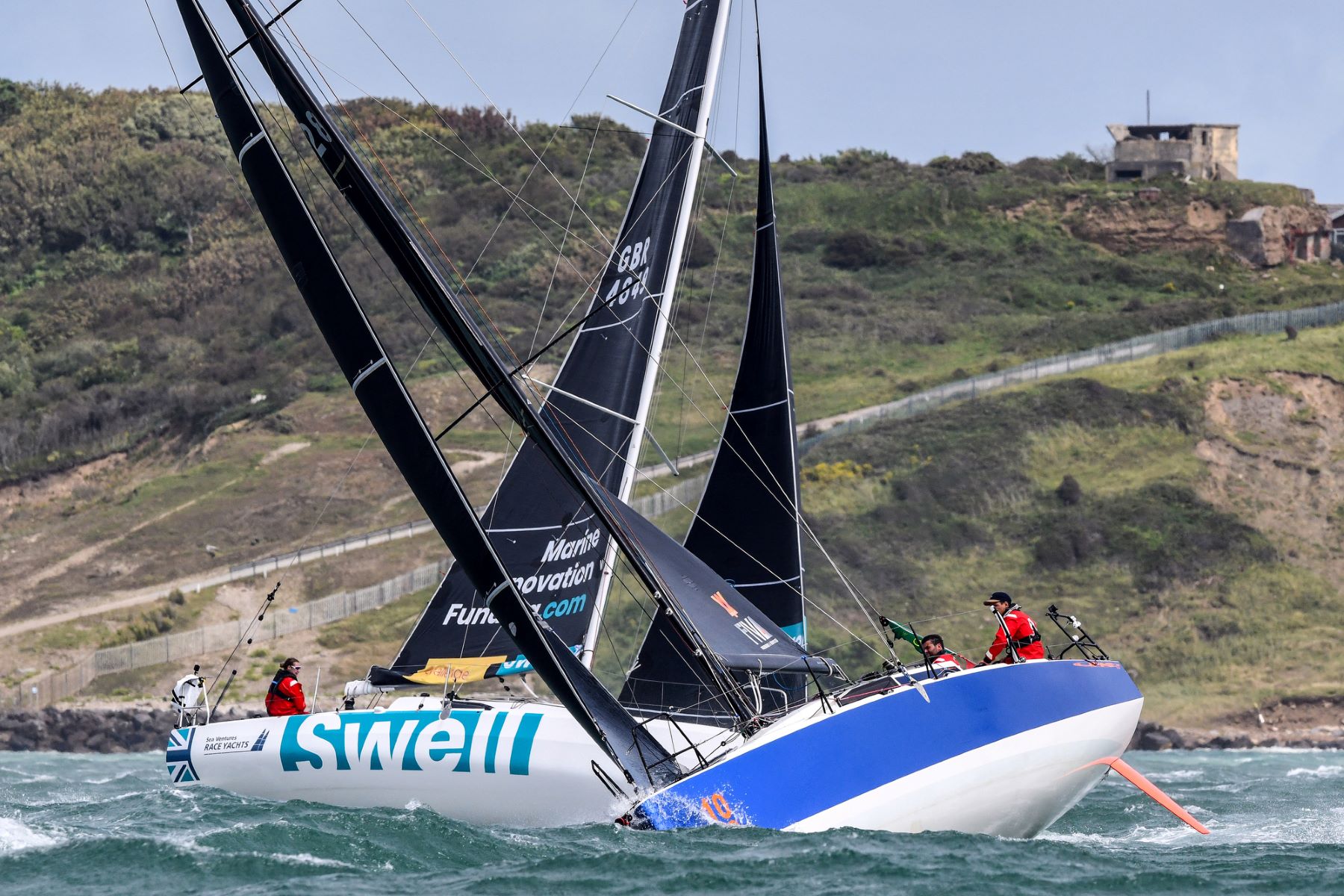 73 teams started the Rolex Fastnet Race in IRC Three. However, the feisty conditions have resulted in 14 boats retiring or discontinuing racing. After beating in close quarters in the Solent, the fleet braced themselves for even bigger conditions across Poole Bay. The first big headland of the race was Portland Bill, and there was a split decision in strategy to round the landmark. Alexis Loison & Guillaume Pirouelle, racing JPK 1030 Léon, led the boats on the water inshore at Portland. Offshore, a pack of three boats led the contingent: Philippe Girardin’s J/120 Hey Jude, Denis Murphy & Annamarie Fegan’s Grand Soleil 40 Nieulargo and the Army Sailing Association’s Sun Fast 3600 British Soldier, skippered by Philip Caswell. 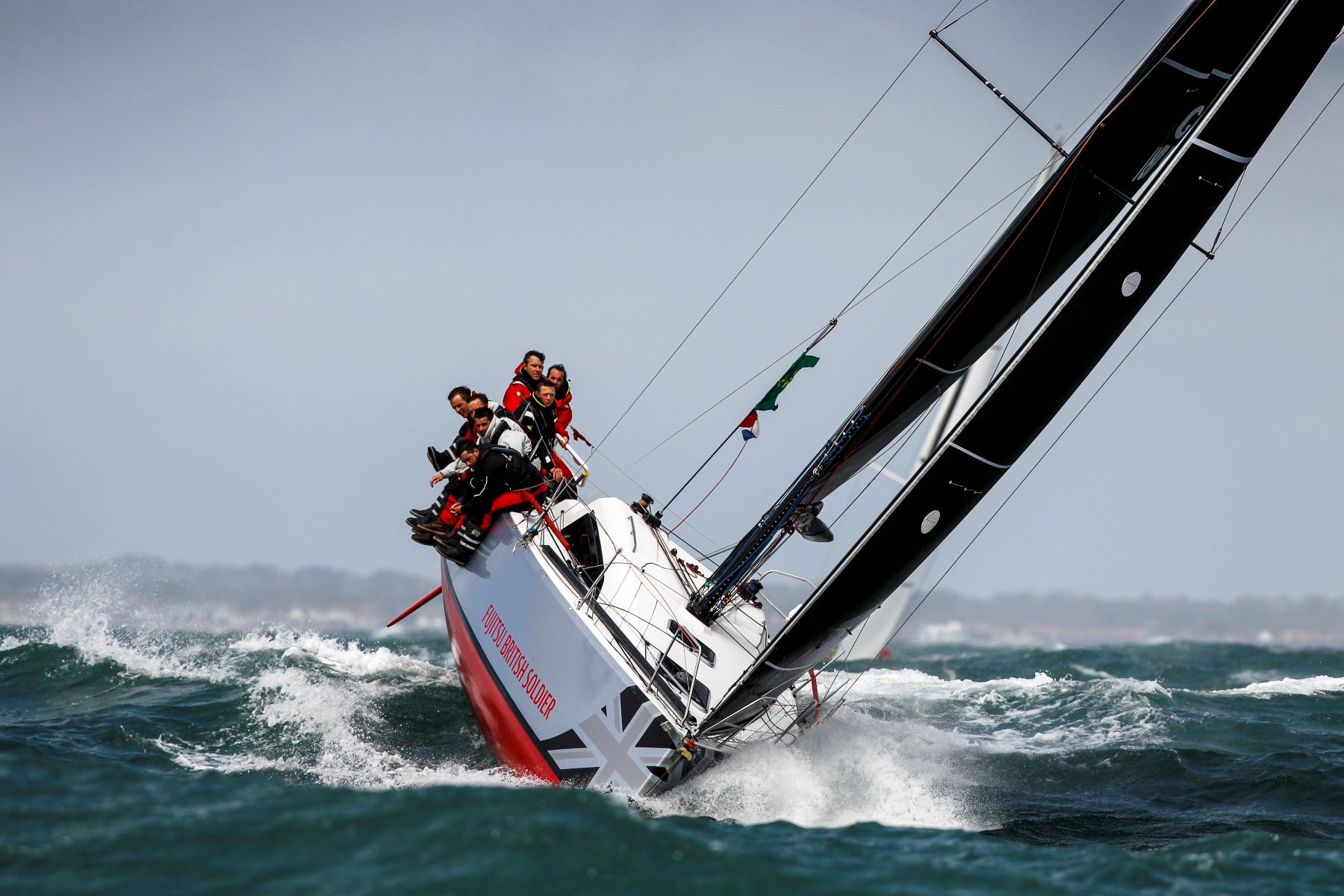 British Soldier’s crew are all serving in the British Armed Forces, and like all of the teams in the Rolex Fastnet Race, have experienced difficult conditions during the first 24 hours. The British Armed Forces have a long and distinguished history in the race. “The Army Leadership Code is founded on our courage, discipline, respect for others, integrity, loyalty and selfless commitment,” commented British Soldier’s afterguard Henry Foster.

The first night at sea was a rough one. Strong winds had been blowing in from the Atlantic for three days with a big swell adding a significant sea state to the strong breeze. In the early hours of Day Two, the inshore and offshore groups converged off Lyme Bay.

At 1000 BST on Day Two: Léon, who had stayed inshore, was estimated to be leading the IRC Three, but only just. British Soldier, who had gone offshore, is less than a mile behind on the water and a few minutes behind on time correction. Another offshore strategist, Hey Jude, is third in class.

70 teams started the Rolex Fastnet Race in IRC Four. As with IRC Three, the tough conditions have resulted in 12 teams retiring or discontinuing racing. The vast majority of the teams racing in IRC Four chose to tack offshore after The Needles. Just after sunset on Day One, a pack of boats tacked back inshore to round Portland Bill. Ludovic Menahes & David le Goff, racing JPK 10.10 Raphael were leading, followed by Francois Charles’ Dehler 36 Sun Hill 3 and Vincent & Jacques Rigalleau’s Sun Fast 3200 Enedis.

At 1000 BST on Day Two: Sun Hill 3 was estimated to be leading the class after IRC time correction. Alain Guelennoc’s X-332 Trading-advices.com is making great speed inshore and moved up to second in the ranking. Raphael chose to tack offshore and is estimated to be in third for the class. 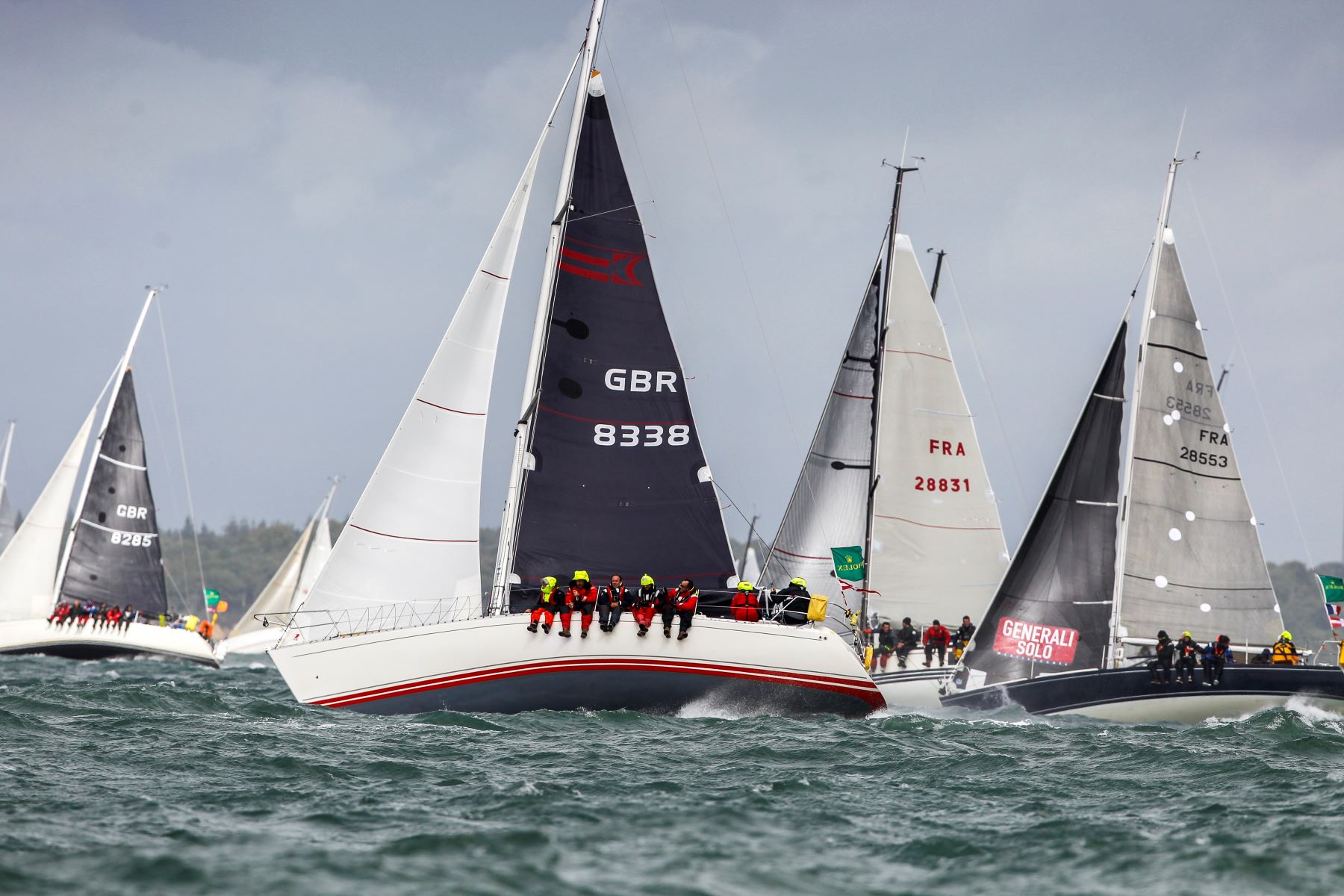 Chris and Vanessa Choules' Sigma 38, With Alacrity, is currently in 5th in IRC Four. © Paul Wyeth/www.pwpictures.com

Chris Choules Sigma 38 With Alacrity, estimated to be fifth in IRC Four, described the race so far.

“Highlights so far; still have 7 crew!  One headsail change, 2 reefs out.  Some oilies have fared better than others.  Slight issue with our new wind vane, part of it flew off down the Solent!  Skippy sad as no data from his instruments so we are doing it old school.  The muscles of Thor (Skippy and Karen) snapped a dynema halyard.  New waterproof cushion covers getting a thumbs up.  The sun is out, we are drying out slowly. “

For the latest positions on all of the boats racing in the Rolex Fastnet Race, visit the YB Tracker https://www.rolexfastnetrace.com/en/2021-tracking-player