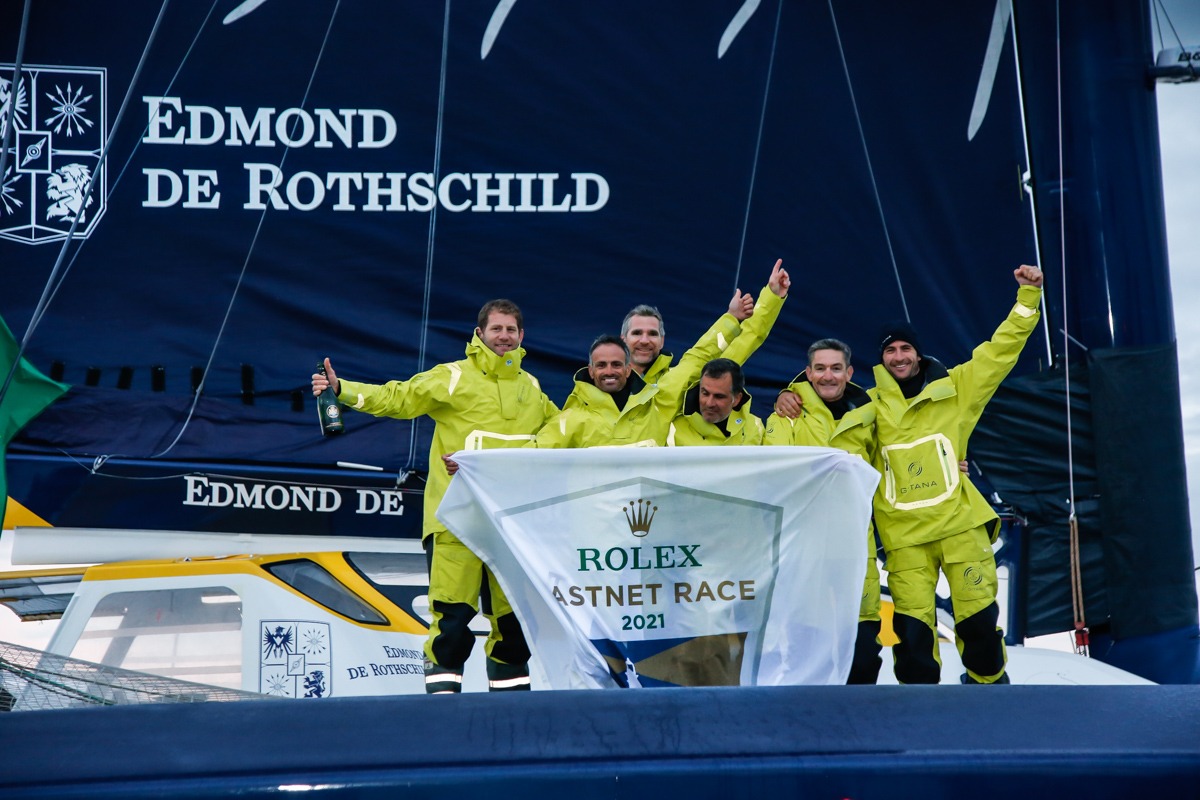 The extraordinary 32m long Ultime Maxi Edmond de Rothschild showed a clean pair of heels to the rest of the fleet in the 49th Rolex Fastnet Race arriving this evening (Monday 9 August) at 20:24:54 BST, setting a new record for the race’s new longer 695 mile course to Cherbourg of 1 days 9 hours 15 minutes and 54 seconds.

As the huge blue and white trimaran arrived in Cherbourg’s Port Chantereyne, the marina was packed with cheering fans of the team and of its famous crew of six led by co-skippers Franck Cammas and Charles Caudrelier. Also on board were David Boileau, Erwan Israel, Morgan Lagraviere and Yann Riou.

“The boat is amazing – we have improved since last year, so we are very happy,” said Caudrelier.  “The team has done a fantastic job over the last year to develop the boat and we can’t stop that because new boats are coming. We are very happy about this race and the result of it, and the way it has happened.”

After an exciting start Maxi Edmond de Rothschild exited the Solent and then led the Rolex Fastnet Race fleet south towards the Channel Islands. Here, significantly, they tacked further south than their main Ultime rivals.

“For us it was important to get south to get the shift,” continues Caudrelier. “It was obvious and we wanted to stay on the left of the fleet. Then we were worried about getting too close to the south of England approaching the Sevenstones [lightship], so we were very happy with what we did. We didn’t make too many mistakes.”

Cammas added: “Charles and Erwan [Israel] did a good job with the routing and we had one good shift by going further south that enabled us to put more than 20 miles on Sodebo and Actual. What was strange was that the French boats went on the south of the Channel and the English boats stayed in the north! Perhaps they are using different routing software!”

With so much of their race upwind, Maxi Edmond de Rothschild hadn’t often hit super-high speeds. However, they had briefly reached 40-41 knots after passing Bishop Rock on their return journey.

With the wind dropping overnight and forecast to be sub-10 knots by tomorrow morning, it is likely that the next Ultimes, Sodebo Ultim 3 and Actual, are likely to lose further ground on Maxi Edmond de Rothschild.

Of their arrival into the Rolex Fastnet Race’s new finish port of Cherbourg, Franck Cammas commented:

“It is good because there is a very good ambiance - maybe a little more than when we finish in England! We are very happy to come back in two years.”

This edition was Cammas’ fourth Rolex Fastnet Race and he is a fan:

“It is a very famous race because it has many boats. It is like the Sydney Hobart - it is not just the professionals, there are many amateur boats too. It is very good to have these all on the same line. It is also very nice to have big multihulls, big monohulls, all the new IMOCAs, etc all on the same start line.” 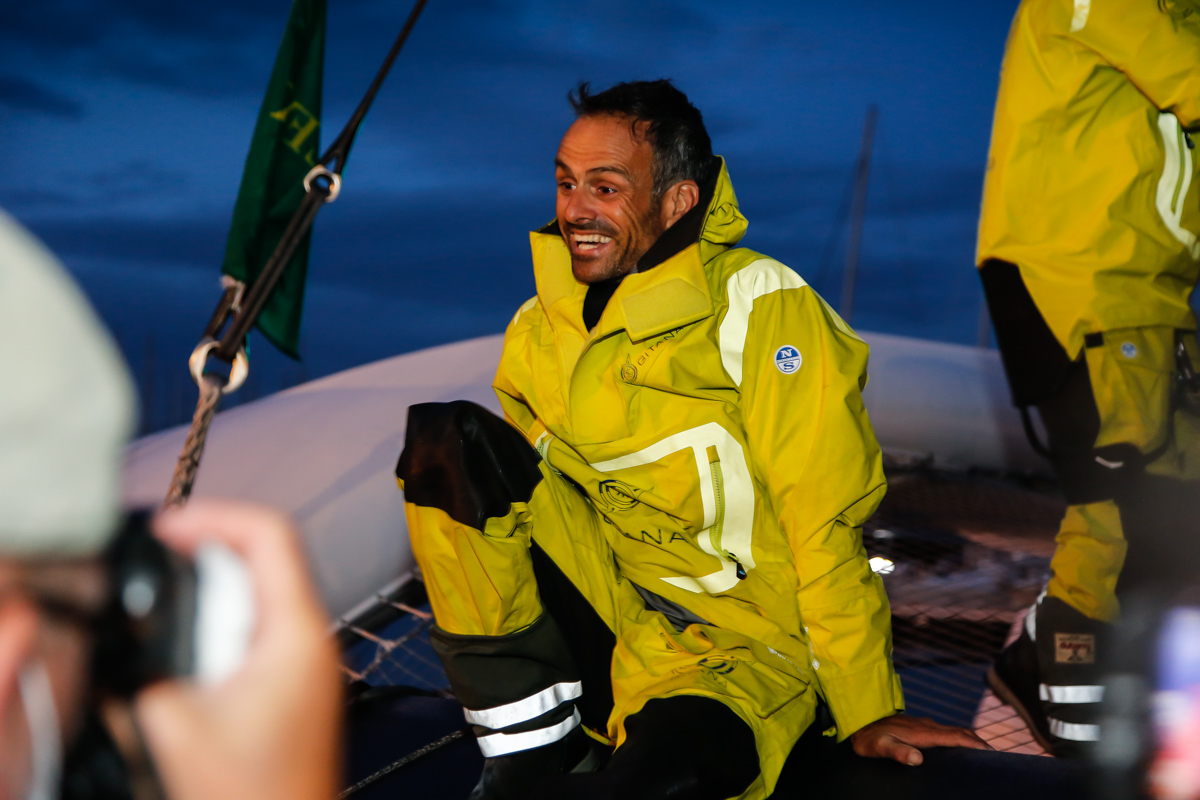 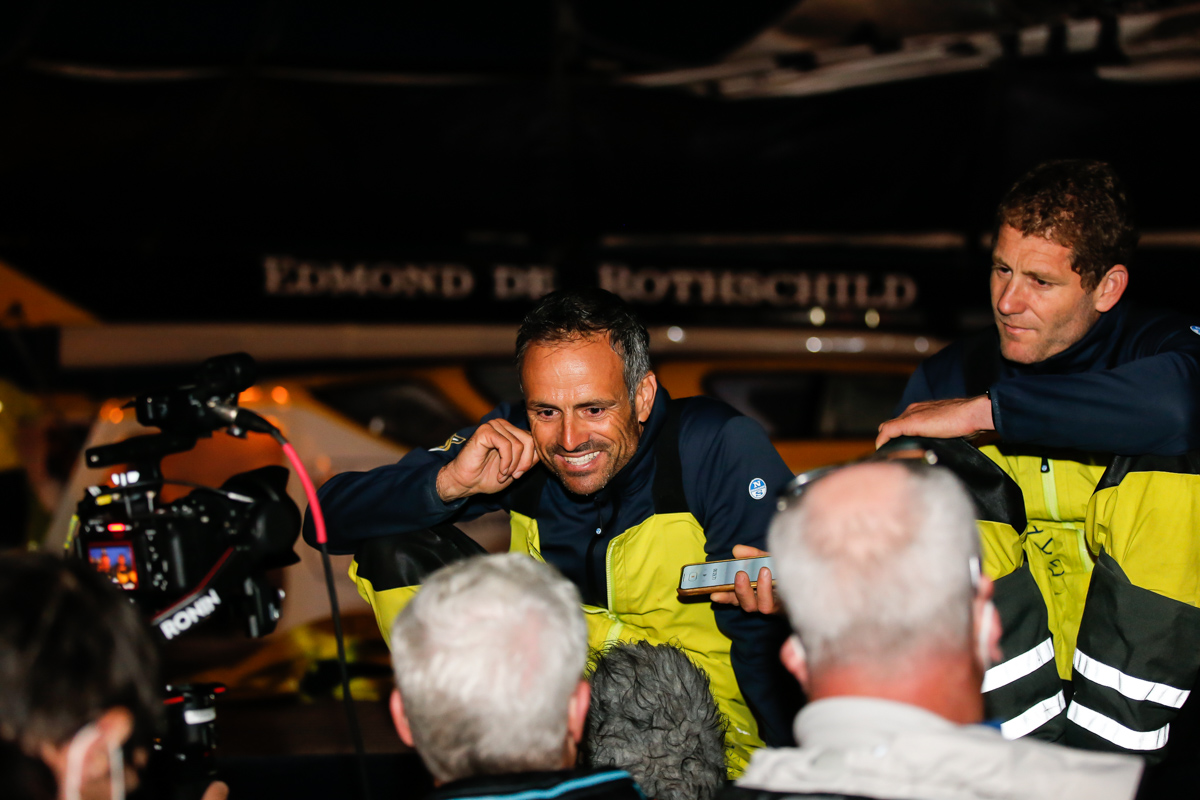