Ino XXX’s Rolex Fastnet Race was a fine example of the long grind, gaining a lead and then building upon it at every opportunity.

“We were really happy that we held on and stayed at the front of our class all the way to the Rock,” recounted Neville. “What’s great about this boat - it’s a reaching boat. We hardly saw a spinnaker, only briefly so it was a bit of a strange one.

“We had one other IRC One boat behind us which was Matador and they sailed really well upwind, but we were able to get away from them on the fetch. We were sailing a lot with Class40s and a couple of 60ft boats in IRC Zero. We were very concerned about the other IRC Ones catching up with us.”

The Cherbourg arrival upped the stress level, when just astern of the lead Class 40s, the wind disappeared just short of the finish line. “That wasn’t much fun,” admitted Neville. “We only really got becalmed after we came around the headland here. Prior to that we kept going all the time and we were lucky that we came in with the tide.”

“That would be amazing,” said Neville of that outcome. “We just have to keep an eye on the tracker. If the wind has died out there, as it has here, it will be quite tough for them. They’ll have a couple of cycles of tide against them. But I am really pleased. The boat has gone really well and the main thing is to do well in your class and if the overall comes, then great…”

This morning however, Tom Kneen’s JPK 11.80 Sunrise, the run-away IRC Two leader, due to finish here in Cherbourg in a few hours seemed to be threatening Ino XXX’s position in the overall rankings.

Finishing just after 0800 hrs BST this morning in IRC One was Pata Negra, the Marc Lombard-designed IRC 46 campaigned by Andrew Hall and his son Sam. “We had a good run, the boat went well for us, although we did blow out two headsails on the way up to the Fastnet Rock,” said Andrew. “Glad we got a good time, we’re meant to be racing at the Welsh IRC Championships tomorrow!” Clearly 695 miles of hard racing and a lack of sleep after four days at sea has done nothing to dim his enthusiasm for more racing up in North Wales at his home club of Pwllheli Yacht Club. 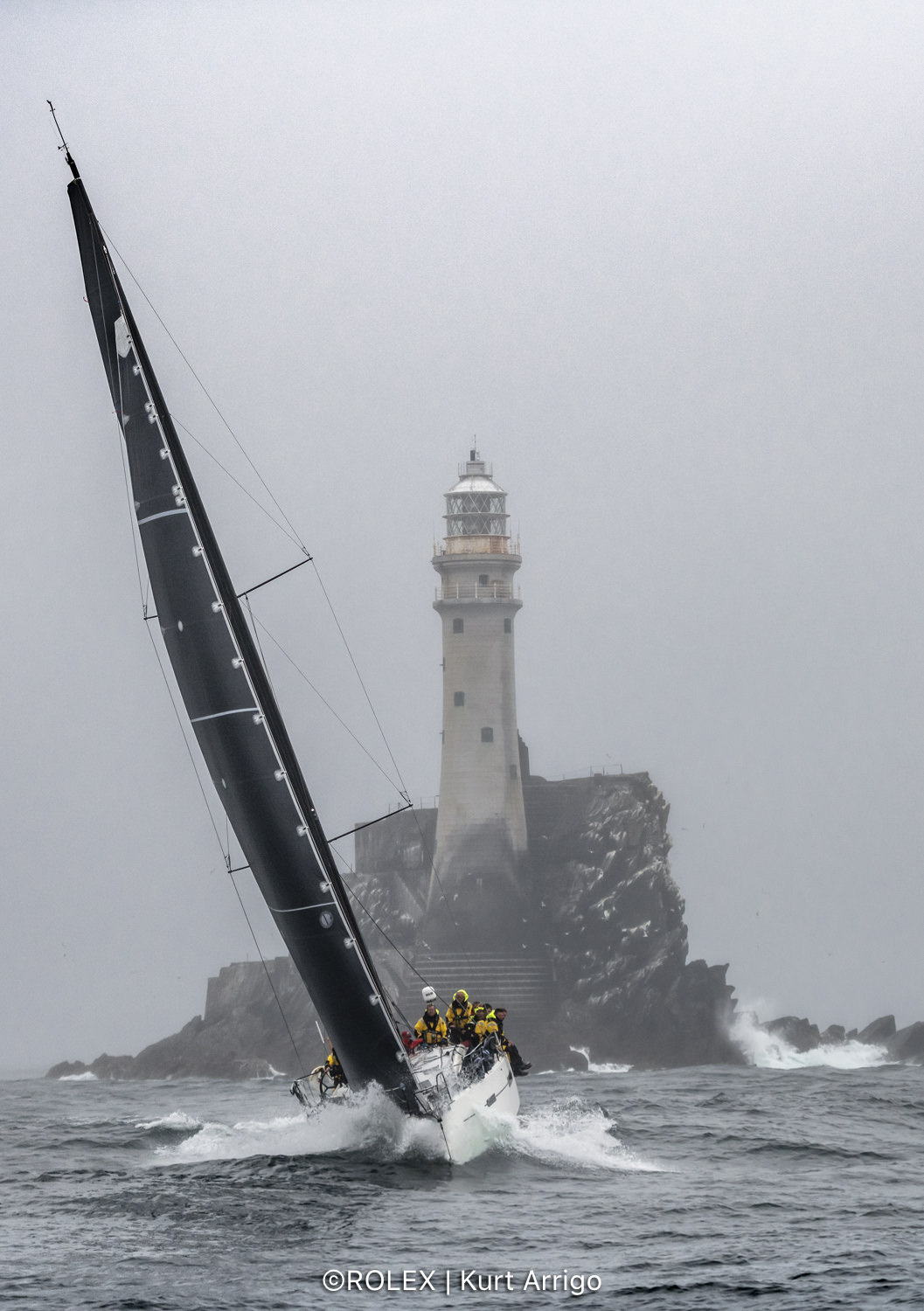 Arriving last night to end up 10 minutes shy of Pata Negra under IRC corrected time was Matador. “The boat has been rock solid, she’s taken us safely through heavy wind and high seas. It’s been a very good race for us,” said owner Jonas Grander.

60 years since Stormvogel took line honours, the 73ft van de Stadt ketch, once campaigned by Dutchman Cornelius Bruynzeel, has finished the 2021 edition of the Rolex Fastnet Race in a very respectable position.

Currently she lies in sixth place on the IRC One standings, and her Kiwi skipper Graeme Henry was rightly proud of the achievement.

“Not bad for a 60 year old boat, it really shows what the boat is capable of,” said Henry, who flew in from New Zealand to put the project together over the months leading up to the race. “Stormvogel has had a lot of work done on her over the last few years, she’s in really great shape and strong.” This was just as well for the stormy start to this race. “We were able to push it hard in those strong southwesterlies we had getting out of the Solent. We were pushing 100%, certainly not nursing the boat because of its age.

“Going around the Fastnet Rock was a very special experience, for Stormvogel, for me, for everyone on board. It was a moment to celebrate, although you can never celebrate too early when you still have half the race to go. It’s been fantastic to finish this race and celebrate the boat’s 60th year in this way.”

Currently six IRC One boats have finished, so there is plenty of battling to be done as the rest of the 48-boat division struggles to get clear of the clutches of the light wind off the coast of Cornwall. With stronger breeze building from the south-west, the final race across The Channel should help propel them towards Cherbourg at last. 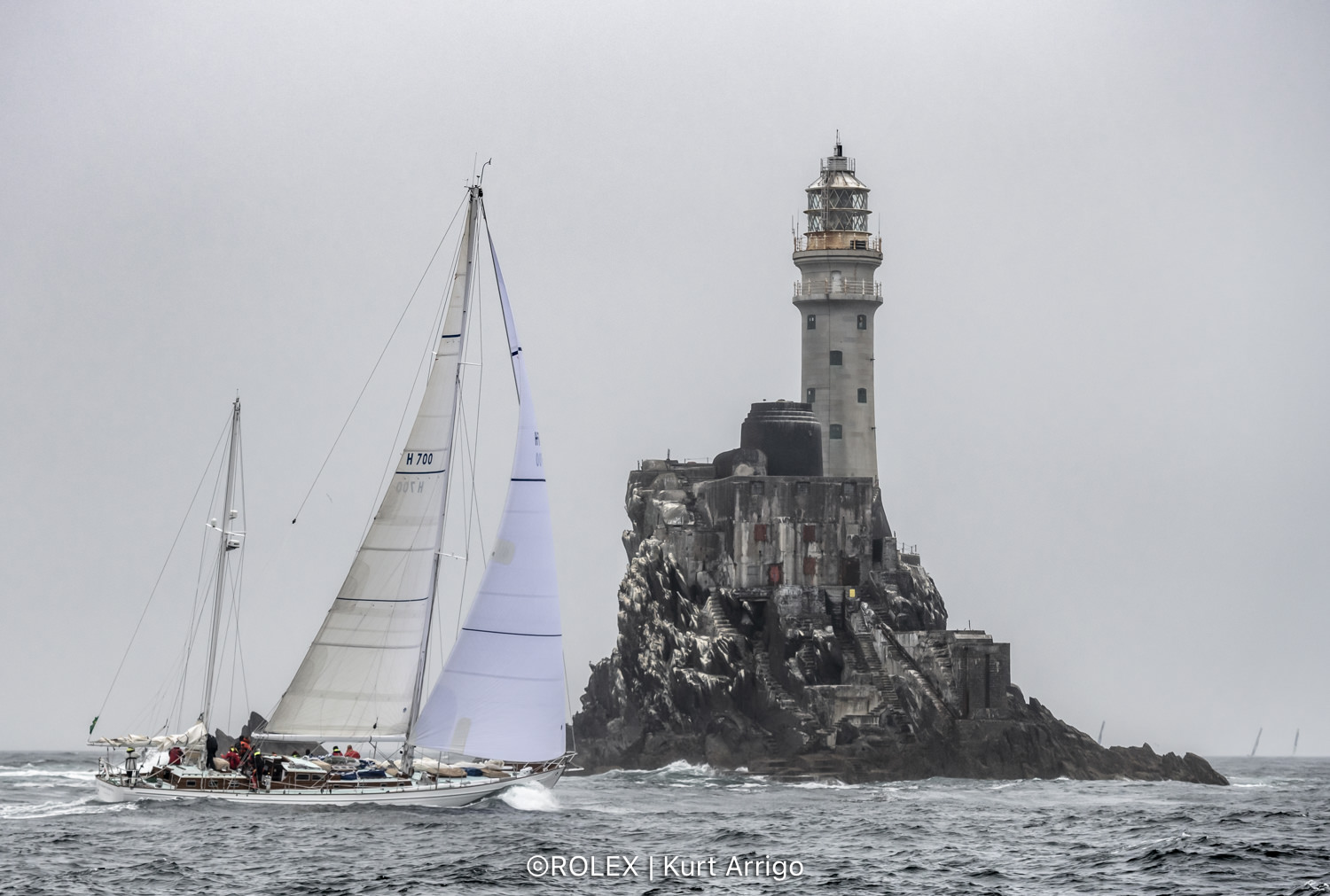 Just ahead of the IRC One leader, there was another nail-biting finish between the Class40s, with the first six crossing the line within the space of an hour after a compression occurred as the wind turned patchy just short of the line. The competition between the massive 35-strong Class40 fleet was intense and featured several lead changes over the course the race.

Axel Trehin’s Max 40 Project Rescue Ocean was the early Class40 leader, having dived furthest south outbound to the Casquet TSS on the first night and then eeking out a small but significant lead playing the shifts and tide between Start Point and the Lizard. However after looking in good shape passing the Lizard, Project Rescue Ocean dismasted in Mounts Bay. This is believed to have been due to their J1 hook breaking after the intense slamming from sailing upwind.

Their retirement enabled Luke Berry’s Lamotte - Module Création to lead up the east side of the Land’s End TSS followed, surprisingly due to his boat’s age, by Italian Andrea Fornaro on the Botin-designed Tales 2. At the Fastnet Rock Lamotte - Module Création held a 20 minute lead but with sheets cracked on the reach back to Bishop Rock the more powerful new scow designs ate this up and en route to Bishop Rock Berry was overtaken by London-based Frenchman Antoine Magre’s Mach 40.4 Palanad 3. 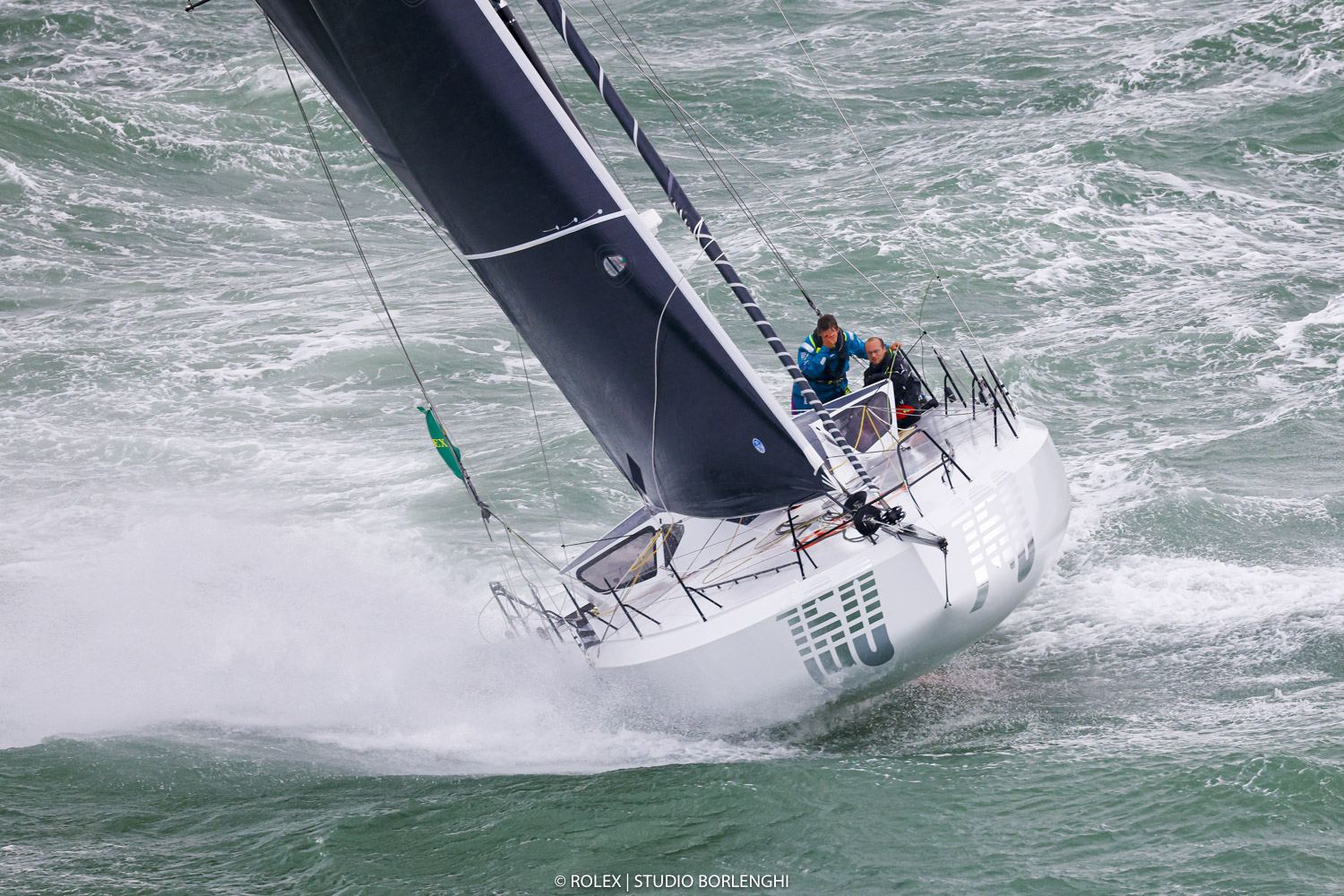 Antoine Magre and the crew of the winning Class40, the Mach 40.4 Palanad 3 © Carlo Borlenghi/Rolex 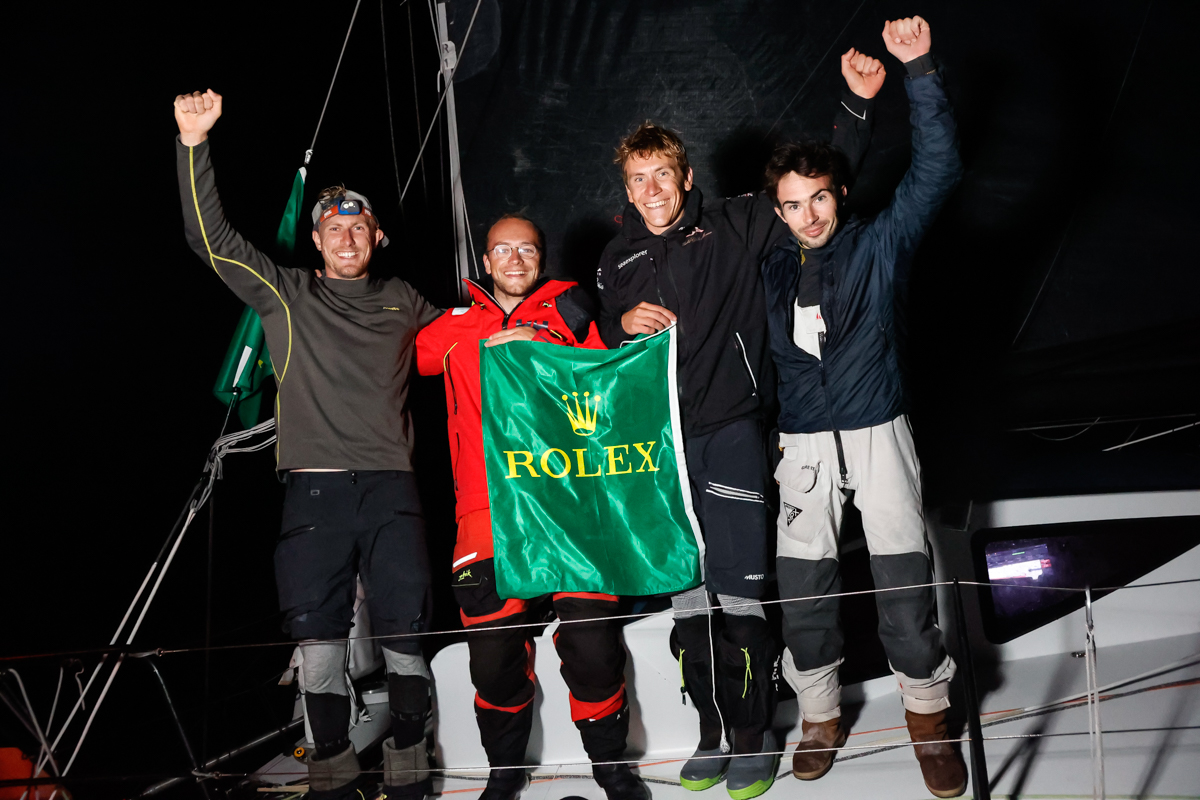 From here Palanad 3 held on to the lead despite a compression to the south of Alderney which could have seen any of the top trio of Class40s edge ahead, followed the wind further shutting down in the early hours north of the Cotentin peninsula.

“The toughest part was approaching Alderney,” recounted Magre. “There was five knots of tide, and because we were earlier than we thought, this tide was still negative for a couple of hours. We could see Luke [Berry] coming back - he was just 200 metres away and we were in for a close finish.”

In the pitch back they had found the small back eddy to the south of Alderney.

“We played that nicely as the other boats were spinning around in circles,” recounted Palanad 3’s British navigator Will Harris. “But then we ran out of that and watched the whole fleet catch up with us. Then we got lucky, picked up the wind first and that was it – we just had to hold on.”

The pain continued for defending Rolex Fastnet Race Class40 champion Luke Berry as he was pipped at the post by Valentin Gautier and Simon Koster’s Banque Du Leman. Earlier in the race, the Swiss Class40 had lost out going west at the Land’s End TSS and had then spent the subsequent Celtic Sea crossings attempting to catch up

“South of Alderney, anyone could have won,” explained Koster. “For the first two boats, there was no wind. With the scow light wind is a challenge, but we have BIG sails for it, like a masthead Code Zero to just get it going. But the gain is so big on the reaching legs – then you are a couple of knots faster than the pointy boats.”

Berry was resigned to his fate aboard his Sam Manuard-designed Mach 40.3, but acknowledging that he is due to get a new boat next year which will make him competitive against the 40.4s.

“Ours is very good downwind but as soon as it is a bit tight they are very fast. Still we’ve finished with two Mach 40.4s ahead and two behind.”