Following the 340 available places in the IRC fleet selling out in just four minutes and 37 seconds when entry opened on 7th January, the Royal Ocean Racing Club, organisers of this, the world’s largest offshore yacht race, has provided a sneak preview of the 2019 line-up.

While the bulk of the fleet remains the IRC entries, competing for both their class titles as well as the overall Fastnet Challenge Cup, 2019 will see an unprecedented entry of ‘non-IRC’ boats, the majority from France. Entered at present are 25 Class40s (plus two more in the IRC fleet). There are also set to be a handful of Ultimes. At 100ft long, these maxi trimarans are the world’s largest and fastest offshore race boats. The present race record for the Rolex Fastnet Race was set in 2011 by the 130ft trimaran Banque Populaire V, skippered by Loïck Peyron, in a time of 32 hours 48 minutes at an average speed of 18.5 knots. While shorter, any of the new generation Ultimes is capable of bettering this time.

Most staggering are the number of IMOCA 60s entered – 27 of them, making this one of the largest gatherings of these thoroughbred ocean racers outside of the race for which they are principally built - the Vendée Globe singlehanded non-stop round the world race. IMOCA 60s have been in the news in recent months as they are one of the classes set to be used for the next running of The Ocean Race (ex-Volvo Ocean Race) over 2021-22. The Rolex Fastnet Race line-up includes an unusually large number of British female skippers taking part, among them Initiatives Coeur’s Sam Davies and former Mini and Class40 sailor Pip Hare. 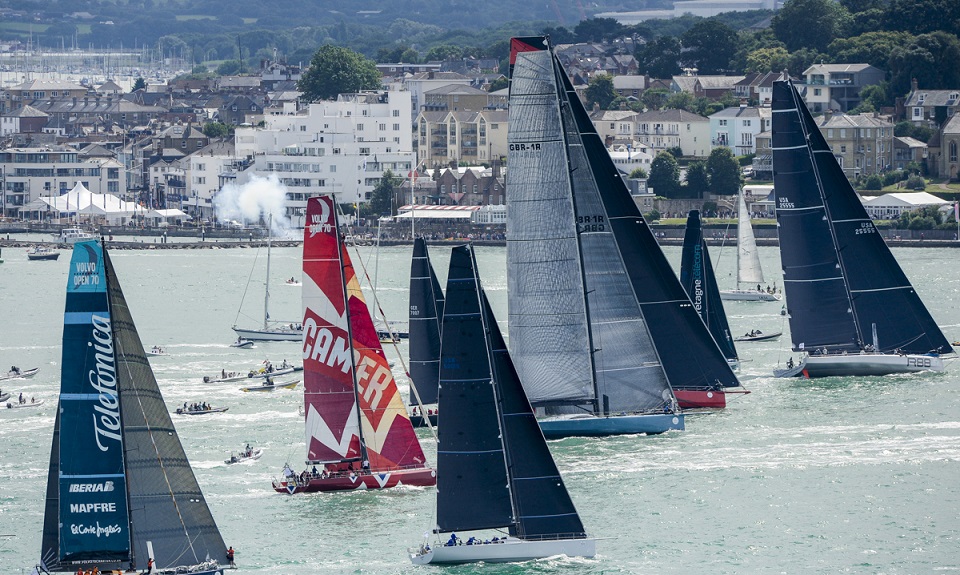 The international fleet is highly diverse, with boats ranging in size from 9m to 32m and a start sequence taking place over a 1hr 40min period off Cowes from the Royal Yacht Squadron line © Rolex/Kurt Arrigo

In sheer numbers the IRC fleet should once again be huge. At present the maximum entries has been comfortably exceeded although the exact number making it to the start will fluctuate due to circumstances, not least the requirement to comply with the RORC’s race qualification requirements.

In the fight for monohull line honours, leading the charge should be the Hong Kong entry, Scallywag 100, skippered by David Witt (from the team that competed in the last Volvo Ocean Race). But she will face stiff competition from the highly refined Rambler 88 of American George David, the Fastnet Race’s 2017 monohull line honours winner, and Ludde Ingvall’s CQS.

Among the fleet are many past winners. This includes the reigning Rolex Fastnet Race champion, Didier Gaudoux, who returns with his faithful JND 39 Lann Ael 2. Conversely, returning with yet another new boat is 2015 winner and race veteran Géry Trentesaux, back this time on the bigger version of his victorious Courrier Du Leon, the JPK 11.80 Courrier Recommande. Given that French boats have won the last three editions of the Rolex Fastnet Race outright, it is no surprise that after the UK, French boats are second largest entry this year – with 58 in the IRC fleet, plus an additional 35 or so in the non-IRC classes.

At present class splits are a long way off being decided, but it is these classes themselves, and not the overall prize, that provide the most serious competition within the Rolex Fastnet Race. However already identifiable are groups of similar boats, due to have exceptional competition on the biennial 605 mile race from Cowes to Plymouth via the Fastnet Rock. 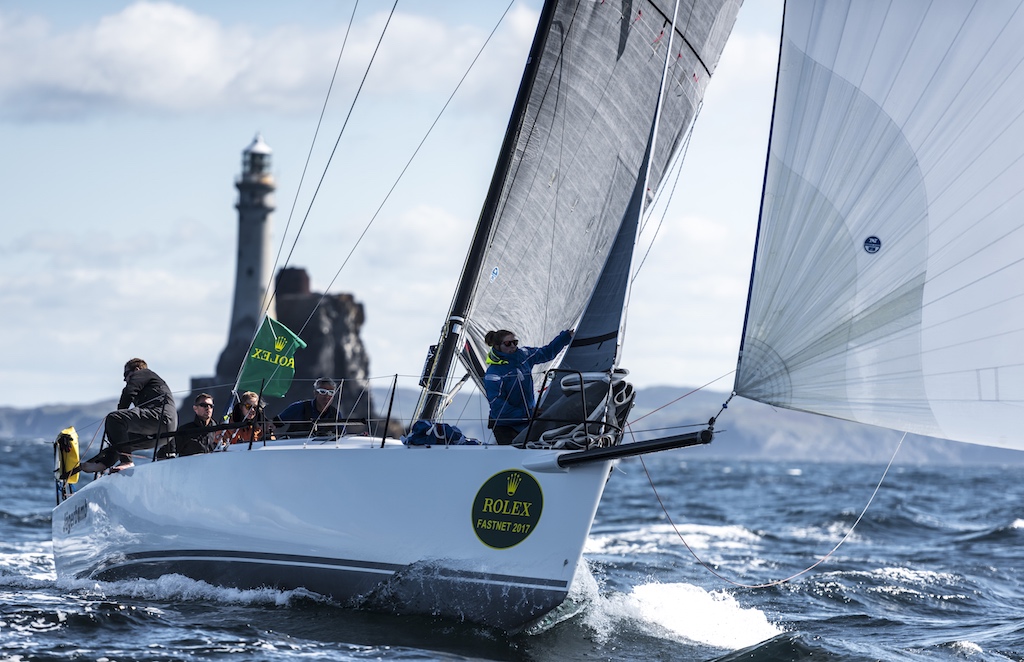 The symbol of the race is the Fastnet Rock, located off the southern coast of Ireland. Also known as the Teardrop of Ireland, the Rock marks an evocative turning point in the challenging race © Rolex/Kurt Arrigo

Before France’s domination of the race, the race was twice won (in 2009 and 2011) by Niklas Zennström’s Rán II. Mini Maxis and Maxi 72s are well represented again this year with Rán II back as Peter Harrison’s Sorcha. She will be up against Bryon Ehrhart's Lucky (formerly the Rolex Maxi 72 World Champion Bella Mente) and Sir Peter Ogden's elongated former Maxi 72 Jethou.

Ex-Volvo Ocean Race boats are well represented in six VO70s, including David and Peter Askew's Wizard, winner of this year's RORC Caribbean 600 and Johannes Schwarz' Green Dragon and E1, while there are two VO65s including Team Brunel. Former Brunel Synergy skipper from the 1996-97 round the world race, Hans Bouscholte, is sailing Boudragon, previously Lawrie Smith's Silk Cut - one of five VO60s taking part.

Perhaps the most intense battle in the IRC fleet will be between the seven Cookson 50s, including the fastest - American Ron O’Hanley’s Privateer. One example, Ger O'Rourke’s Chieftain, claimed the Rolex Fastnet Race outright in 2007. Also to be watched in this size range are the TP52s - Outsider, Tala and Rockall V plus Frenchman Eric de Turckheim's Nivelt-Muratet 54 Teasing Machine, winner of the 2017 RORC Transatlantic Race. The previous Teasing Machine, de Turckheim’s Commodores’ Cup-winning A13, is also competing now as Mark Emerson’s Phosphorus II. 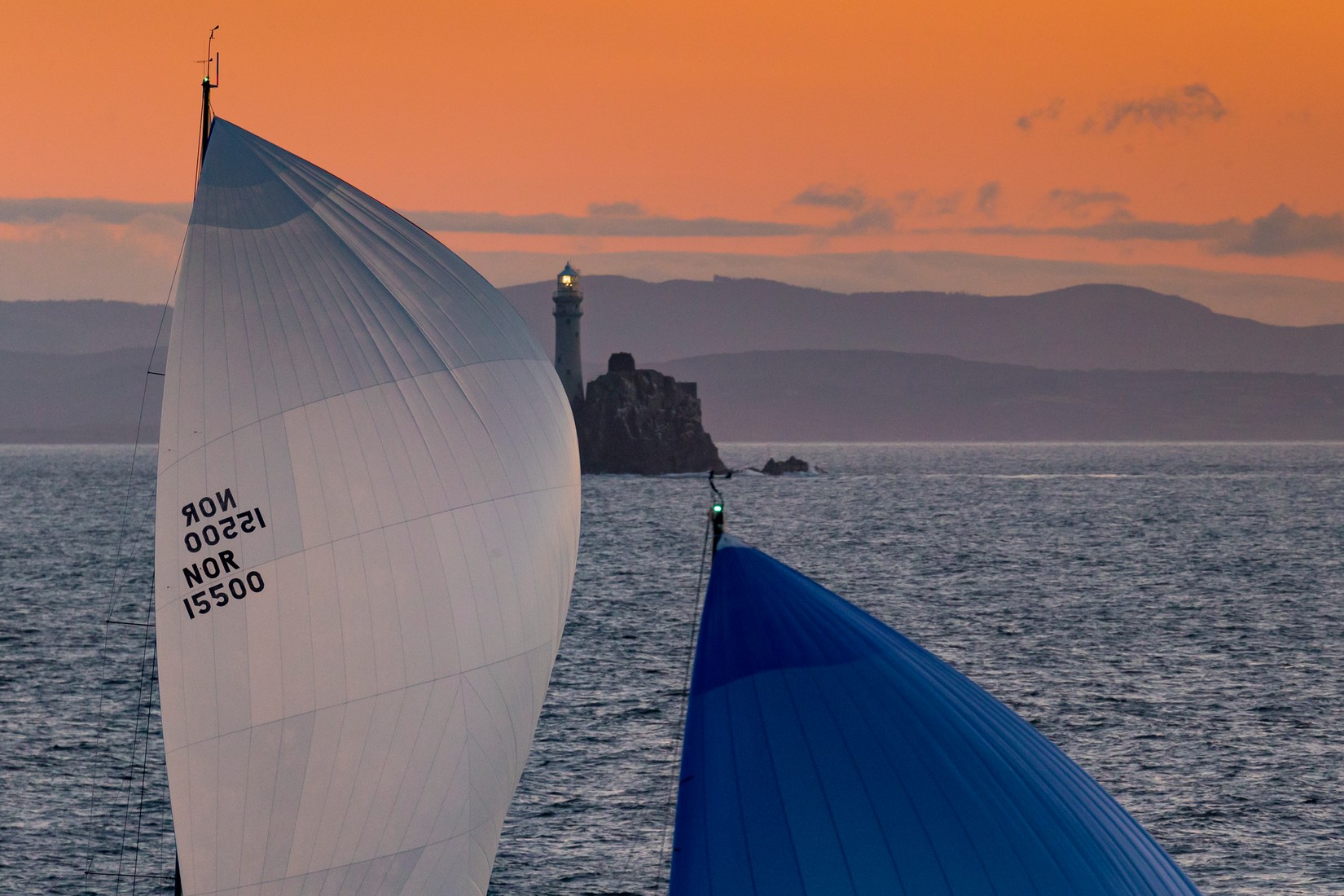 Once sailors reach the Fastnet Rock, they are well over halfway to the finish in Plymouth © Rolex/Carlo Borlenghi

Beneteau is also well represented with thirteen First 40s set to be on the start line and an additional eight First 40.7s. However all eyes will be on the latest hardware from St Gilles Croix de Vie - the Figaro 3s, complete with their IMOCA 60-style foil packages. Three examples are entered including the Will Harris-skippered Hive Energy and from Ireland, Conor Fogerty’s Raw.

Similarly, following their victories in the 2013 and 2015 races, there will be a strong JPK turn-out, including nine 10.10s (similar to the Pascal and Alexis Loisin’s 2013 victor Night & Day) and five 10.80s (like Trentesaux’s Courrier Du Leon).

The smallest boat race in this year’s event will be between the trio of Contessa 32s, including Assent, campaigned by Simon Rogers of the Lymington-based Rogers clan that spawned the classic range.

A more complete pantheon of offshore race boats, you would be hard pressed to find anywhere, ever.