Bumpy ride to the Rock 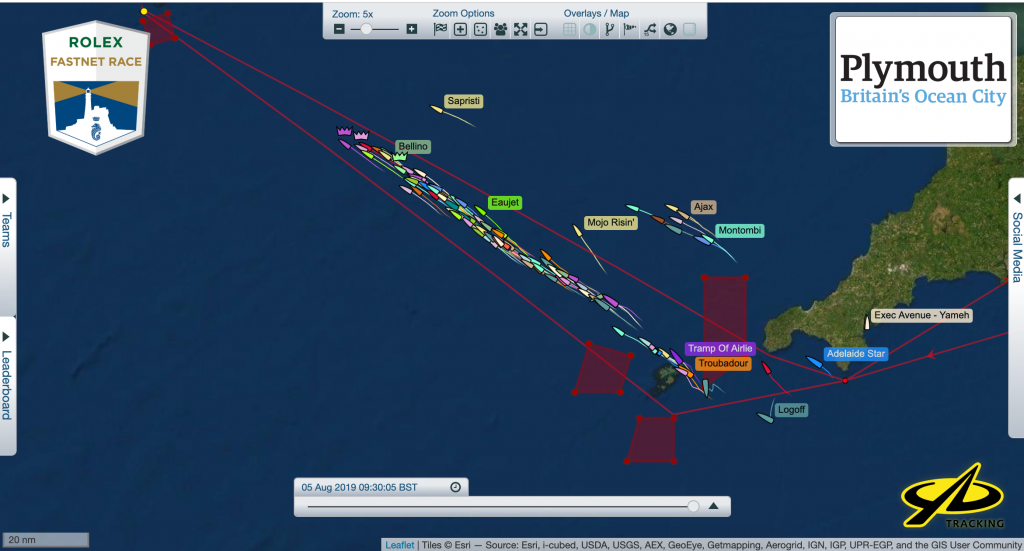 The vast majority of the Rolex Fastnet Race armada racing in IRC Three and IRC Four passed the Isles of Scilly on the second night of the race. As they enter the Celtic Sea they are in for a bumpy ride.

120 nautical miles northwest of the last outpost of the British Isles lies the Fastnet Rock Lighthouse. Conditions in the legendary race have changed, with 25 knots of wind plus reported from the Celtic Sea. What is more, the breeze has increased and veered west. For the fleet heading towards the top of the course, it will be a fetch at best, but more likely a bumpy beat.

Louis-Marie Dussere reported that they had enjoyed a fast passage to the Isles of Scilly, screeching along under the Code Zero. (Audio en francais). Meanwhile Deb Fish, racing doublehanded with Rob Craigie, has been up the rig on their Sun Fast 3600 Bellino to fix a batten which was damaging the main sail.

“I sit shaking at the chart table. Just recovering from a trip up the mast,” commented Deb Fish. “A tricky job high up above the deck in a 25 knot little squall with the light fading. Trying to catch Black Sheep who were boat lengths away when we passed the corner of the TSS- close enough to exchange a cheery wave.”

A pack of boats have chosen to take the northerly route into the Celtic Sea. In IRC Four this group is led by Marcus Wareham's First 34.7 Polka while in IRC Three, Sun Fast 3300 Sapristi, skippered by Alexandre Ozon, has also chosen to stay north of the rhumb line. Alexandre Ozon took line honours in the 2018 Transquadra Race.

As of 0700BST Monday 5 August the following teams have retired from the Rolex Fastnet Race.