Doublehanded leaders round the Fastnet Rock 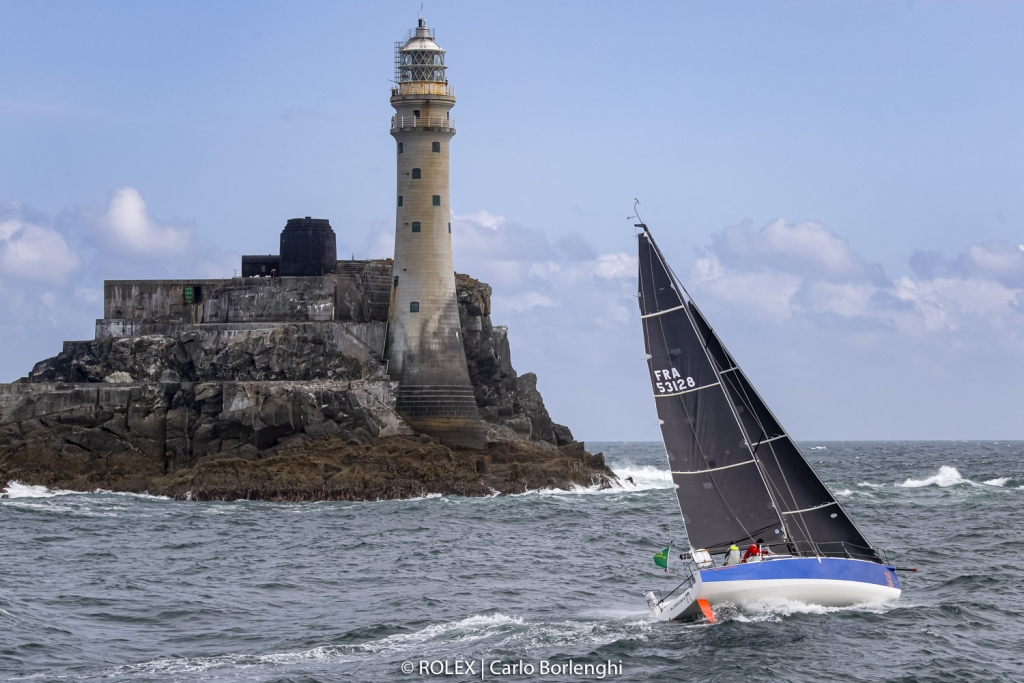 Two-handed class leader at the Rock, JPK 10.30 Léon is skippered by Alexis Loison - 2013 winner of the 2013 Fastnet Challenge Cup and Jean-Pierre Kelbert of JPK - maker of the boat © Carlo Borlenghi/Rolex

The Dutch dynamic duo were followed by three teams which, after IRC time correction, form the podium for the Two-Handed class at the Fastnet Rock: LÉon, Fastrak XII, and Raging-bee². Below is what the three leading teams had to say as they rounded the iconic lighthouse at the top of the course.

JPK 10.30 Léon, raced doublehanded by Jean-Pierre Kelbert & Alexis Loison, rounded the Fastnet Rock 38 minutes after Ajeto! Léon was estimated to be in pole position for the Two-Handed class by about an hour after time correction. They comment:

“Léon has been very fast. We are happy that last night we were faster than Henry (Bomby) and Hannah (Diamond) on Fastrak and Louis-Marie (Dusserre) on Raging Bee. We are expecting a fast reach to the finish, maybe 110º wind angle and more than 30 knots of wind. Hopefully we will finish the race in about 24 hours (approx. 1700 Tuesday 06 August).”

“We have about 22 knots of wind approaching the rock, and we are jib reaching at about 65º,” commented Hannah Diamond. “The sea state has been really bad since we left the Isles of Scilly, and it is really awful as we approach the Fastnet Rock.  We are really looking forward to turning around and heading back towards the finish. We are having a great battle with Raging Bee - to have close competition means we cannot afford to drop our guard for one minute, and we will be pushing hard to the finish.”

“The leg through the Celtic Sea was very long but we have had no issues with the boat,” commented Dussere. “Léon is going very fast, and so is Fastrak with their water ballast advantage. After rounding the Fastnet Rock, I think they will be faster than us but they are professionals.  At the moment we are the first amateurs!”

At 1900 BST on Monday 05 August, 13 teams racing in the Two-Handed class had officially retired from the 2019 Rolex Fastnet Race.