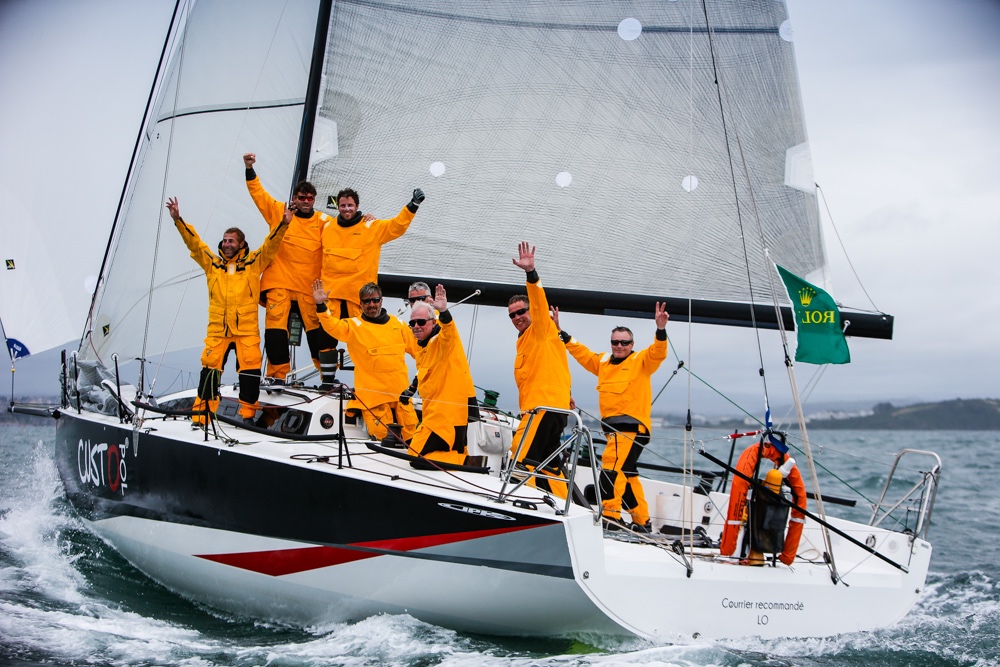 Fastnet legend Géry Trentesaux and his experienced crew on Courrier Recommandé celebrate another successful race in which they have secured another class win © Paul Wyeth/www.pwpictures.com

The JPK 11.80 Courrier Recommandé arrived at 11:23:50 this morning, another barnstorming performance by the Fastnet magician Géry Trentesaux. Time and again the Frenchman has proven that he understands this race perhaps better than any other as he rounds off his high-level racing career with almost certain victory in IRC Two.

He won’t be emulating his overall race victory from 2015 but Trentesaux has no regrets:

“The aim was to win the class, but to win overall is the cherry on the cake. We like this race, it’s probably the best race in Europe. This was my 15th Fastnet and I sailed my first one when I was 18. But this was my last race probably, my last Fastnet with the crew because we are an old crew now. We began with this crew for the Fastnet 1999. We are too old to be competitive any more. We are not fast enough sometimes, although we have some young crew with us. It's a hard sport, not a sport for old men.”

Trentesaux was satisfied with his strategy and his crew’s decision-making and boat-handling in some very challenging conditions:

“We didn't make a mistake, we had a good start, we were in the right place for the wind. Probably we made some small mistakes, but only half-mile mistakes, not the race. We are not so fast reaching up to the Fastnet because we had no Code 0. Lann Ael 2 and L'Ange De Milon are faster than us on that point of sail.”

Although, it should be said that those two boats are competing in IRC One, so they weren’t direct competitors. However, it has always been the Trentesaux trademark to be keeping up with the class above, holding on to the boats which theoretically should be faster. Asked what is his winning formula, Trentesaux grins:

So, with that in mind, is this really his last assault on the Fastnet Rock? “If I sail the Fastnet again, maybe it will be a cruising Fastnet, a race with my grandchildren.”

Second across the finish line in IRC Two was Tom Kneen’s sistership to Trentesaux’s JPK 11.80, Sunrise. Kneen makes no secret of wanting to emulate the Frenchman’s success in the Rolex Fastnet Race. Having completed his third successive edition of the race after only taking up offshore racing five years ago, Kneen is improving quickly but acknowledged that Trentesaux remains the undisputed master.

“At the start of the race we kept up with him, but when it went light, we knew he’d get away because Géry’s so much better than us in that stuff. We were chasing him around the race course after that.”

Kneen, Plymouth born and bred, will be back in two years, vowing to learn and come back stronger.

“With such a new boat and a new crew, we put up a good fight, Géry is probably almost twice my age. We’ll be back in 2021, provided the race finishes in Plymouth. That’s one of the reasons why we do this race.”

Aged only 35, Kneen is nevertheless one of the oldest on his crew.

“Trying to keep a bunch of twenty-somethings on the straight and narrow - it’s much harder work than I ever expected it to be,” he laughs. “But a good team builds on success. If you bring a group of people together, provided everyone functions properly, then good things happen. Meanwhile, congratulations to Géry Trentesaux for another amazing performance. The man is a legend.”