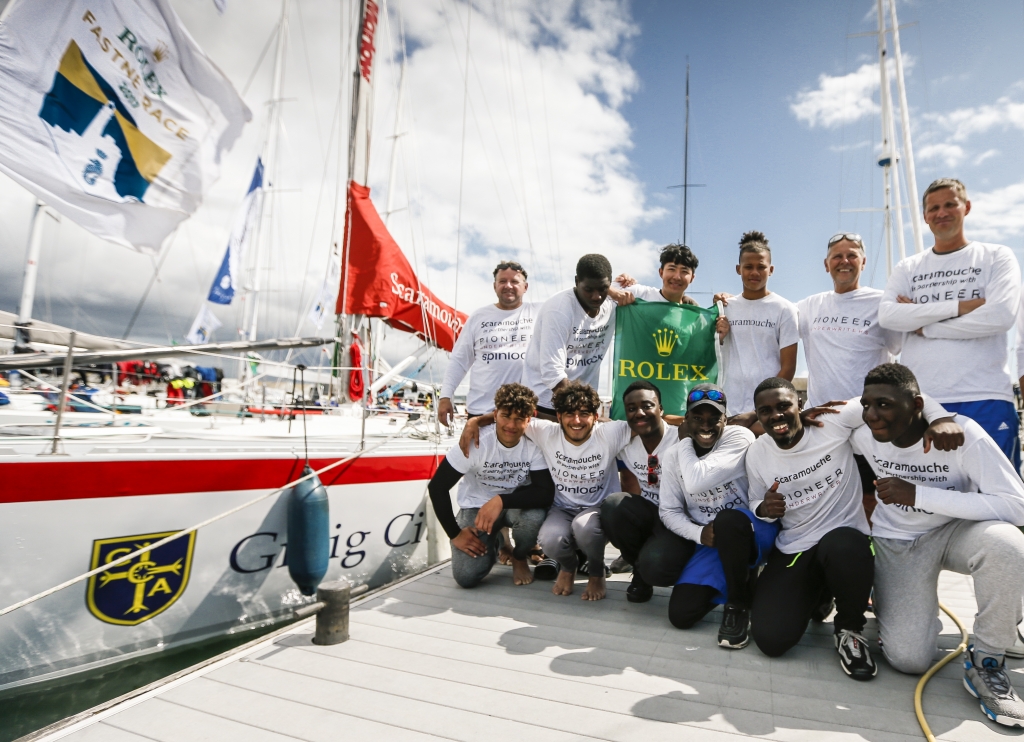 Kai Hockley, aged 13 along with Jaden Owusu and Christopher-Joel Fredrick, both aged 14, are not just the youngest crew taking part in the 2019 Rolex Fastnet Race but they have also undertaken one of the most intense programmes to prepare for the event. Along with six other 18-and-unders, they have worked exceptionally hard to be ready to crew an ex-Admiral’s Cupper Scaramouche, built in 1981, in this, the toughest of races.

Kai has a sharp sense of humour. When questioned about a photo captured during the race showing a seemingly glum expression on his face he swiftly retorted “I was just concentrating hard on sailing.” He went on to say “The first two nights were tiring but in the end we got quite a lot of sleep.” Like the rest of the team Kai had put in a lot of preparation.  “We did the Myth of Malham Race and the St Malo Race (both RORC qualifiers).  I also sail Lasers and 420s, and my goal is to do the Olympics.” 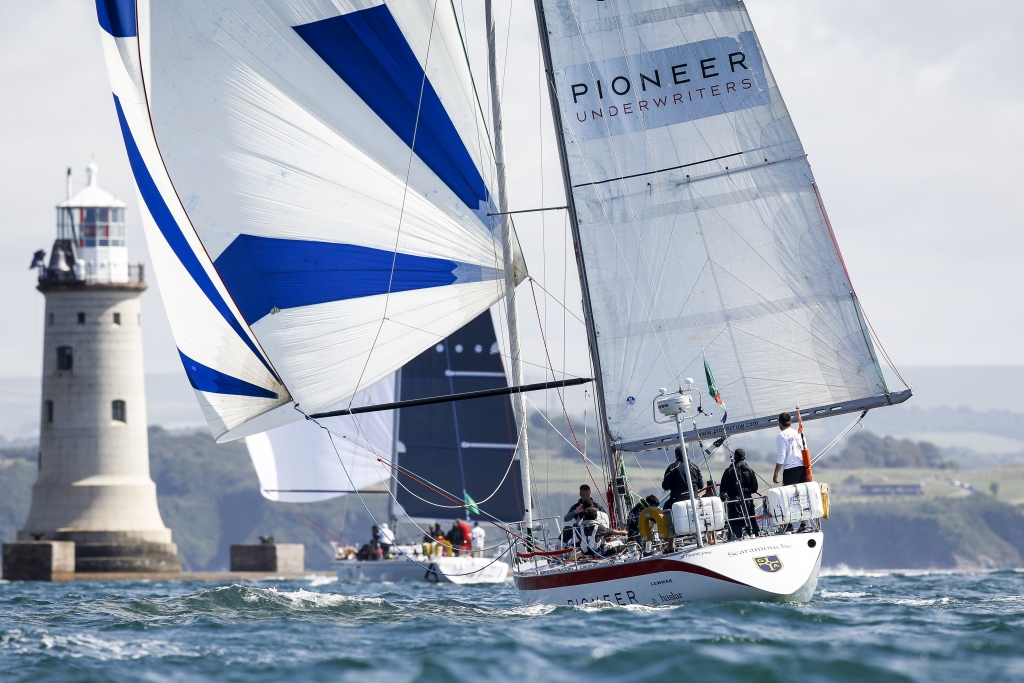 Scaramouche approaches the breakwater at the finish of the Rolex Fastnet Race © Paul Wyeth/www.pwpictures.com

This is Scaramouche’s second Fastnet campaign by a crew from the Greig City Academy which runs the sailing project for these inner London students.  The first, two years ago, was equally successful and a triumph for a previous group of youngsters from the Academy.

While skipper Jon Holt, who is a teacher at the academy, keeps an eye on life on board it is actually the young team that run the boat with minimum input, the oldest of whom, like Captain Azat Ulutas, are aged 18.  “The race was very challenging going up to the rock, and we didn’t eat much!” he says.  “To be honest it was a bit unpleasant.  But coming back was just awesome!”  Asked how he came to be selected as Captain of the young team he suggests “I guess I know how the boat works… I love being Captain.”

The other young crew are: Victor Emovu aged 17, and Seun Williams, Samuel Oladele, Nada Soltan and Alex Bouchereau, all aged 18. “This has been a great opportunity”, says Seun, “especially going around the Rock.  That was a great feeling.”

It’s the second Fastnet Race for Nada, who finished the race as part of the Scaramouche team two years ago when he was just 16.  He looks a lot more mature than his 18 years.  “I enjoyed it so much, I had to come and do it again!” he joked, although it was clear he meant it from the heart.  “I learnt so much on the first race, learning from the older crew, and now I’m passing on what I’ve learnt to the younger ones.” What’s next? “I want to do more sailing on bigger boats. The Fastnet isn’t something you can finish on!” 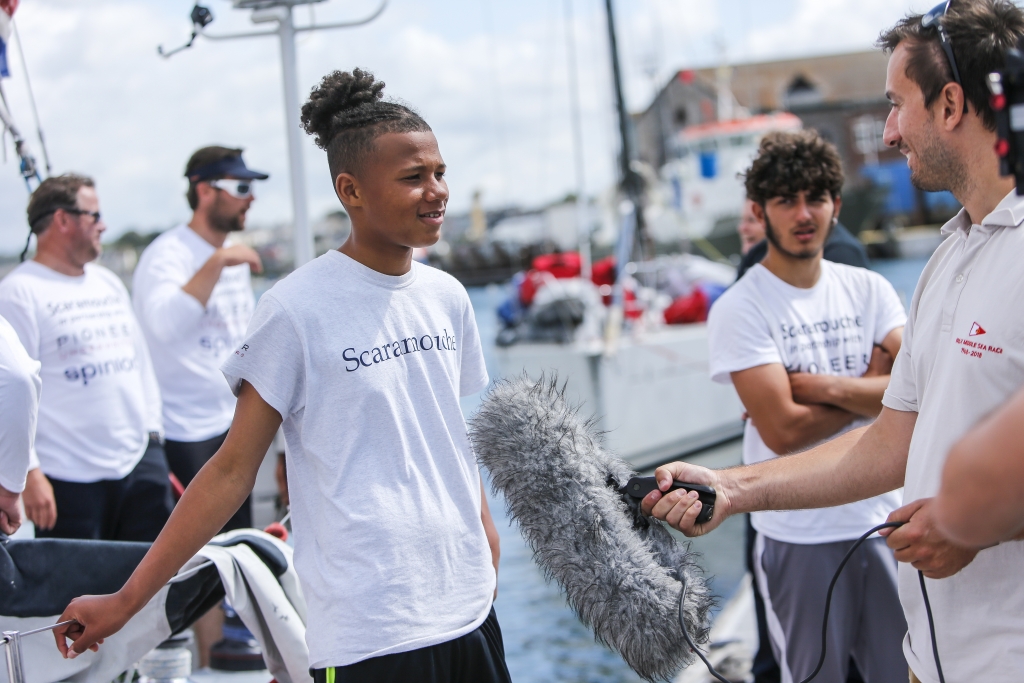 Scaramouche crew being interviewed after the finish of the 2019 Rolex Fastnet Race © Paul Wyeth/www.pwpictures.com

While the boat is based in Gosport, the young team all live in London and Greig City Academy's campaigns in 2017 and 2019 mean it can claim to be the first ever state school to compete in back to back Fastnet Races.

The 2019 crew has some big boots to fill. The 2017 crew went onto receive the Musto Media Prize in the Rolex Fastnet Race 2017, the RYA Award for Endeavour and helmsman Montel Fagan-Jordan won the Young Sailor of the Year and started a job with Alex Thomson Racing. Camilo Orobio went on to sail with many racing teams including RedShift.

Jon Holt summed up “The younger ones (the 2019 team) were very inspired by the older ones, and a lot of our other kids were desperate to come on this race.  It was hard not to include them all.”  Comparing the two events, he notes “The crew were much younger on this event and the conditions were more challenging, but they coped really well.”

The crew has already restored an Eboat and if they can get back to Cowes without being held back by the high winds that are expected this coming weekend they will be taking part in Cowes Week.

The reasons why sailors view the Fastnet as the greatest offshore race is not lost on these young teens. Azat sums up “My best moment was when we were doing 15 knots in the dark, and we couldn’t see where we were going.  That was my real highlight of the race!”