The lowest-rated boat in the fleet finishes: Dolphins, sea sickness and a very long anchor line 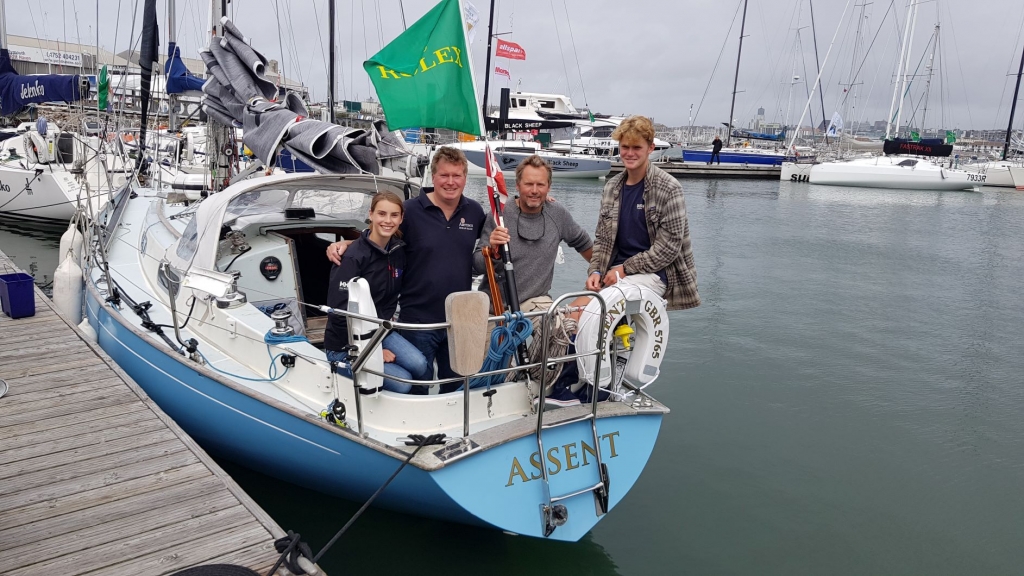 After five days and 15 hours at sea the lowest rated yacht of the 388 starters in the Rolex Fastnet Race finally finished the race in darkness in the small hours of Friday morning.

Despite looking tired, in dripping wet oilskins, lifejackets and harnesses, the crew of Assent, the 47-year-old Contessa 32, pulled into Plymouth with smiles of relief and elation on the faces of brothers Simon and Kit Rogers, Simon’s daughter Hattie and Kit’s son Jonah.

Assent was in a race against time to finish before tonight’s gale arrived, but for them it was not about results.

“We knew that we were going to finish a long time after the main fleet,” says Simon, “but it wasn’t about trying to get a result, it was about finishing and having a fun family experience.

"It was also a bit of a pilgrimage for us.  We have a lot of memories of the 1979 Fastnet 40 years ago.” In that tragic race Assent had been the only boat in Class Four to finish. Simon continued: “In addition we were celebrating the life of Assent’s previous owner Willy Ker who has just died, aged 85 - his funeral was yesterday.  He would have been with us in spirit.”

Willy Ker had cruised the 32 footer afar afield as Antarctica and Greenland over a 25 year period, before finally handing the boat over Kit and wife Jessie Rogers six years ago.

Overnight Assent had approached the finish in wind speeds of over 35 knots, ending their race at the Plymouth breakwater with just one third of their rolling furling headsail and no main.  “We knew by this time that we just had to finish safely,” said Simon.

The finish was the culmination of a long race with an enormous variation of conditions.  As a small yacht encountering big tides, the crew had to make sure they had plenty of anchor line before setting off.  “We knew we could get caught at the tidal gates and risk going backwards” said Simon.

Indeed Assent was to anchor in Lyme Bay during the outward leg and again in a lull on Wednesday night east of the Scillies for a full 11 hours before the new breeze filled in. This enforced rest period wasn’t completely unwelcomed.

“We had spent three really hard days heading upwind to the rock, taking a real pounding” said Simon.  “After the rounding we were very tired, and knowing there was a big depression coming in we throttled back for a few hours to get our energy back, sailing under headsail.  Then we finally put the kite up before hitting the calm and an incredibly glassy sea.

Describing their routing plan he says “Being a slow boat we generally stuck to the rhumb line.”

“This was the first offshore race I have ever done,” she said. “We had highs and lows but watching a huge school of dolphins and the night phosphorescence was amazing.” Jonah, aged 17, and who also is an offshore novice summarised his race: “It was a great experience with some incredible moments.  I would definitely like to do more offshore sailing.”

The little 1972 yacht has seen many adventures over the decades.

“We felt the resonance of RORC race team Janet Grosvenor’s words over the radio at the start when she said ‘Good luck to all your adventurers.’  Well, we certainly had an adventure.”